In Search Of Freedom

Part 2: In Search Of Freedom

That day is still vivid in my head even now, when my hair has gone so grey that if I were to pluck it there would be no more hair left on this small little head of mine. I was born fourth of eight children in a middle-class household in Vietnam in 1954. My Father was a National Bank manager and my Mother was a dutiful housewife all her life. In our war-torn country bombing and fighting were an everyday occurrence we had grown used to, and I knew that I would go into the army to fight the Communists when I reached the age of 17 to do the honour of protecting the country from the invading enemy. My oldest brother served with the Biet Dong Quan commandos and survived being shot countless times, while my second brother was in a bomb discharge unit and almost lost all of his fingers while on duty, but survived. I was a little luckier and did not lose anything other than having to use a crutch to the end of my days. I was wounded in the leg with heavy shot when serving in the Army’s 23rd Division stationed in the Kontum and Pleiku highland region. After staying for a while in Nhatrang Hospital waiting for release papers, a Military Medical Report classified me as Class 2 and useless for duty and I was discharged from the Army. 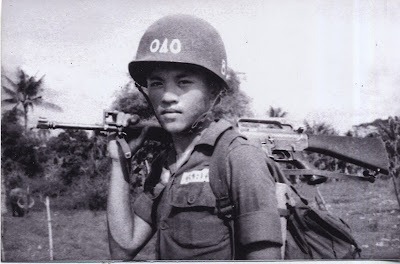 William training at Quang Trung, the Army Academy, in 1972. 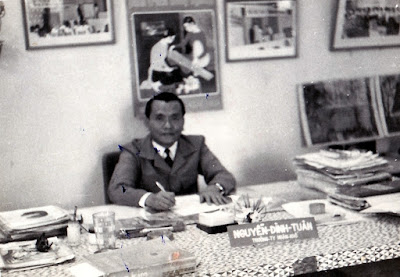 William’s father at work as Chief of the National Bank in Rach Gia. 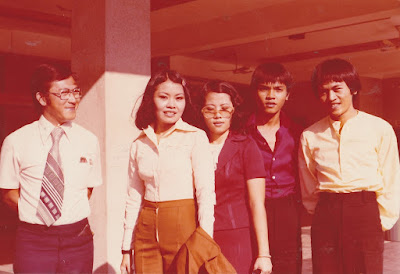 Farewell to William's older sister, Thuy, who was going to study in France.
Taken at Tan Son Nhat Airport early 1975.

Six months after my discharge, despite there being so many candidates, I proudly passed the exam to enter Saigon National Post Office College with the promise that I would be posted to work for the Government when I graduated. Whether I got a good position or a bad one, and whether I was posted far from or close to home depended on how successful I was during the grueling one-year training course which bombarded us with tests and mental assessments, so I was living in Saigon trying to finish the course.

At 11 am that day our class was dismissed early from school and I was so happy with my first monthly pay packet from the college of 18,000 VN Dong, which was equal to the pay of a low level Army Private at the time. “Man, this is going to be so cool when I get home and take friends out to a coffee shop to celebrate. Who else in this country is going to a school guaranteeing a job in the future and getting paid while studying? Only me, ha ha ha ha,” was how I felt at the time. By the time I got home after the struggle of riding through the chaotic traffic on my old pushbike, I was asking myself where such crowds of people were going, not realizing what was going to happen to my country in the next four days.

A letter from my eldest sister from Australia, sent a month earlier, had arrived with a very short note in Vietnamese saying “Take this paper and the photographs I included in the letter and hurry to the Korean Embassy to see Mr. Cho. He will help you and tell you what to do, and just do as he says.” My sister’s husband was a Korean citizen, and I later found out he and Mr. Cho, who was an important official at the Korean Embassy, knew each other well. The notes were asking for his help to get us onto an LST which was to embark at Tan Cang Port in Saigon.

Luckily, my two younger brothers, Bao and Phu, and my sister, Duyen, had been waiting for me at home so we could celebrate my first ever work pay from college, so we all headed to the Korean Embassy. At that time we did not know that we would be leaving our home forever, so we just took some basic clothing with us.

We had no form of transportation to take us to Nguyen Du, where the Embassy was, which was about three kilometers away from our home. It was such a chaotic time, but finally I managed to put all of us onto two xe om, or motorcycle taxis, with my sister and I on one and my brothers on another, and we reached the Korea Embassy after driving through the worst traffic I had ever experienced.
Upon arriving I thought, “Bloody hell, there must be a million people in front of the Korean Embassy!” The crowds of people were waiting to enter while Marines were checking passports and entry papers. There was no way I could get through with the four of us and it looked like you had to have some kind of paper to get through – something more official than the letter I was holding in my hand.

Looking around and feeling hopeless, I decided to get inside the embassy by climbing the embassy’s wall. I would show the letter to Mr. Cho while my brothers and sister slowly tried to get close to the gate, and then we would hope for the best.

Even though my left leg was still injured, with the skill of an ex-infantry soldier I managed to climb over the wall and run to the administration office. A few Korean Embassy officials stopped me, but when I showed them the photograph of Mr. Cho, they directed me to the office to see the man in the photo. I handed him the letter from my sister, and after reading it he quickly looked at me and said something in English but, even though I could read and write English quite well and I was a fan of modern pop songs by the Beatles, Paul Anka, and John Denver, there was no way I could understand him. I think the chaos from the gate may have made him impatient with me, but perhaps the content of the letter was so meaningful that he pointed at me and said, “YOU, HOW MANY?” Well, that I understood and answered “four” by putting four fingers up. He reached out onto the table and gave me four cloth patches with Korean writing and stamps on them. He then called another Korean man, said something in Korean, and that man took me to the gate. That's where I found my sister and brothers holding the steel bars, desperately waiting for me but not sure whether I was coming back or not. With help from the Korean man sent by Mr. Cho we were taken to the Embassy lawn where there were lots of buses waiting to go somewhere. I thought, “When in Rome, do as the Romans do,” so we did exactly what others were doing and got in line to get on a bus. Because there were no documents or anything allowing us on the bus other than those four patches with some Korean words on them, when we got on the bus we chose the back seats so that if something went wrong it would be hard to throw us off. On the bus there were lots of Vietnamese ladies married to Korean husbands, so we felt a little more comfortable when we heard Vietnamese being spoken all the way to Tan Cang.

There were two massive, scary-looking Korean LSTs (Landing Ship, Tank) warships docked at the pier. The Marines started to let people onto the ships, and as soon as I was aboard a ship I knew that a journey into the unknown was about to begin.

Though I was so tired from all the hassles of that day, I'm not sure if I got any sleep once we were settled on the deck of the LST. One thing I knew for sure was that the ship was moving, slowly, but it was moving, and my God, I knew we were saved. From the top deck of that massive, scary LST I saw my beloved Saigon passing way with every meter as the warship moved slowly away. It seemed like something was stuck in my throat and my eyes seemed to be a little blurry as I realized I was about to leave my country, the one which my older brothers and I had spilled blood for, and was instead becoming a runaway and not even sure where I was going. But the uncertainty of my future at that moment was really nothing compared to the knowledge of the punishment a former South Vietnamese soldier would suffer from the communists when they arrived in Saigon.

The fact that the warship was slowly heading toward Saigon Bridge comforted me so much because I knew that I would be free from any political conflict in the days to come. Whatever happened, I would be able to face it, and would have a “Que sera sera” attitude and a grin on my face from a thousand miles away.

In the past five or six hours so much had happened and I had been so full of adrenaline. I was exhausted, and I think I fell asleep by the time Saigon Bridge was out of sight.
Posted by matt at 3:22 PM