It was reported the other day (here as well) that


A court ordered the state, Wednesday, to compensate a New Zealander for urging her to undergo mandatory human immunodeficiency virus (HIV) testing under a now-lifted government regulation while working here as an English teacher.

In 2009, after working at an elementary school in Ulsan for a year, a native-speaking English teacher from New Zealand was offered a new contract and began the process of re-signing for another year. Well into the process she was told she would have to take another HIV and drug test. While she had been willing to take an HIV test for immigration purposes when she first arrived in Korea, she refused to take another unnecessary HIV test for renewal, and was not re-signed. She subsequently left the country, but challenged what amounted to her dismissal over refusal to take an HIV test by taking her case to the Korean Commercial Arbitration Board (which ruled against her) and the National Human Rights Commission (which rejected her petition).

With the possibility of these "domestic remedies" exhausted, she petitioned the UN Committee for the Elimination of Racial Discrimination (CERD), which decided to hear the case in 2012 and ruled in her favor in 2015, saying that E-2 HIV testing was discriminatory and should be stopped. It also ruled that she should be given "adequate compensation for the moral and material damages caused by... violations of the Convention, including compensation for the lost wages during the one year she was prevented from working." For more on this process and decision, see this post.

Having been given access to the decision, here are some of its highlights.

The court accepted the plaintiff’s claim for damages, including 24,000,000 won for the loss her expected wages salary, and 6,000,100 won for mental damage, and ruled that the defendant should pay this full amount (along with interest dating from June 20, 2018).

In its ruling, the court referred to the AIDS Prevention Act, as it was in force in 2009, according to which it was the government’s duty not to discriminate against HIV-positive patients, and employers were not to require HIV testing of employees. The Act also listed specific groups of non-Koreans who were required to submit HIV test results to the government before entering Korea, but the plaintiff was not part of such group.

[The E-2 visa HIV testing requirement was initially instituted in 2007 via an Immigration policy memo which, when challenged, the government said was perfectly legal but was quietly changed to an enforcement ordinance on April 3, 2009, almost a year and a half after testing of teachers began. This testing regime was never codified by amending the AIDS Prevention Act (or the Hagwon Act).]

The court also ruled that while the objective of the HIV testing was justified to protect the health of children, the defendant did not prove such testing was necessary, since there was no factual evidence that foreign English teachers were a suspect group, nor was there a reason to believe there was a risk of the plaintiff being HIV positive, particularly since she had already tested negative less than a year earlier.

The defendant argued that the statute of limitations had passed, but the court ruled that June 12, 2015, the date of the CERD recommendation, was the date to begin from, since the plaintiff had been unable to determine the illegality of the government’s actions until then. It also pointed out that the plaintiff had made continuous efforts domestically and internationally to abolish the HIV testing policy and to receive compensation for her damages, and had been vigilant in seeking her rights. Therefore the defendant’s argument that the statute of limitations had passed was against the principle of good faith considering the defendant’s continued denial of compensation to the plaintiff.

Though the court did not determine whether the CERD recommendation had any binding power, it took the unprecedented step of accepting the CERD decision as the determining factor in calculating statute of limitations.

It’s hard to believe that it took ten years to get to this point, but it may not be over yet. The government has 2-3 weeks to appeal the decision.

As well, the HIV testing policy, officially ended two years ago, is still being carried out at some hospitals. This is the test I received five months ago: 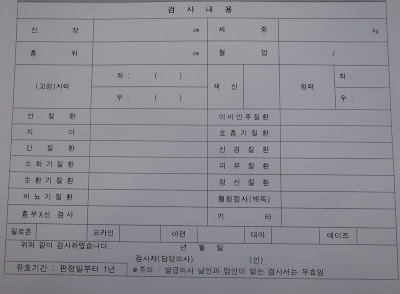 'AIDS' test results are to be recorded near bottom right.

I printed out and gave an attendant a news report in Korean announcing the end of the tests, but who knows if they did anything about it. Needless to say, that a national hospital is still carrying out these tests suggests the government did little to publicize the end of E-2 HIV testing.


[This was not the only challenge to the HIV testing regime. A case brought before the constitutional court in 2011 (which did not hear the case) was ruled favorably on by the UN Human Rights Committee in 2018.]
Posted by matt at 9:38 AM