Part 4: Storm Near Taiwan
Everything was going smoothly for us on the deck of the mighty LST warship. My sister got a job washing dirty clothes for some of the Vietnamese ladies with Korean husbands in exchange for a few dollars that we would need in the future. I asked her to do this because I was sure my 16,000 VN Dong was now a souvenir worth less than toilet paper on the “Ship to Freedom,” as I named it. My younger brother and I got a job writing letters in English for the Vietnamese ladies with Korean husbands. They wanted us to write letters to their husbands and, strangely enough, we were actually kept fairly busy doing this.
A few days, or perhaps weeks, later - I don’t remember exactly - after a Marine told us we were nearing Taiwan, a massive storm approached the two LST ships, and all of us on the ship’s deck had to go down below. The storm really affected us. Being civilians, we did not have any experience being at sea in a storm, so people around us were sick and vomiting and the conditions were really bad. My sister was unconscious and required emergency aid, and my brothers and I just lay on the floor and could not be moved. I think we stayed below deck for one or two days. The memory of our experience during that storm terrifies me even now, more than 40 years later. Just thinking about the smell of that space below deck, and the scene of people crying and being terrified still gives me goosebumps. A favorite past time in Australia, which I now call home, is deep sea fishing, but I associate that with one of my biggest fears.
I lost track of time and was not sure what day it was when I regained consciousness. Everything seemed to be quiet and calm, so I slowly climbed the stairs and gained access to the ship’s deck. There were already quite a few people up there. What a sight, I thought, what a wonderful sight of Mother Ocean after the storm. I was just speechless. Acting as if there might not be a tomorrow, I took the biggest breath of my life, trying to take as much air as possible into my chest as I absorbed as much sunshine as I could.
Everything went back to normal as we refugees reclaimed our spots on the deck. We had lost almost all of our clothes, however, because we had left them hanging out to dry when we evacuated below deck, including my favorite Levis jean jacket and pairs of jeans which I had treasured very much. All we had left were the dirty clothes we were wearing and a few of my sister’s clothes which were still in her suitcase, as well as a few dollars from working on the ship and the 16,000 VND sitting worthlessly in my pocket. Having passed Taiwan, the weather seemed to be a little colder at night compared to before the storm. When night fell, all of us wore my sister’s clothes under our remaining shirt and pants and then took them off when the sun came up in the morning. We knew we would have to do this until we reached Busan, but that was a week or two away. I was so worried because in Vietnamese, Korea was called Dai Han (greatest cold). I was not sure what would happen when we reached Korea, but I told my siblings “Que Sera Sera.”

*****
It should be noted that the experiences of the Vietnamese refugees leaving Vietnam for Korea was similar in some ways to the experiences of British and Australian POWs transported to Korea after the fall of Singapore. In August and September 1942, almost 1,000 of them were crammed into the ship Fukkai Maru and transported to Busan, stopping in Cap St Jacques (Vũng Tàu), Vietnam, and in Taiwan along the way. Much like what William and his siblings experienced, the ship experienced storms and even water spouts north of Taiwan, as depicted in the sketches below: 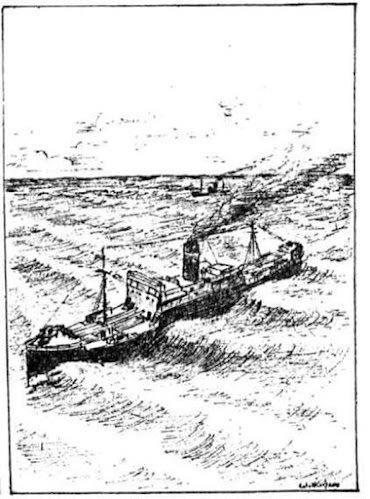 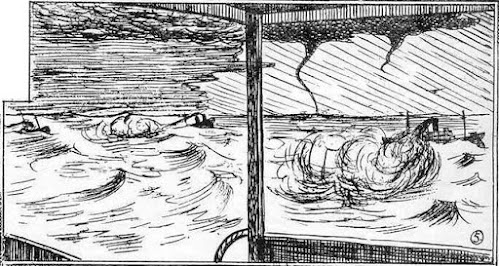 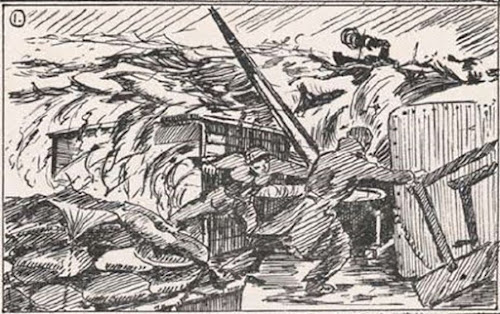 (The first image is from J.D. Wilkinson, Sketches of a P.O.W. in Korea, 1945, while the other two are from A.V. Toze and S. Strange, In Defense of Singapore: Scenes and Person Sketches Before and After the Fall of Singapore, 1947.)
Unlike the experiences of the refugees, 17 POWs died within weeks of their arrival in Busan, and for the survivors the 40-day trip was the worst memory of their captivity.
In the cases of both the POWs in 1942 and refugees in 1975, Busan's residents were asked to come out and jeer at the POWs and cheer for the refugees, respectively.
Posted by matt at 3:30 PM