A video went viral over the weekend, showing an Italian person stopping his car in the middle of the road, getting out and while shaking his fist, spewed what sounded as obscenities. The scene was captured in the "black box" camera of the car behind him. The woman in that car was quoted by a cable channel as saying, "He cursed at me but I didn't get out for the fear that he would physically harm me."

The man, a resident in Korea, was outraged when he was honked at when cut in on the Olympic Expressway near the Seongsu Bridge at around 3 p.m. Sunday. He was booked without physical detention for endangerment by a sudden change of lanes. The police sent the case to prosecutors with a recommendation for indictment.[...]

They may hope that they will be given the benefit of extenuating circumstances for not promptly keeping abreast with a law change, introduced last month, which has strengthened penalties significantly after a number of road rage cases involving Koreans.

Good to hear such laws have been passed. This SBS report documented two more foreigners misbehaving on the road, asking "Just because you live in Korea, does it mean you have to emulate even our rough driving culture?" [Hat tip to Robert Koehler.] 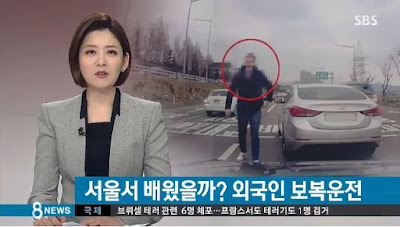 Did they learn it in Seoul? Foreigner retaliatory driving.

Best not to copy such behavior, though, since the result might be this:

It was pointed out that the Korea Times columnist who wrote "Ugly Foreigners" (Foolsdie!) also wrote a column called "Ugly Koreans," which perhaps leads one to cancel out the other. However, the column opens with this: "The situation facing Koreans in the Philippines may be aptly compared to 'ugly Koreans in the land of outlaws.'" The article portrays the Philippines as violent, dangerous and corrupt; the mistake these Korean citizens who get murdered there (more than in any other country outside Korea) have made was to move to such a dangerous place; only brief mention is made that "the tendency among some Koreans to look down on people from Southeast Asia may have also been in play."

For an actual look at 'ugly Koreans,' perhaps try here:


The Korea Communications Standards Commission warned the nation's No.1 portal website Naver to use"voluntary restraint" after it posted video links to the drama entitled "Lily Fever," according to Hankook Ilbo, Monday. The mandate came after netizens reported the drama's bold portrayal of homosexuality.

The watchdog was cited as saying homosexual love scenes in the drama "incited sexual curiosity and tempted viewers to imitate the acts in practice" thus "violating social orders in terms of ethical values."

As for misbehaving foreigners, this photo appeared the other day of 'daredevils' Vitaliy Raskalov and Vadim Makhorov at the top of Lotte Tower, on its way to reaching a height of 555 meters and 123 floors (it would already be considered South Korea’s tallest building if not for the powers that be not counting buildings unless they're finished - thanks a lot, Pyongyang's Ryugyong Hotel!).


After the 20-year-old Raskalov updated his Instagram account with a photo of his feet precariously atop Seoul’s Lotte World Tower, Sunday, the Korean public responded with fierce criticism of his “reckless” and “irresponsible” behavior. [...] Users left lengthy tirades under Raskalov’s photo in Korean, admonishing the adventurer for what they saw as unwarranted entry into private property, which could have resulted in disastrous accidents.

One Korean user with Instagram handle “heuum_” called Raskalov “an unarmed IS soldier” in the sense that he poses a threat to the safety of innocent people around him. “He’s being a nuisance in a foreign country. Safety is the utmost principle at a construction site. He is thoughtless to be doing this without safety measures,” heuum_ said. [...]

Lotte World Tower authorities had been wary of Raskalov and Makhorov entering its premises ever since it was reported the two were traveling in Korea. Roughly 400 security agents had been stationed around the construction site.

Well, that's embarrassing, then. As the Korea Times notes, the site even had posters up telling them they were banned from the building. How that didn't work, I've no idea. On the bright side, at least they weren't leaving graffiti.
Posted by matt at 4:45 AM