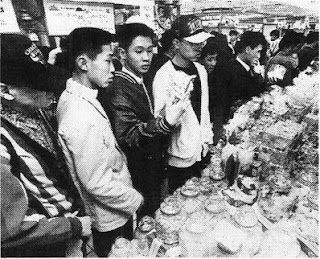 Men check out the candy selection at L Dept. Store on White Day, 1993 (from here).

Today is White Day (well, it's the 14th in the US), and I was made to think of it during a presentation in which a classmate spoke on this post about Valentine's Day and White Day's origins (note that it gives only the origin of the former; one assumes the author didn't want to draw attention to the Japanese origin of the latter). Also mentioned in the presentation was the list (similar to this one) of "__days" which occur on the 14th of each month in Korea, though I don't think anything beyond white and black day exists outside of such internet posts.

The first mention of White Day that turns up in the Naver News Library is this Hankyoreh editorial from February 14, 1989, titled "Behind chocolate hides a cunning business ploy," which concludes by saying that companies conjuring up White Day to make kids pay twice is improper.

It's mentioned twice in 1991 in a column the Maeil Gyeongje published written by people describing their married life. This one describes how the writer's husband forgot her birthday and said he'd celebrate it on the lunar calendar, and seemed to forget again but eventually surprised her with roses. She notes that he always gave her presents before that, even on "white day, a day he criticized as one made by merchants in order to sell candy."

The most interesting reference I found in 1991 was this one in the Kyunghyang Shinmun on March 11 titled "日(일),야광女子(여자)속옷판매 화이트데이 선물용: [In] Japan, glow-in-the-dark women's underwear sold as white day present." As the article puts it, "For the coming 14th (white day), a women's underwear company in Japan plans to sell 400,000 pairs of glow-in-the-dark panties to Japanese men wanting a present that their lover will never forget."