The countryside is no longer safe from foreign teacher drug addicts

On November 28 Yonhap broke the following story of a foreign teacher busted in Gyeongsangnam-do for smuggling in DMT via international mail. NoCut News' story, is, of course, far more amusing:


Elementary and middle school native speaking teacher smuggles in raw materials for, produces and takes new kind of drug
New kind of drug with powerful hallucinogenic effects easily produced... "From now on the provinces are no longer a drug-safe zone." 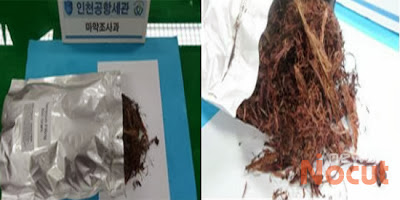 A native speaking teacher working at elementary and middle schools was caught by prosecutors for smuggling a large amount of a plant that is a raw material for a new kind of drug and taking it.

The special unit of the Changwon Prosecutors' Office arrested A, a 24 year old British native speaking teacher working at an elementary and middle school in Changnyeong-gun, Gyeongsangnam-do, for smuggling 1075 grams of the plant from which the psychotropic drug DMT is made, and for keeping and taking it in his home.

At the beginning of November, A ordered 1075 grams of the plant from which the psychotropic drug DMT is made from a seller in the Netherlands via the internet, paying $134 US for it, and it was caught being smuggled via international mail at Incheon International Airport on November 12.

He is also being charged with keeping at his home and taking drugs like DMT, LSD, marijuana, and 5-APB.

As drugs with strong hallucinogenic effects, dimethyltryptamine and LSD are classified as psychotropic drugs under item 1, article 3 of the Drug Control Law. In particular, LSD is known to have a hallucinogenic effect 100 times stronger than Cocaine and 300 times stronger than methamphetamine. As well, 5-APB is a new kind of drug that has recently been used in Europe.

A, who started working as an elementary and middle school native speaking teacher in May, graduated as an English major from a prestigious school in the UK but stated that he became absorbed in religion and took drugs to commune with god in a hallucinogenic state.

In particular, A processed the raw material plant for DMT into the finished product himself. Prosecutors are looking into the crimes he committed while taking drugs over this long period of time.

As prosecutors have seen a significant number of cases in which the raw materials for drugs have been bought over the internet and smuggled into Korea using international air mail for production and use here, they are planning to expand their investigation.

Prosecutors are paying attention to the fact that this new kind of drug which was seized for the first time in Korea, was not found in a large city or in the capital,

One prosecution official said, "Since the kind of drug we seized could get hundreds of people high at the same time, from now on the provinces are no longer a drug-safe zone."

As always, NoCut News - the (Christian) news outlet that produces the most negative stories about foreign teachers (after Yonhap and YTN combined) - doesn't disappoint, what with (most likely made-up) quotes like "from now on the provinces are no longer a drug-safe zone." I also chuckled heartily at the assertion that "cases of native speaking teachers, whose identities cannot be accurately confirmed, taking drugs [is] increas[ing]."

Especially since this is only the second foreign teacher to be reported being arrested for drugs this year. The only other case was an American teacher arrested on May 30 for smuggling pot visa international mail on two occasions (3 grams and 9.5 grams), with the latter occasion involving sticking it in a jar of peanut butter (which got him caught).

But yes, cases of foreign teachers getting caught for drugs are increasing! Say it enough times and it might become true, NoCut News!

As for this guy who got busted, if they can't prove he shared it with anyone, I'd be curious how the court would react to his defense. Considering the little illegal pharmacy he had at his house, I'd imagine not too well, but courts have been more lenient when it comes to drug smuggling in recent years, as long as people weren't sharing or selling it.
Posted by matt at 5:33 PM

Correct me if I'm wrong, but didn't we get a similar story about the provinces becoming a lawless drug zone for foreign teachers about year or two ago?

And just today renewing NETs in Daegu were informed by email that due to an increase of foreign teachers using drugs, all foreign teachers must now take drug tests upon accepting positions with public schools. Though I was under the impression that they were being tested for drugs previously. Regardless, DMOE felt the need to inform NETs of the drug binge their colleagues are engaging in.

I think this story is related to this post on waygook.org.

Not sure if you were being sarcastic or not, but it actually is an excellent defense.

Also, technically speaking, the item the teacher had mailed to himself isn't "DMT" (dimethyltryptamine). Rather it is a plant banisteriopsis caapi better known as ayahuasca (or hoasca), which translates as the "vine of the soul". It is used in combination with other plants to create a tea that contains DMT and is used in spiritual practice to commune with god by the above mentioned church.

Also, ayahuasca is certainly not "a new kind of drug" as the article states. But an ancient sacrament originally used by indigenous peoples in the Amazon region.

Interestingly, the case in the US came about in the same way as the Korean one. The ayahuasca was mailed to the US from a foreign country (Brazil) where it was seized by US authorities. The US gov argued that 1) having ayahuasca shipped into the US violated an int'l treaty, 2) was dangerous, and 3) it's use was addictive and likely to spread to users outside the church.

The US Supreme Court disagreed on all counts. The opinion is here. For those interested, oral arguments and the reading of the decision (well worth listening to) is here.

A Netherlands court came to the same conclusion about the religious use of ayahuasca in 2001 where it was found to be protected by the EU Conv. on Human Rights as a "right to . . . manifest a religion or belief in worship, teaching, practice". (Though a more recent decision by Netherlands High Court cast the earlier decision into question.)

On recalling that the original post points out that NoCut News is a "Christian" news outlet, I'm especially surprised that they didn't explore the teacher's claim to be using the substance for religious (presumably Christian) reasons more attention.

In the US case I mentioned above all of the following religious organizations submitted amicus briefs to the US Supreme Court supporting the União do Vegetal (UDV) Church:

The Catholic Bishops of North America, The Joint Baptist Committee, The National Council of Evangelical Christians, The Presbyterian Church of The United States, and The American Jewish Congress.

Not being sarcastic at all. Somehow I don't see it working as a defence in this case however; dude will be detained for some time than quietly deported.

That would be a decent solution.

sadly, I hope he will, since it will only demonstrate that there are no religious freedoms for waegs, indicative of how we have no rights and freedoms regardless of individual contribution. . . just another subclass of human, fulfilling the revenge fantasy of every Korean who immigrated to run a dry cleaner regardless of their degree from SNU