Did the Ministry of Defense declare 'Arirang' a subversive song?

From the Kyunghyang Sinmun yesterday:


Ministry of Defense designates 'Arirang,' a song that even President Park loves to sing, a 'subversive song' 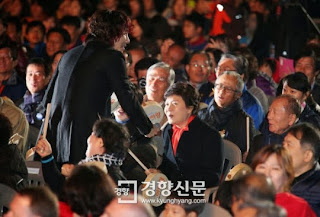 According to the article, of the 50 songs included on the list of subversive songs the Ministry of Defense included mostly songs calling for peace or reunification such as "Our Wish" or "Come the Day," but among these were also included four traditional folk songs, "Arirang," "Nodeul Riverside," "Miryang Arirang," and "Ggaturi Taryeong." As a result, these songs cannot be sung at noraebangs on military bases and even at some commerical noraebangs.

As this has become known it has led to criticism on the internet. Sungshin Women's University professor Seo Kyoung-duk, the Korea promoter who last year led the movement to have Arirang registered with UNESCO as an intangible heritage asset, wrote, "Last year I put a lot of effort into having Arirang registered as part of UNESCO's Intangible Cultural Heritage of Humanity, such as placing one-page ads in the Wall Street Journal and New York Times, but now that you can't sing it because the Ministry of Defense has designated it a 'subversive song'... I really don't have the words! Anyway, lets have civilians work together to protect Arirang."

The Ministry of Defense issued a statement saying "Other than North Korean songs, the Ministry of Defense has not requested the deletion from noraebang equipment of a group of normal South Korean songs." "Since around 2004, requests could be made by front line commanding officers according to their own judgement for noraebang equipment supplied to bases to have songs removed that are judged to be unsuitable for soldiers to sing." "After this, used noraebang equipment from military bases has been found to have entered the open market without being restored to its original condition."

Prior to this, while watching a performance held in the Blue House Garden titled 'Our flavor and style for cultural prosperity - Arirang,' President Park Geun-hye sang 'Arirang' with singer Kim Jang-hun.

The original MBN TV report is here. So... are we dealing with a heavy handed military here, or irresponsible, sensationalist media? Or a little of both?

While considering that one of the less-than-positive legacies of the current president's father was the destruction of much of the popular culture which is now drawing attention to South Korea (see Mark Russell's essay here, for example), including the banning of songs, widespread arrests of musicians (under the rubric of a 'war on marijuana'), and the destruction of much of the early 1970s rock music scene, it's likely not entirely fair to connect her personally to this story (especially if we take the military at their word and take into account that military units have been asking for songs to be deleted since the Noh Moo-hyun era), even if I might really like to...