A heartwarming tale of blue-eyed Santas

The Gangwon Ilbo yesterday reported on a heartwarming tale of volunteers at an orphanage in Chuncheon:

The orphanage was warm as blue-eyed Santas arrived

A surprise visit carrying a bundle of presents; they also made cookies, sang carols and had a Christmas party with the children 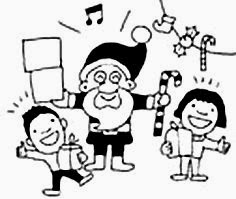 "Christmas was fun with a Blue-eyed Santa"

In the midst of a cold snap, native speaking instructor James (37) and 24 of his friends visited an orphanage in Chuncheon on the morning of December 21. In one hand they had presents, while the other was full of different kinds of food, and when they entered the front room of the orphanage, the children cried out 'Wow!' and ran towards James and his group.

That day James and his friends called out the names of the 48 children at the orphanage one by one and gave each of them a present. They had received a list of the toys, clothes, shoes and dolls that the children wanted from the orphanage and collected money to buy the gifts they gave out that day.

After that, they had a great time playing soccer with the children in the small playground in front of the orphanage and also sang Christmas carols and made cookies and snacks with the children until late afternoon.

When this was all finished, the children thanked James and his friends and gave them a hug goodbye. One eleven year old staying at the orphanage said "I lost track of time while playing with Mr. James." "Though I can't speak well with him, I love him."

James, the blue-eyed Santa loved by the children at the orphanage, came to Korea from the US to work as a native speaking instructor in May of 2009. Since then he has worked at places such as Wontong Elementary School and Hallym University. James, who planned the community service activities, learned of the orphanage in Chuncheon by chance in March of 2010.

James said, "My friends and I were concerned about doing something meaningful this Christmas so we looked for an Orphanage." "My native speaking instructor friends are thankful we were all able to do something good."

An official at the orphanage said, "As the end of the year is a lonely time, it was a much appreciated gift for the children." "I want to give my thanks to James and his friends who never forgot and sought out the children."

It's nice to see the Christmas spirit alive and well in Chuncheon. And to see that it was considered worth reporting by the Gangwon Ilbo.

Apparently the Christmas spirit is alive and well in Mokpo as well; this is the sight that greeted me upon arrival this past weekend: 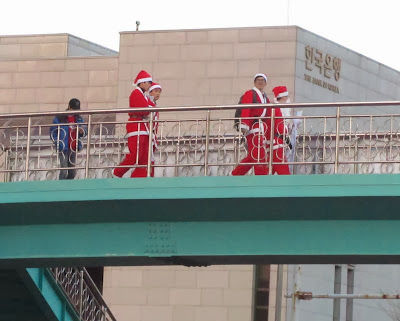 (Not shown: Four more standing across the street at the crosswalk.)

And for a more cynical (if humourous) look at Christmas visits to orphanages in 1965, a story by James Wade can be read here.

I wish all of my readers a merry Christmas and a happy holiday season.
Posted by matt at 1:38 PM