As it turned out, there was much more to this story than first appeared, and the video itself was staged, as these posts - and the comments below - make clear:

[Original post - originally titled: 'Your assholery for the day']

That's about the kindest way I can describe this:

Though the tweet - and many of the Korean commenters on Facebook - describes them as Americans, the guy pictured below has a clear Irish accent, and one of the other guys (not the one holding the camera) may have a Canadian accent (though it's hard to know, really). I'm curious where the video originally came from before being posted to Facebook (or whether it was posted elsewhere on Facebook and embedded on the linked page. And I could say that I'm curious what they're doing in Korea, but if they're not tourists, then we can probably take a good guess as to what their jobs might be - and the Irish guy is certainly not with USFK. According to Immigration stats from May, of 1,037 Irish in the country, 644 were on E-2 visas. 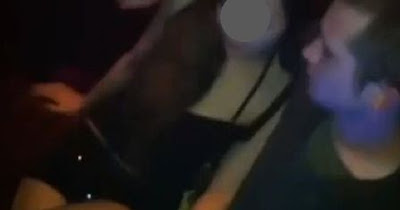 It's not like this hasn't happened before (here are two incidents off the top of my head). I really can't fathom what makes someone think, 'Hey, here's a video of us being misogynist, racist douchebags - let's post it online!' But then, 'think' is such a strong word sometimes, isn't it?
Posted by matt at 7:23 PM

Man, that was pretty degrading.

There is something truly pathological about how these neanderthals interact with this woman. Unhinged by her beauty and friendliness they are compelled to degrade her.

She looks like she's drugged. The bar is fairly empty and they call her a "hooker," so she may be a juicy girl, possibly somewhere in It'aewon. After all, if it were at a real bar she would at least be with another friend as Korean girls don't generally go out drinking alone. However, most juicy girls don't actually drink alcohol, but rather juice (or tea), hence the name. Wonder if they slipped her some Rohypnol as part of a prearranged plan to humiliate her, or possibly worse?

It crossed my mind that it might be in a juicy bar - it's impossible to know for sure, though.

Those punks sure did a lot of "talking," after all.

Fisher followed up with an article in the WaPo:
http://www.washingtonpost.com/blogs/worldviews/wp/2013/07/15/koreas-web-community-roiled-by-shocking-video-of-western-men-tormenting-a-local-woman/

That Fisher story is a joke. "Hey, I saw a video on the Internet and sent the link to a few random people and fellow bloggers and here's what they had to say. Now pay me!"

Here's what a real journalist would do: They would track down the identity of the woman in the video, the two men abusing her and the club. How would they do that? Well, if it was uploaded onto Facebook, contact the owner of the account and ask them how they obtained the video. If it was deleted from YouTube, contact YouTube and ask them about the account holder or their IP address and proceed from there. If the journalist is in Seoul, proceed to nightlife areas popular with expats such as It'aewon or Hongdae with screen-grabs of the club that appears in the video and show it to informed locals, and see if they can help identify it. Do some freakin' legwork for once!

I agree with commenters below the Fisher story who demand that the video be verified first before further running with the story and blowing it up all out of proportion. It could indeed be a North Korean propaganda production, or an attempt to smear Americans or GIs in Korea by a individuals from another country.

Who's to say? Well, definitely not Fisher, it seems!

BTW, the uploader of the video on Facebook is one "Moodclip": https://www.facebook.com/moodclip

I'm not on Facebook but certainly someone who is could easily contact this individual and find out how they obtained the video and proceed from there.

There are a lot of suspicious things about this video that don't add up. I'm close to thinking this was filmed in a Korean-style nightclub because one can hear dance music coming from another room. Obviously Western-style danceclubs in It'aewon or Hongdae don't have these kinds of private rooms.

However, if it is in fact in a Korean-style nightclub, and she was "booked" there by a waiter, meaning she was just an ordinary customer, the two young guys in the video would have had to drop a minimum of a couple hundred thousand won to pay for the room, anju and drinks. Does that seem likely? And does it seem likely that they possessed enough Korean language skills and Korean cultural "know-how" to gain entry in the first place?

Moreover, the fact that she starts out the video with her arm draped around the main guy's leg is a classic hostess move that is done almost habitually and doesn't really mean anything. Yet a professional hostess would be unlikely to let herself get so drunk. And if it is indeed in a Korean-style hostess club, again, the two guys would have had to drop quite a bit of coin and been culturally and linguistically adept enough to gain entry into such an establishment. Likely? Not really.

So again, we are back to the most probable scenario: A juicy bar in It'aewon, given that the girl's dress and make-up seem too sophisticated for a working girl in a "ville" in the Korean countryside. Yet as I mentioned before, Korean juicy girls are all business and almost never actually drink alcohol. So then why does she seem so out of it in the video? There are two plausible answers:

1. She was drugged by the two guys in the video.

2. The video is actually a hoax, and was staged in a Korean-style nightclub or hostess club with unknown facilitators.

If the latter in indeed the case, what was the motive? One thing is for sure: The two guys who filmed the video are certainly not the ones who helpfully added Korean subtitles -- guaranteed to provoke Korean "Netizens" lacking in English fluency.

Moodclip, where are you? What do you have to say?

This recent comment today on the Fisher story basically backs up my above deductions:

"This is a video made in Bedlam bar in Itaewon in January 2011. All the people were paid actors / actresses. The director is Korean and wanted to get famous for doing some edgy viral videos. This is one of them. He tried to release this over 2 years ago and nothing happened all the websites took it down for its graphic content. I know all this because I am one of the men in this video. I do not condone the actions that I did. But this was a paid acting job no one was hurt. The actress was wearing fake gums to make her teeth look bad and everyone left the shoot smiling and shaking hands.
I have passed on this webpage to the director asking him to come forward. It is up to him if he wants to reveal himself. 2 and a half years ago he wanted this kind of fame I do not know if it will do his current career any good." (Poster ID: thelastknownsurvivor)

As I have said, the most likely setting was a juicy bar in It'aewon, which doesn't add up since those girls almost never actually get drunk. The director probably had little knowledge of this, and hence the seeming incongruity.

Where is Max Fisher based? Evidently not Korea or else there would be a Seoul byline by his name. Where is "T.K. Park," b.k.a. the world-famous blogger of "Ask a Korean," based? Oh, right, he's a full-time lawyer in Washington, D.C. who's probably never set foot in a juicy bar in his life, and moved to the U.S. when we was all of 16 years old, yet is somehow a noted Korean cultural authority regularly quoted by the American MSM.

When you have so-called journalists not based in a country "reporting" on affairs there, and quoting "sources" who aren't even based in the country, either, what else can you expect?

I'll tell you exactly what: Fake news that is evidently as fake as the video in question.

Of course, the story is still not over, but the comment of "thelastknownsurvivor" must now be refuted if the Netizens still want to carry on with their little hatefest, I'd say.

Hey Max Fisher, why don't you visit Bedlam and see whether or not you can verify the claims of "thelastknownsurvivor"?

Oh, right, you can't, because you're not even in Korea, are you?

And that, my friends, is the difference between a blogger and a real journalist.

Here's another prediction for everyone out there: If the claims of "thelastknownsurvivor" do indeed hold up, I'll bet that Max Fisher's retraction gets barely a fraction of the clicks on the original video.

Hey, why let the facts get in the way of a good story, right?

Clarification: Bedlam is not a juicy bar but a regular "hookah" bar in It'aewon, and one which I have never personally visited. (Indeed, when I first saw the video, the decor reminded me of Bricx in Hongdae.) In any case, if we can take "thelastknownsurvivor" at his word, the video still does not hold up because Korean girls don't generally drink alone and the bar was curiously deserted -- much like a typical juicy bar, in fact. (Perhaps they filmed after hours or on a slow weekday night.) No matter how you slice it, it was an artificial situation, and rightly deserves to be questioned rigorously.

Clarification of previous clarification: Just remembered that I did in fact visit Beldam one time last year, but it was at 4am on a Sunday morning and I was too drunk to register the name. Kind of a cool place, but a bit pricey -- a bit too pricey and upscale for shit-stirring GIs, that's for sure.

Just posted on this citing your comments - thanks. And as I say there, Bedlam seems a plausible location.

I'm not sure I follow the logic of why you think the video is fake. You state: (1) That you believe the two men in the video to be GIs when in fact one of them has an Irish accent. (2) You seem to believe that it's a juicy bar when in fact it looks exactly like a room at a Korean nightclub. (3) You doubt that these two douches could afford to pay for a room at a club much less be allowed entry. In fact, it's not really that unusual these days to see foreigners in Korean clubs. (4) You find it strange that the girl is in the room alone. It looks pretty obvious that this was a "booking" situation and that she is blitzed on booze rather than drugs.

In this case, the most obvious explanation seems to be the correct one: these two morons were at a Korean night club and acted stupid because they were young, drunk, and have serious misogynistic as well as xenophobic issues.

"I'm not sure I follow the logic of why you think the video is fake."

You're a day late and a dollar short, my friend. A lot has happened in the last 24 hours. Check out Matt's most recent post on this matter, for instance.