It's nice to see prosecutors going after Chun Doo-hwan's money, even if it is 15 years late. As the Chosun Ilbo reminds us,


In 2003, prosecutors obtained a court order requiring Chun to reveal the size of his assets and seized a portion of his residence and other assets and put them up for auction. At that time, Chun claimed he only had W290,000 left.

In further signs that Korea's patience with the ex-ruler is running out, the National Assembly last week passed a bill extending the statute of limitations on corruption in office to ensure he does not slip through the net. It also allows the forfeiture of assets illegally gained by family members or acquaintances.


The investigation into Chun's assets has been gaining traction recently since the National Assembly passed a bill in June aimed at extending the statute of limitations on forfeiting and imposing fines on public officials' illegal wealth from three years to 10.

Under the revised law, Chun will be required to pay the remainder of his fines by October 2020, not October this year.

Other Chosun Ilbo articles, like this one, say that a safe was discovered, but was empty. On the bright side, the numerous art pieces and artifacts the raids have turned up have convinced the court to issue more search warrants, which include even the homes of former secretaries. As well, many of Chun's friends and family have been slapped with travel bans (though not Chun hinself).

Another Korea Herald article also looks at how his children are being targeted and the art pieces the prosecutors have been pulling out of storage, while this article looks at the dark era of Chun's rule. It erroneously states this, however:


The incident in which hundreds of citizens were killed provided the grounds for his death sentence in 1996. Chun was, however, pardoned later in the same year.

Chun was never found guilty for what happened in Gwangju. He was sentenced to death for his 1979 coup, but Kim Dae-jung pardoned him shortly before ascending to the presidency. I imagine there were many in Gwangju who disagreed with the pardon. As for the dark era of Chun's rule, I was recently given a stack of documents from the early 1980s by someone who was in Gwangju during the uprising, including a petition to the UN Human Commission on Human Rights about human rights abuses in South Korea. With it's reports of soldiers in the streets, daily intimidation, arrests, and torture, it does not make for pleasant reading.

Even before the extension of martial law on May 17, 1980, and the Gwangju Uprising which began a day later, the atmosphere in Seoul after Chun's December 12, 1979 coup was, as a long term expat told me, "days of intimidation, nights of terror." He also described seeing a soldier on a street corner near his house smashing a salary man in the face with a rifle butt and throwing him in the back of a truck for not being polite enough to him (saying '나요?' when the soldier yelled in his direction, instead of, as the soldier suggested before smashing him in the face, "저 입니까?").

It truly is difficult for someone who was never here at that time to reconcile the stories of the 'black republic' (as director Park Kwang-su termed it), and Korean society today, that 33 years ago you would have passed tanks and soldiers in the streets on your way to work.

And thinking of Chun, who was responsible for it all, I just remembered Hunter S. Thompson's obituary for Richard Nixon, (influenced by H.L. Mencken's obituary for William Jennings Bryan) titled "He was a crook" :


If the right people had been in charge of Nixon's funeral, his casket would have been launched into one of those open-sewage canals that empty into the ocean just south of Los Angeles. He was a swine of a man and a jabbering dupe of a president. Nixon was so crooked that he needed servants to help him screw his pants on every morning. Even his funeral was illegal. He was queer in the deepest way. His body should have been burned in a trash bin.

In other words, regarding the prosecution raiding Chun's houses in front of the cameras of the media, and those of his relatives, and slapping travel bans on the suspects, it's about fucking time.

There was never any need to treat him like this: 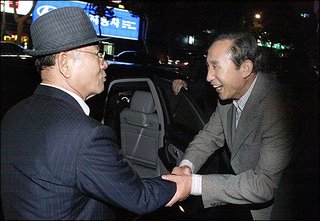