On July 5, the Munhwa ilbo published the following article (hat tip to the Marmot):


Foreigners are only white... on holidays only women prepare food... textbooks which teach 'prejudice'

'Foreigners who speak English are all white and holiday food is only prepared by women...'

It's been revealed that textbooks used by elementary, middle and high schools still encourage stereotypes about gender roles and foreigners and include illustrations and writing which give no consideration for the weak, such as disabled people.

According to the National Human Rights Commission on July 5, a 'textbook monitoring group' composed of 100 teachers and students found that the majority of elementary, middle and high school textbooks present cooking or consumption of goods as mostly being done by women, and contained writing and illustrations which strengthen prejudiced gender roles, such as fixing in place gendered professions.

For instance, one elementary school 'correct life' (Morals?) textbook had illustrations showing the preparation of food at Chuseok which portrayed only women preparing the food for ancestral rites, while a grade 3 middle school morals textbook used the phrase "three married [결혼한] sons and a married [출가한] youngest daughter," which has different terms describing marriage for sons and daughters, and also uses, and doesn't filter out, the phrase "Daughters leave the family, so there's little use in raising them."

Many instances of illustrations promoting gender stereotypes regarding employment were also pointed out. In one elementary school English textbook, doctors and bus drivers were only men, while nurses and pianists were only women. A high school society and culture textbook depicting the scene of an election campaign shows all candidates to be men, while women are only supporters, creating concern that they instill the idea that politics exclusively belongs to men.

As well, it's been pointed out that pictures which illustrate working life, and mostly show only men, equate 'men' with 'jobs.'

Inhumane writing which gives no consideration for the underprivileged has also been confirmed. Illustrations in elementary, middle and high school English textbooks show many foreigners, but most are white and black people are rarely shown, revealing 'white-centrism.' One elementary school morals textbook has a photo showing locals opposed to building a welfare center for disabled people, and there is concern this could instill in children a negative consciousness regarding welfare centers for disabled people.

In addition, in a middle school technology and home economics textbook, the first method it offers in overcoming ostracism is to 'find the reason why I am being ostracized,' explaining it as if the reason is due to the student suffering the bullying.

An official from the National Human Rights Commission said, "We advised the Ministry of Education to make the relevant revisions and received the reply that these will be reflected in future changes in the curriculum. " "We plan to continue pointing out text or illustrations which could promote negative social prejudice."

It's nice to see the NHRC drawing attention to this (for examples from twenty years ago, see this post by the Metropolitician). One of the English textbooks I use depicts people working different jobs, and while it's certainly more male-dominated, it does depict women as astronauts and doctors, and a man as a pet clothes designer (WTF, indeed).

All of the English textbooks I use have a token black character, and as I pointed out here, things have gotten better; compare these two depictions:

The pre-2010 English textbook (parodied at the blog Black Peter): 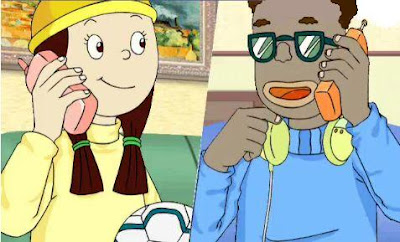 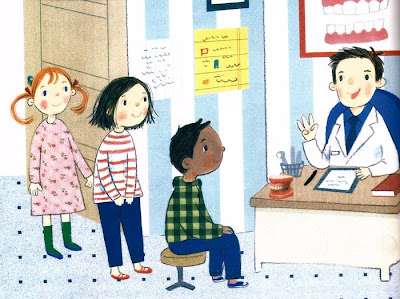 But, at the same time, some offensive images can still be found, such as in the Chunjae Gyoyuk Grade 5 English textbook: 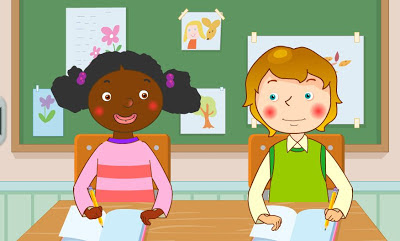 What was interesting about this image was that the grade 5 students laughed at it. When I asked them what was so funny, they said she was very ugly. Before you jump to conclusions, I have to point out that they never reacted that way when other black characters were shown - only at this one. So I think even they could see that the depiction of this black person in particular was 'ugly.'

I had to chuckle at the fact that the Munhwa Ilbo's cartoon accompanying the above article about textbooks with prejudiced illustrations depicted a white American male with a big nose, and even put in those little lines accentuating his nose. 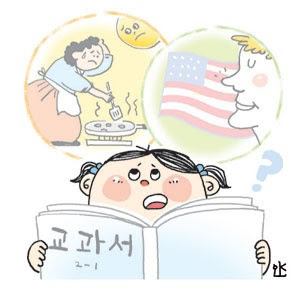 On the other hand, it's a step up from the last Munhwa Ilbo cartoon I posted depicting a white male: 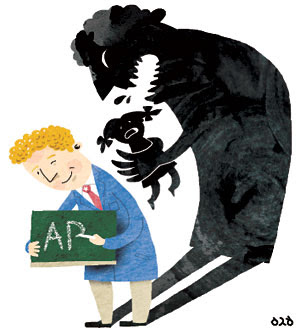 Come to think of it, the National Human Rights Commission might find 'prejudiced illustrations' in other places, if it were to look.
Posted by matt at 4:36 PM

I liked how the topic of foreigners is included in the paragraph about the underprivileged. So I looked up the definition of underprivileged: "Not enjoying the same standard of living or rights as the majority of people in a society." Oh.....

This is an interesting posting. I was shocked when I saw "It's been revealed that textbooks ... which give no consideration for the weak, such as disabled people." Disabled people may be disempowered by society, but the vast majority of disabled people I know (myself included) do not consider ourselves as "the weak". It looks like it's going to take a while to turn attitudes around.

I've met a couple of gay Korean men, here in London, and been shocked by their (self) oppressive attitudes. Given what you've written about prejudice regarding gender, race and impairment, it is understandable that human rights for LGBTQ people probably takes a back seat!