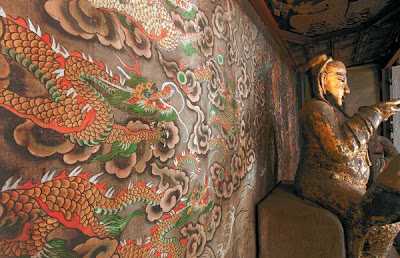 The Joongang Daily reported that a recent report by Jongno District Office about relics at Dongmyo shrine revealed that hidden behind a screen for centuries was a painting of nine dragons:


The painting - measuring 2.75 meters (9 feet) in height and 4.95 meters in length - was discovered in October 2011 as cultural artifacts experts were doing an inventory of artifacts at the shrine. The painting was on a wall behind a gilt bronze statue of Gwanwu (160-219), a legendary warrior from China’s Three Kingdoms period (220 ? 280) and also the subject of worship by some Chinese believers.

A folding screen showing a landscape in seven parts had been placed over the wall painting and nailed to the wall.

“Judging from the condition, it appears the painting has never been uncovered or removed from the wall since it was created in the 17th century,” said Jang Gyeong-hee, a professor of cultural heritage conservation at Hanseo University’s fine arts department, who wrote the report.

“Thanks to the folding screen, air was blocked and dust was kept away, allowing the colors to remain vivid all these years.”

Photos of the dragons can be seen here: 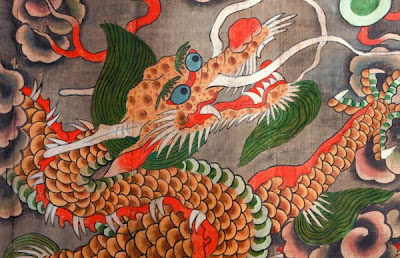 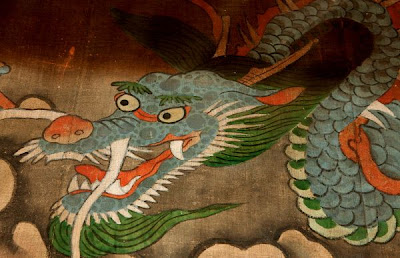 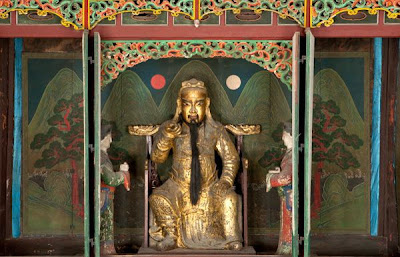 As the final photo reveals, however, the screen has been put back in place, which has raised concerns from academics who wish to study the painting.

Interesting. The colors of the dragons are quite intense compared to that of the screen. I wonder what the logic was in obscuring such art, and dragons at that, as they are celestial creatures imbued with fortune and bestow blessings.