On January 17, the leftist website Voice of the People published an article about the English Spectrum incident.

The government's sadaejuui-like English policy has finally led to an incident. Amid thinking that English (is needed to) survive, which is prevalent throughout society, foreign English instructors who haven't even had their qualifications confirmed have penetrated hagwons and universities which has finally caused a problem.

On the 11th, netizens angered by remarks denigrating Korean middle school girl[s] leaked photos posted at 'English Spectrum (a foreign English instructor job site)' of an immoral party at a club in Hongdae.

As the qualification problem of foreign English instructors and problems with Korean English education rise to the surface due to this, we are now facing the second round of the problem.

Getting away from the fundamental problem, some attention-getting media reports, the party photos used by netizens and the comments by women in the photos that they'll bring lawsuits has heated up netizen public opinion.

On the 12th, netizens formed the netizen group 'Anti-English Spectrum.'  It hosts a movement to solve the the problems at the heart of this incident, which it judges to be the problems of government education policy and foreign English instructor qualifications and the corruption of entertainment culture in unversity areas. 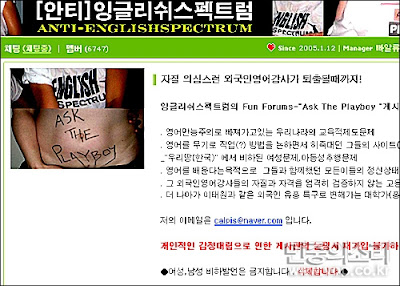 However, some media wrote articles with sensational titles such as 'middle school girls will do anything' or 'Yankee counter strike force.'  As well, a daily newspaper clouded the nature of the problem by interviewing the club and the women. These and other such media reports were for nothing but to arouse interest.
As well, as the netizen group denounced the women at the party and brought into question their sense of personal sexual morality, opinion was divided between men and women. But netizens held discussions through chatting every night and started finding clues to solve the essence of the problem.

The Government's sadaejuui-like English policy is also a cause

Related to this problem, Korean Teachers and Educational Workers' Union (KTU) spokesperson Han Man-jung said, "Because there is great demand for English education and many go abroad to study, the government hasn't even grasped the number of foreign English instructors in Korea and hasn't even established policies which can check their qualifications," revealing the problem which stem from the government's foreign language policy.

As well, spokesperson Han said that through US educational capital and capitalist pressure, citizens' preference for English has risen and suggested as an alternative that "research on the actual conditions of foreign English instructors is urgently needed and, centered around improving the government's foreign language policy and confirming whether foreign English instructors have teaching qualifications and whether they have completed a teaching training course, a qualification inspection system should be established."

Citing the media's reports on the Lee Seung-yeon scandal, Citizen's Coalition for Democratic Media assistant administrator Jo Yeong-su criticized some of the yellow journalism in the media: "Media which should propose a method to solve the problem [instead] move away from the heart of the problem and to attract the attention of consumers doesn't confirm the truth and write sensationalist and attention grabbing articles."

Currently at the internet site Daum, a petition titled 'Let's expel low quality foreign instructors' has 9000 signatures and 'Anti English Spectrum' is holding an offline meeting in Hongdae and discussing measures to solve the problem. 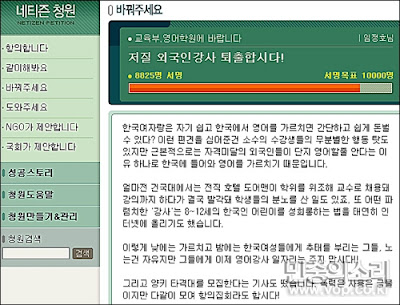 Upon reading at the end of the article that "'Anti English Spectrum' is holding an offline meeting in Hongdae and discussing measures to solve the problem,' I kind of feel like I'm watching the end of Birth of a Nation, where the Ku Klux Klan rides in to save the good citizens from scary black people.

Well, everything is in order, then.

Ignoring its incorrect assessment of how the incident started (netizens did not leak photos posted at 'English Spectrum" because of remarks "denigrating Korean middle school girls" discovered days later), the Voice of the People reporter states that "the netizen group 'Anti-English Spectrum'... hosts a movement to solve the the problems at the heart of this incident, which it judges to be the problems of government education policy and foreign English instructor qualifications and the corruption of entertainment culture in unversity areas," and you get the idea that the reporter agrees with this, especially when he waves away the "denounc[ing of] the women at the party" and the "question[ing of] their sense of personal sexual morality" to emphasize that netizens were holding "discussions through chatting every night and ... finding clues to solve the essence of the problem." One imagines the reporter either did not read or ignored this AES post which stated that the "essence of the problem" was the "low aspects of foreign instructors."

On top of this, it asserts that the newspapers which tried to publicize the points of view of the victimized women and the club owner were in fact "cloud[ing] the nature of the problem" and "were for nothing but to arouse interest." One wonders why the reporter thought those women's voices weren't important.

The "qualification inspection system" which the KTU spokesperson justifiably called for may have been eventually instituted to confirm whether foreign English instructors had degrees, but it also included drug and HIV tests to check foreign instructors' moral qualifications, which seem to have dealt with KTU complaints about the "structural problem" of foreign instructors' "free attitude towards sex" and "lack of a sense of responsibility" in 2006 (see here and here).

All in all, I'm not in the least surprised that Voice of the People cheered on Anti English Spectrum.
Posted by matt at 2:05 PM