"They branded us as whores, yanggongju and pimps," part 1

On January 17, Ohmynews interviewed many of the parties involved in the English Spectrum incident and published an initial, short article. On January 20, they published a much lengthier article, along with more of the original interviews. Here is the first part: 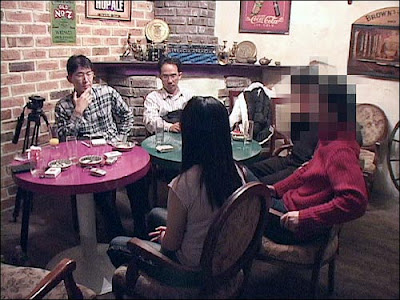 ▲On the afternoon of the 17th Ohmynews interviewed the victimized women and M Bar's owner
Last week's hot topic online, the so called "Foreign men and Korean women lewd party" controversy, has calmed down, but the women exposed in the problematic photos who suffered tremendous psychological damage due to the reckless reports which did not even confirm the facts about them are strongly fighting back. They are currently considering a lawsuit against some internet media outlets which spread the provocative photos.

Was is just the collective madness of netizens and sensationalized reports?

To determine the substance of the incident, Ohmynews on the 17th and 18th listened to the voices of the women and M Bar owner who claim to have been harmed by the exposure of the photos, as well as internet media like My Daily and Dalian and the Anti English Spectrum cafe manager, who the women have pointed to as having a large role in amplifying the controversy.

The women involved and the manager of M Bar protested, saying "There was no secret lewd party," and "Some online articles and the Anti-English Spectrum cafe branded us as whores, yanggongju, and pimps."

The women said, "Because of the media's sensationalized reporting and the netizen's collective madness we are suffering incredible mental anguish and there is also a person receiving psychiatric treatment." "The photos were spread indiscriminately without mosaics and our personal information was made public - we shouldn't have to suffer any more violation of our human rights."

In particular, they pour blame on the irresponsible reports by some internet media outlets. They said "We complained to My Daily and Dalian asking why they reported without confirming the truth and they came back with 'Telling the truth now won't make it true,' and 'What good will such a thing do now?'" "They didn't comply with the basics as media in the least," they criticized.

However, My Daily, Dalian, and the manager of the Anti English Spectrum cafe took a different position.

The reporter responsible from My Daily rebutted by saying , "The complaint telephone call was not about the content of my article." "My saying 'Well, if we tell the truth now, it won't make it true' was in regard to other media." A person from the editorial department of Dalian also said, "We blacked out the eyes of the people concerned in the pictures to protect them." "We didn't think we had to go so far as to use a mosaic."

The Anti English Spectrum cafe manager rebutted by saying, "That they became victims through the photos being leaked was contrary to our intentions." "Our purpose is not to be 'anti M Bar' but 'anti-English Spectrum.'" "Other sites also posted many of the related photos, but only our bulletin board did not find it appropriate to make this into an issue, and even if pictures or writing that netizens post is a problem, it's not my responsibility."

Interviews with the parties involved follow. The interviews were conducted via personal visits or over the phone.

These interviews will follow in part 2. It's interesting to see Anti-English Spectrum so clearly linked to the insults directed at the women ("Some online articles and the Anti-English Spectrum cafe branded us as whores, yanggongju, and pimps"). To recap, yanggongju means 'western princess,' a derogatory term for prostitutes who served US soldiers or women who married them. Here is Katherine Moon's description of attitudes towards them, from page three of Sex among Allies:

The vast majority of these women have experienced in common the pain of contempt and stigma from mainstream Korean society. These women have been and are treated as trash, “the lowest of the low,” in a Korean society characterized as by classist (family/educational status-oriented) distinctions and discrimination. The fact that they have mingled flesh and blood with foreigners (yangnom) in a society that has been racially and culturally homogenous for thousands of years makes them pariahs and a disgrace to themselves and their people, Korean by birth but no longer in body and spirit. Neo-Confucian moralism regarding women’s chastity and strong racialist conscience among Koreans have branded these women as doubly "impure."

As I've already noted, the netizens who formed Anti English Spectrum and who wanted to set up a 'Yankee counter strike force' in some cases clearly equated the foreign teachers with U.S. soldiers; the description of the women seen with the foreign teachers as Yanggongju makes this equation that much clearer. Also worth noting is that, in the following months, some articles (such as this one and this one) would paint Hongdae as being akin to a USFK camptown, much as this article did for Itaewon 20 years earlier.
Posted by matt at 1:51 PM