On January 24, 2005, Media Today reported on the top 5 search terms at Daum for the week of January 11 to 17. Titled '"It looks just like a person..." Human Fish in first place,' it presents this list and the following description of the background behind the third most popular search term: 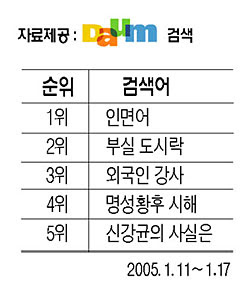 Along with this, a recently spread 'how to sexually harass students' [post] also caused outrage.

In the process, an internet media site with claims to 'healthy conservatism' exhibited reporting behavior which included publishing, like a 'pictorial project,' photos of American men and Korean women which hinted at or seemed like sex acts and a picture of a woman with her underwear exposed, while under the pretext of 'criticism' and 'accusation' sensationally kept reporting on the netizens who hurled colorful insults and criticism at the Korean women, and included even the element of human rights violations.

Needless to say, that 'foreign instructor' was in third place that week at Daum would suggest that the debacle had caught the attention of a lot of people. As for the summary, on the one hand, it's hard not to think "so much for the headlines saying 'It wasn't a secret party'" (and it certainly wasn't English teachers who spread that post), but on the other hand, that summary really does criticize the internet media who were involved, and while I'm not sure which one had "claims to 'healthy conservatism,'" I can only imagine it's Dalian (or perhaps My Daily) which is being criticized.
Posted by matt at 1:01 PM