Itaewon in 1984: An unfamiliar foreign zone within Seoul

Prelude 3: 10,000 illegal sojourners or immigration cheaters... the days and nights of Itaewon

On July 23, 1984, the Kyunghyang Sinmun published this lengthy report about Itaewon:

10,000 illegal sojourners or immigration cheaters... the days and nights of Itaewon

Seoul is a paradise for foreign gypsies.
A 'livelihood' from teaching conversation to housewives and university coeds
20 international marriages a month
70% divorce on the way to their home country
"There are lots of young women who follow them and spend their money on them"
Enter on a tourist visa and continue to stay...there are also crimes like theft and fraud 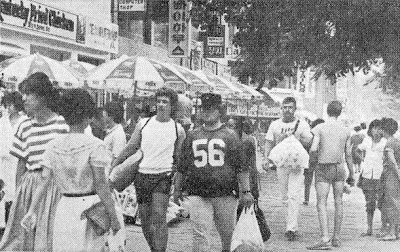 Seoul’s foreigner village, Itaewon, frequented by races from 59 countries, where a flourishing international shopping area coexists with the vanity of women in their 20s who go astray. (The photo is not related to the article.) Taken the afternoon of July 21 in Itaewon.

If you turn left from Banpo Negeori, where the statue of General Coulter used to stand, you could suddenly find yourself believing that you were in the downtown of some western city in America. On both sides of the street stand shop after shop, all with English signs, where a white women in shorts speaking English bargains with a Korean clerk in a clothing store. As well, a large black man passes by walking arm in arm with a slim figured Korean woman who looks like a university student.

To be exact, the streets between Yongsan-gu Itaewon1Dong 127 beonji and 136 beonji make up a 'foreign country zone in Seoul' and an 'Ethnic exhibition within Korea,' where foreigners living in Korea gather.

It is a place where street vendors who shout, "Good Price (Cheap)," a shopping area more advanced than Myeong-dong, and clubs and bars for foreigners' "nighlife" coexist.

Itaewon began to prosper as the foreign village of today in 1971, when the US 8th Army 121st Evacuation Hospital moved to the 8th army barracks. After that, around 10,000 civilians, DOD civilians, and hospital employees moved to the area and were followed by merchants, and the shopping area began to develop. In the mid 1970s luxurious houses reserved for foreigners and also high class houses were built at the foot of Namsan above Itaewon-ro (street).

The Itaewon area is divided into four zones: the foreign zone shopping area surrounding Itaewon-ro, the so-called "Texas Street" area above the fire station, named for its adult entertainment district and camptown (기지촌) with prostitutes (위안부) for foreigners, Bo'gwang-dong, where the houses of Korean working class people (서민) and the Crown Hotel are found, and the area with luxurious foreign houses above Itaewon-ro.

Along the 1.5 km long stretch from Banpo intersection to Hannam-dong are around a thousand stores with English signs crowded together. The Itaewon shopping area has become an attraction for famous people who always come to the area when visiting Korea.

Last year when President Reagan visited Korea he sent an attendant to U.S. Kim Tailor to have two suits made, and Secretary of State Shultz personally visited the area to shop three times. Tax authorities estimate that sales in the area total more than 50 million dollars a year (40 billion won).

The number of foreign residents that could be identified in the area by the authorities at the end of June were 7,110 people from 59 different countries.

There are 210 households in the the Namsan Oe-in Apartments, 50 in the Namsan Oe-in Jutaek, 50 in the Itaewon-dong Oe-in Jutaek, 50 in the UN Villa, and 118 in the Hilltop Apartments, as well as those checked into the New Yongsan, Hamilton or Crown Hotels or paying cheap monthly rent in Itaewon-dong or Bogwang-dong. By nationality, 60% were American, 20% were Japanese, and 10% were Chinese, with other nationalities making up the other 10%.

Japanese and Chinese, however, do not usually set foot in the Itaewon shopping area. Residents say this is because of a "White complex" towards white people.

However, of the 7,110 people, legal sojourners holding resident visas such as resident foreigners, company employees, and USFK family members from 29 countries have been identified.

Separate from these are also an estimated 10,000 foreigners who have overstayed their tourist visa period or are living as illegal immigrants. Foreigners who are long term sojourners on tourist visas game the system by going to Japan for a day or two when their 60 day visa stay is up and returning, extending their stay for another 60 days. There are also many illegal sojourners whose visas expire and who live unconditionally [in Korea].

Foreigners like these who are not formal residents are called 'vagabonds/itinerants [뜨내기]' or 'gypsies' in Itaewon.

Why do they linger around the Itaewon area and not leave Korea? "There is no other place like Korea where foreigners are treated so well," answered a foreign vagabond.

In 1977 Thomas (29) finished his service in the US Eight Army and returned home to Illinois where, he said, "There was no work and nothing going on, so I returned to Korea to live."

"Having English and some Korean, there is no difficulty making a living." He can make a million won a month teaching private English conversation classes to housewives. Also, in his area, he hinted that, "I also have friends who date and teach English to Korean girlfriends who have lots of money, and they get adequate pocket money." "It's not just foreigners' prostitutes, now it's female university students or teenagers from good families who chase after foreigners and spend money on them, and when I see it I think it's pathetic," said Hong Gwan-pyo, who has sold souvenirs in the area for 8 years, with a sour look on his face.

There are many cases where, because American soldiers or vagabond foreigners have been approached out of curiosity or a vague longing by young women, they have enjoyed themselves without spending a cent. Miss Gang (24), a prostitute who serves foreigners, complained that, "Because of these kids who spend their own money and chase after them, the money we receive for sex is only 10-20 dollars, the same as it would have been 10 years ago."

There are even teenage girls

From January to June this year, the Seoul Yongsan Police station dealt with 322 crimes by foreigners. Among them, 80% or 238 involved traffic accidents or assaults, while the other 20% involved theft or fraud.

The police station or local police box deal with one or two incidents of assault by foreigners in Itaewon's Texas alley every day. The cause of most assaults are trifling incidents like when disputes arise over treading on another's foot while dancing, and the inability to understand each other turns into a fist fight.

As well, among foreign vagabond criminals there are shameless crimes like taking money from women in their 20s on the pretext of international marriage. There are sometimes violent incidents by uneducated blacks such as the rape of women as well.

The night in Itaewon increasingly exudes an exotic atmosphere and changes into an entertainment area. Within a 500 m radius of the fire station are night streets where prostitutes for foreigners engage in pleasure activities like in the camp towns of Suwon or Pyeongtaek. So-called business girls, 'enjoyment tribes' of women and teenage girls, soldiers who have emerged [from their bases] and foreign vagabonds engage in revelry there.

It's 9pm on the 21st in a club on the so-called Texas Street. In a club which has a sign which clearly says 'foreigners only,' about 30 [Korean] women in their 20s shake their bodies to the constant disco music.

Women who pay no heed to the [sign] restricting entry for Koreans enter and are not stopped at all - only Korean men are stopped. Because it's early evening, there are almost no foreigners on the stage, and only Korean women dance excitedly while foreigners just watch.

At the club, Ms Yun (21, D University 3rd year), who was drinking beer with a friend, said, "When you come to Itaewon, it feels like the sense of freedom you'd get going to a foreign country." Ms Park, who greets the weekend in the Suwon camp town and is visiting Itaewon, said, "Americans are good because they're kind to girls." "My wish is to meet a nice person and have an international marriage and go to America."

However marriage to a foreigner like Ms. Park dreams of does not only have a happy ending.

International marriage agency South America Moving Corporation [?남미이주공사] spokesperson Han Hyung-sik (46) said "On average I carry out marriage procedures for about 20 international couples a month, but more than 70% return to divorce. Wearing a bitter expression, he also said, "When you see the unbearable sight of girls who come from university who fall only for the the appearance of white people who seem to be imbued with 'ladies first' kindness and then marry badly, even one's sense of national pride is ruined."

Through Itaewon's 'dollar box' shopping area's prosperity and after dark merry making, as well as the mix of different emotions like vague longing or disillusionment one feels towards foreigners, [it's reputation] as an unfamiliar foreign zone within Seoul solidifies.

So, Itaewon is an "ethnic exhibition," foreigners commit crime and live in Korea illegally, girls following foreign vagabonds around is "pathetic," marriage with them for their appearance leaves "one's sense of national pride [...] ruined," and, of course, "uneducated blacks" rape women. Good to know. Note also that one can make a million won from teaching English, and "date and teach English to Korean girlfriends." With that (and this article as well), the the foundation has been laid for the reaction to the Le Monde article which led to 'French foreign language teacher scandal of 1984.'
Posted by matt at 11:24 AM

Great story - and a reminder of how little the media has changed in 27 years...

Or a reminder of how little the media stories foreigners choose to highlight have changed in twenty-seven years.

Back in the mid-1980s, weren't a whole heck of a lot of stories of, say, foreigners' human rights, for example.

The 1980s saw a lot of handwringing about native speakers of foreign languages blowing in and making what were then upper middle-class wages for (what was perceived to be) little time and effort compared to most folks.

Along the way, there was a lot of press over military folks and their family violating SOFA to teach English, then a major kyopo backlash, and lately it swings back to English teachers in general making the same money as Koreans who have to put in far more time and energy to get positions that pay about the same.

Through it all, there are loads of similar stories from the patriarchal press talking about Koreans running down the economy with their kawasobi (a major topic of the 1990s) and erosion of work ethic, teenagers losing respect for the teachers and other elders, young people who don't appreciate their elders (especially their teachers), and South Korean housewives putting the economy at risk with their rampant stock and real estate speculation.

Focus on foreigners has always been, at most, a mere side note and never the main event, K-blogosphere attention notwithstanding.

For a population in 1984 whereby the vast majority of males were legally forbidden from foreign travel, Itaewon was a curiosity that provided a glimpse into the international sphere at a time when the country was gearing up for the Olympics. Most press in the lead-up to the 팔팔올림픽 was quite positive about the exchange that was about to come and upbeat about putting on a good face.

So 위안부 was used well into the 1970s with the meaning of 'prostitute' when used in conjunction with camptown (기지촌). Much closer to the end of WW2 people still had an institutional memory of what it meant to be a 위안부.