A week or so ago North Korean television broadcast an hour long program about Kim Jong-un, which can be seen here and which is analyzed in detail here. 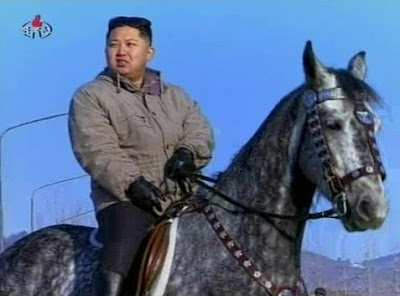 Love that photo. As B.R. Myers has pointed out, the template of the leader riding a white horse (the one above is not so white, is it?), which both Kim Jong-il and Kim Il-sung did, comes from Emperor Hirohito. Speaking of Myers, he has a piece in the New York Times about the Kim succession.

And speaking of North Korean television, you can (apparently) watch 조선중앙방송 (KCTV) from 5 PM to around 11 PM KST on a live stream that comes through the South Korean broadcast station SPTV, and also through Korea Web which allows 64 bit systems to access it.

This link to the Rodong Sinmun was apparently new, as it worked for a few days before the good people upholding the national security law finally blocked it.

As well, SinoNK.com has released "China and the North Korean Succession," a compilation of open-source Chinese language materials translated and edited by Adam Cathcart which give insight into the Sino-North Korean relationship during the eight days following the announcement of Kim Jong-Il’s death.
Posted by matt at 3:37 PM

Thanks for all the great posts you put up. Also, thanks for tipping me off to http://sinonk.com/ - so much quality content! Keep the posts coming!