On January 3, the Joongang Daily published an article titled "Seoul’s English teachers shocked at getting axe." It then goes on to look at a high school teacher, which is a little odd, since it's been known for well over two months that those cuts were coming.


The teachers are disappointed. They said they believed in the Lee Myung-bak administration’s policy of improving Korean students’ English, started in 2009, which was also supposed to diminish the gap between rich and poor students by giving good English education in public schools, especially in the capital.

“I heard that the government was continuing to expand the number of foreign English teachers coming here,” Morris said. “But now they want us gone.”

As the graph below reveals, almost 2000 NSETs were hired in public schools in 2006 and 2007; the drive to put more native speakers into classrooms began before Lee Myung-bak even came into office. 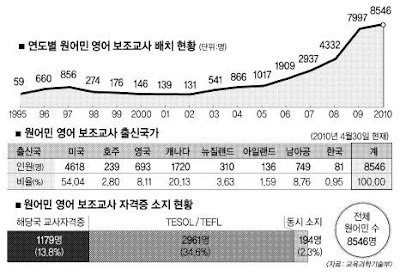 Starting from August 2009, the government hired 2,996 foreign English teachers in elementary, middle and high schools across the country, and the total number reached 6,255 as of last February.

That figure is quite different from the statistics above (though perhaps it doesn't include teachers not hired by city or provincial offices of education).


But last November, the Seoul Metropolitan Office of Education, which is controlled by rival parties to the ruling Grand National Party, announced the results of a public survey on the city’s English education policy and changes to the policy based on the survey.

However, 62.4 percent of the parents and students said foreign English teachers are definitely needed.

Again with the survey (I'm working on a translation of SMOE's official summary of this survey, but at 13 pages it'll take some time). At least this article includes the last sentence above, though one wonders how the information above would look if it was printed first. By the way, the sentence "53.7 percent of the students said they preferred to learn English from Korean teachers" should describe those teachers as "fluent both in Korean and English." Also, SMOE did not "announce[...] changes to [English education] policy based on the survey" when the results of the survey were announced in November. In fact, here's Yonhap's summary at the time:


According to the results of the "Study analyzing the results of the Seoul English education strengthening policy and development plan" released by SMOE on the 27th, parents, students and teachers are satisfied with current native speaking teachers but the opinion came out that in the medium and long term Korean English teachers with English ability should be responsible for school English education.


As a result of the survey, the education office said it will “downsize the project to place native English teachers in high schools but focus on having them in lower grades.” It said that part of the budget used to hire the foreigners could be redeployed to give language training to Korean English teachers.

Actually, a Korean friend who is a high school English teacher told me the teacher training program for SMOE in Gapyeong (which involves) NSETs is also supposed to be cut, which is ridiculous - I haven't confirmed that though.


“The survey showed that more parents preferred Korean teachers who are fluent in both English and Korean over foreign English teachers,” said Kim Jong-wook, a member of the Seoul Metropolitan Council from the Democratic Unity Party.

According to Choi Chun-ok, a supervisor at Seoul Metropolitan Office of Education, the survey results showed that the “efficacy of foreign English teachers is not as high as the amount of money that gets allocated to the project.”

One wonders how many parents, if the survey was on music education, would chose 'JYP or Lee Soo-man" as "preferable teachers" if the option was offered. And I think that SMOE supervisor Choi meant to refer to the "efficacy of the foreign English teacher system" as not being high enough.


The teachers say the program hasn’t worked too well because the city hired native speakers without any qualifications.

“They took so many people who either did not major in English or who have had no teaching experience at all,” said Morris.

Yeah, God knows you can't teach English conversation without being able to describe the influence of "Waiting for Godot" on "Rosencrantz and Guildenstern Are Dead." Seriously though, why an English major? Why not a major in a foreign language? As for the lack of qualifications, according to the SMOE survey, of the NSETs it questioned, 15.5% had MAs and 64.3% had TESOL or TEFL certificates.

No it wasn't. This is referring to the statistics reported in the original SBS report on the cuts the Seoul Metropolitan Council hoped for; The actual cuts were not 4.9 billion won for middle and elementary school NSETs, but 2.2 billion won. Now, the original SBS report said that last year's budget of 34.6 million won for NSETs was to be cut by 9.3 billion won (4.4 SMOE planned to cut + 4.9 wanted by the council), or by 27% - and yet it reported that 57% of NSETs would be cut. Even better, I found the below SMOE document about the hiring of NSETs which reveals that over 25% of SMOE's NSETs in 2010 were not funded by SMOE, which makes the 57% figure even more ridiculous. According to the original plan, 27% of 75% of Seoul's foreign teachers would be cut, or about 20%. Again, perhaps what is needed is more math education...

The Joongang Daily story has a nice ending:


Some foreign teachers want to lash back at the government’s decision, but they’ve been warned not to.

“Numerous foreign English teachers in Seoul were considering holding protests or taking some form of collective action to express dissatisfaction with the new plan,” Chao said. “But an official from the education office told us that wasn’t a good idea. He said Koreans would only hate us even more.”

Rather blunt, if honest, talk from the "education office" (if true). Just imagining foreign teachers protesting job cuts makes me chuckle... I don't think a device exists that could measure how little sympathy such an action would garner from the public.
Posted by matt at 4:21 PM

FWIW, this seems to be isolated to Seoul for now.

I'm curious to see though if Daegu and Busan follow suit, but I'm thinking no. This was very much a political maneuver above all else due to the free lunch thing.

And as I mentioned before, someone needs to buy me a Cass when in a few years the Seoul mommies start to bitch about how the only way to learn English is to enroll in expensive hagwon.

Yeah, I really don't know what protest would accomplish. Supposing there were no cuts and all of the foreign public school teachers in Seoul went on strike, it's not like the daily operations at the various schools would be disrupted that much. Korean co-teachers would just show up late to classes that they have to teach themselves.