Canadian returns to Korea to confess to a murder

A bit late on this, but a Canadian who taught English in universities from 2001 to 2009 returned to Korea to confess that he'd murdered his ex-girlfriend, a university student, in 2009. He'd gotten away with it and made it look like accidental drowning, but he was wracked by guilt and returned to confess to her family and police. The fact that he said he did it because he thought she was going to kill him doesn't suggest the most stable of minds (but who knows what actually happened). Unsurprisingly, there were a lot of news reports on this (39 at last count), one of which is translated at Korea Beat. It's also been reported by the Korea Times, Korea Herald, and Chosun Ilbo.

I liked this scene in YTN's report: 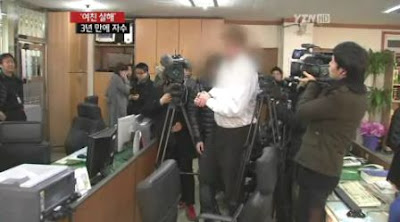 One wonders if there are actually any police officers in the room or if they are all journalists. It's one of the things that baffles me, the allowing of the press into police stations. Perhaps it's part and parcel of being a shame-based society. At any rate, you can hear him talking in that video.

I wonder who all the people are in the screenshot below (from an MBC report); he certainly towers over everyone. 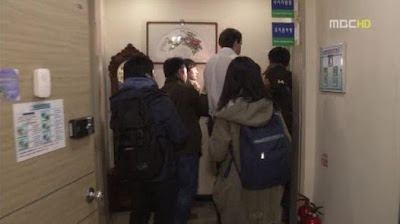 I've never come across any arrests of English teachers for murder in Korea (not counting Korean American gangsters who committed crimes in the US or Canada), and while it wouldn't surprise me if this was used as fodder for more "there is yet another loophole in the native speaking verification system" articles, I almost wonder if the interest here might be more in the fact that the man - a product of a guilt-based society - returned to Korea to confess the crime, rather than the crime itself.

For example, the article translated at Korea Beat has the following:

Netizens had various reactions to the news of the murder and the Canadian’s confession, such as “he must have been haunted by a Korean ghost even in Canada,” and “it’s lucky that the defendant was so full of sadness.”

Here are a few of the titles from the 39 articles. Most common is the title the Maeil Gyeongje used: "Canadian English instructor who murdered girlfriend gives self up after three years."

Chosun Ilbo: Canadian English instructor: "The ghost of my girlfriend who died three years ago has followed me around... I came to be punished."

Segye Ilbo: Canadian English instructor who murdered girlfriend but was found innocent gives self up after three years.

IB Times: Canadian who killed lover turns self in is "miserable"... 'Why' did he kill woman 14 years his junior?

Donga Ilbo: "The scene of my girlfriend's murder constantly replays in my mind..." Canadian voluntarily returns to Korea and turns self in after three years

less than a third of the articles mention "English teacher" or "native speaking teacher" in the title, so that angle is not being as played up as it could be.

I keep wondering when the Canadian press is going to pick this up.
Posted by matt at 10:33 AM

He is not my homeboy.

I really love reading your blog. It is always so accurate, sharp and fair that it makes me cringe (Korea being my second country). Keep writing, you fucking rock.