Jeju Weekly has a good story on the SMOE cuts and the fears that they may spread throughout the country and affect public school foreign teachers in Jeju. Here's what SMOE said in an interview:

“We will never stop hiring [native English-speaking teachers]. We have NO plan to make Korean English teachers replace them. We need to recruit hundreds of foreign teachers a year for the time being in spite of the budget cuts. But the number will be reduced,” Choi [Chun Ok, SMOE Foreign Education Department Chief] stressed in an email interview with The Weekly. Throughout the three-page response to our questions, this paragraph was the only one specifically written in English.

“Foreign English teachers have greatly contributed to the development of English education in Seoul. However, it is time to reevaluate the cost-effectiveness, considering a huge sum of budget (about 52 billion won, or US$45 million annually). So we are changing our policy from quantity expansion to quality improvement,” said Choi.

“So it is not a sudden decision or unprepared plan,” said Choi.

Interesting. When the cuts were first announced it was reported that SMOE planned for the end of native speaking teachers in high schools, but that the cut to middle [and elementary] school teachers was the Seoul Metropolitan Council's unexpected decision.

According to SMOE, the average monthly salary of a foreign English teacher is between 1.8 million to 3 million won a month, but when considering accommodation allowance, flight reimbursement, and contract completion bonuses it equals between 38 million to 48 million ($33,000 to $42,000) a year. For a native English-speaker with a teaching certificate but no experience, they earn about 43 million won ($37,000) a year (including accommodation allowance and other benefits), while a Korean with the same qualifications only costs SMOE 31 million won ($27,000) a year.

Further statements from SMOE representatives claim that there will be more openings for after-school English classes, and that what happened in Seoul "does not signify a nationwide trend." Other than Gyeonggi-do and Gangwon-do, I guess. Seeing as some provinces have only just reached peak numbers for NSETs such as Gyeongsangbuk-do, I doubt there will be large cuts there in the near future. Also worth remembering is that Gyeonggi-do was one of the first provinces to hire NSETs en masse, as this graph (I don't know where I found it) using figures from September 2006 - over five years ago - reveals: 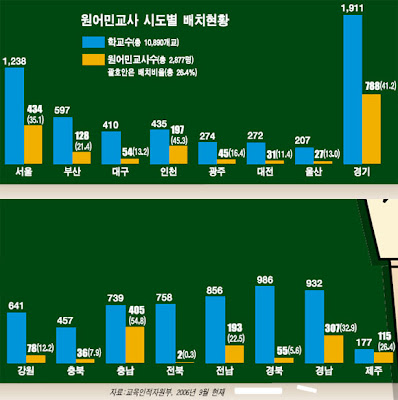 Gangwon, Chungbuk, Chungnam, Jeollabuk, Jeollanam, Gyeongbuk, Gyeongnam, Jeju
The blue bars show the number of schools in each province or city, the yellow bars show the number of NSETs in each province or city, and the figure in brackets is the NSET placement rate. At that time there were 2,877 NSETs in the public school system out of 10,890 schools, making for a 26.4% placement rate. As can be seen Gyeonggi-do had the largest number of NSETs (788) in 2006, and the second highest placement rate (behind Chungcheongnam-do). So perhaps it's not surprising to have seen cuts in Gyeonggi-do first. That said, that bit of history isn't going to convince anyone that this isn't mostly about politics.

One person is quoted in the Jeju Ilbo article saying "This budget cut should not be exaggerated," but perhaps someone should have said that to SBS, who broke the story in December, when they started their report with the caption "Native speaking teachers are disappearing."
Posted by matt at 1:23 PM