An early article about migrant workers in Korea

On September 23, 1989, the Korea Times, with great subtlety and grace, reported on an emerging social problem: 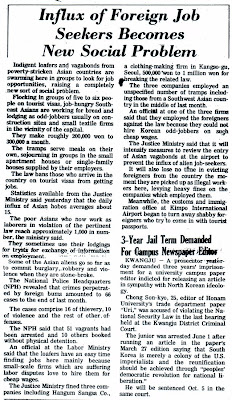 It may be difficult to discern, but I think a close reading of the article may turn up a bit of disgust at the 'hobos,' 'bums,' 'vagrants,' and 'loafers' infesting the country, and gives some idea of how migrant workers would be treated in the future. Actually, once the Industrial Trainee System (ITS) systematized their entry into the country two years later, it could be said that things got worse for them, since they were forced to pay outrageous recruiting fees to come to Korea, and then had their wages controlled and kept low (with forced 'saving plan' deductions making them even lower), while being considered 'trainees' (and so not subject to labor law protections) and only allowed to stay for two years, which was not enough time to pay back the loans back home they took out to pay the recruiting fees in the first place. That system - and the fact that working illegally could pay twice as much for the same work - essentially mass-produced a colony of illegal foreign workers, who amounted to 80% of Korea's 350,000 migrant workers in 2003. On the other hand, since the ITS did allow them to enter the country in (eventually) sizable numbers, it at least meant that not every south or southeast Asian seen on the street was considered to be illegal, as may well have been the case when the above article was written.

More of the development of the ITS can be found here.
Posted by matt at 3:10 PM

A very interesting article and the choice of words!

During my interviews (for an on- going PhD) - MTU's President Mr. Catuira told me that they are treated as dogs. Conditions of these workers are appalling and real change is much slower than what it should have been.

Students in Korea (esp. the foreign students) do NOT want to touch the issues related to migrant workers at an academic level - as it may lead to problems with professors, school administration and the immigration office.

It is important to note that according to 2011 statistics: 80% of the entire foreign population in Korea holds H-2(ethnic Koreans) and E-9 visas (migrant from 15 countries with whom Korea has signed an MoU)- doing the job shunned by the natives also called the 3D jobs. Second biggest group is the foreign wives whereas the third biggest group is the language instructors (E-2 visa).

During a language class at a graduate school, our professor claimed that: Ansan is one of the most dangerous neighborhoods with high crime rate (its is one of the biggest foreign enclaves in South Korea) & fingers were pointed at migrant workers. Itaewon and Haebongcheon also have a bad reputation though Itaewon has changed a lot over the past 10 years however, Seorae in Banpo is a chic enclave (with 200 French families living there). It is important to note that there are crimes committed by French people in Korea too. I do NOT want to go in the debate of 'good and evil' however, it is universal and it doesn't take a specific race, ethinicity etc. to commit crimes...but instead a crazy head...which can be that of anyone from anywhere.

Korea should address these issues and more research must be done. Migrant workers have come from economically poor countries nevertheless, it must be realized that almost all the foreigners in Korea are there for jobs and for earning money, paying off debts that they have accumulated and so on and so forth.

Migrants workers chose an important a7 difficult job - they work hard, they die in crackdowns, they are abused, they are sexually, physically and mentally harrassed almost every day. They tolerate it - because they want to break lose the chains of slavery back home, of non- existance of human rights back home and because they chose to work rather than to commit crimes in their own countries or in any other.

They need to be respected - for who they and for what they do.