On October 2 two articles went up on the Kukmin Ilbo's website (and later in the hard copy paper itself) with in a minute of each other. The first was titled "'Unregistered instructors' abound in hagwons as part-time workers.'

The article introduces Ms. Lee, a 23 year old 4th year student at a private university who works at a hagwon for 3 hours a day, 5 nights a week teaching math to elementary and middle school students after her university classes. She'd previously worked there marking tests and cleaning, but when the math teacher suddenly left in May, she, with an engineering related degree, became the replacement. Saying that most parents don't realize she's a university student, and that there's no need to prepare classes, it's noted that since she's not registered with the education office, she is an 'illegal instructor.'

It notes that incidents of part time workers turning into unqualified hagwon instructors are increasing. "Though the government passed an amendment strengthening the hagwon law on August 15, there are still many blind spots in regard to unregistered instructors and illegal private lessons."

It then quotes a hagwon owner who says that the part time teachers are cheaper and don't have to be paid insurance. As it turns out, according to the laws, it's not impossible (though it would be difficult) for a university student to teach legally, but parents do not want university students teaching their children.

According to the law, hagwons should submit information about their new teachers to local education offices, and the information about the teachers (such as their qualifications), as well as hagwon fees are posted publicly. As the Ministry of Education notes, however, "In reality, enforcement of this is difficult."

Note the lack of judgement. These instructors, and the hagwons that hire them, are not condemned for doing things against the law. There is no worry that these illegal instructors are, say, not being checked for a criminal background, or are a threat to their students.

This stands in contrast to the other article the Kukmin Ilbo published yesterday:

In August, Korean American Mr Kim (33), the operator of a language hagwon in Gangnam and former gang member wanted for first degree attempted murder, was caught by police. Mr. Kim was wanted for a 1997 attempted murder charge in the US, came to Korea and taught SAT, TOEIC and TOEFL.

Under a recently passed amendment to the hagwon law, when foreign instructors are hired, they must submit things like a criminal background check, a health check including marijuana and drug test results, and educational certificates. As well, the education superintendent will conduct training about Korean culture aimed at foreign teachers who have entered the country more than once. According to the Ministry of Education, Science and Technology there are currently 15000 hagwon native speaking instructors registered with city and provincial education offices.

The problem is the effectiveness of the law. This is because government's measure affects only native speaking instructors registered with city and provincial education offices. Even today, most native speaking instructors hired by large hagwons are instructors who received 'Conversation instruction (E2) visas' when they were hired. The E2 visa is for native speakers from 7 countries which use English as the native language such as the US, and even now in order to be issued the visa one must submit a health check which includes a marijuana test. If the hagwon law is introduced then the only difference is that a health check must be received once again.

The difference between these two articles is pretty clear. They harken back to the two articles about Korean "fake native speakers" last December, one of which looked at the "sorrows" of Koreans who pretend to native speaking gyopos in hagwons, which stand in contrast to how "fake" or "unqualified" foreign instructors are treated by the media. To paraphrase B.R. Myers, just as foreigners are inherently evil, while Koreans can only do evil, so it is that Koreans are uniquely virtuous, while foreigners can only do the occasional good deed. Additionally, when Koreans do wrong, it was a mistake, or they had no choice, and understanding is needed.

Unlike western, foreign instructors, small hagwon owners "can't help" but hire illegal, unregistered foreign instructors, who then perpetrate the most outrageous crimes against Koreans who are powerless to stop them due to blind spots in the system. That these 'blind spots' are caused by Koreans who hire these teachers is not worth looking into - like the Koreans convicted of war crimes after World War II who were absolved by a government commission, they had no choice.

An even more stellar example is an article by the Weekly Donga in May, 2010 which looked at the fate of David Nam, a second generation Korean American who shot and killed a "white man in his 70s" as a teen in 1996 and fled to Korea where he eventually worked as an English teacher in a hagwon for the better part of a decade before being arrested in 2008 and extradited to the US where he was found guilty and sentenced to life in prison. The title of the article? I kid you not: 'The "cruel fate" of the Philadelphia fugitive.' In it, it is suggested that the racism that Nam faced as a child from white children helped set him on the path that led him to "pull the trigger" (he didn't mean to kill the man, of course).

When Nam's arrest was reported on March 19, 2008, Yonhap quickly released a story titled "There is nothing to stop foreign criminals from fleeing to Korea," which ended with this:


With the private English education craze, there is an explosive increase in native speaking instructors, however a system to confirm their qualifications is not properly provided for, and as demand for native speaking instructors outstrips the supply, instances of people known to be unqualified being hired have occurred, so in fact there is a need to strengthen enforcement regarding this.

The Hankook Ilbo also published this cartoon the next day: 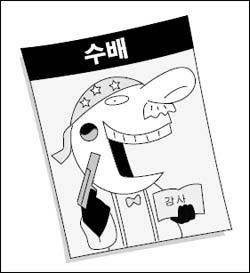 As it turned out, Nam had dual citizenship and was under no obligation to get an E-2 - or any - visa, though his arrest led to calls for strengthening the E-2 visa (which had just had a criminal record check, drug and HIV check added to it three months earlier).

Also, the Kukmin Ilbo article states that "Drugs and molestation by native speaking instructors in hagwons are never ending" without giving a single example. None is needed, I guess, since it's simply 'known' to be true, but it might be worth pointing out that of the three reported cases I could find of foreign hagwon instructors being investigated for molesting students, the last took place in April, 2008, or three and a half years ago - so these crimes are hardly 'never ending.'

It's nice to see recruiters Job and Consulting back in another 'news' article (number 6!) depicting western English teachers as potential criminals in order to drum up business for themselves. While 'unregistered' Korean instructors have been a problem reported on occasionally by the media for some time, this is the first time the term has been applied to foreign instructors. You'd think with the vast array of crimes and flaws foreign instructors are already accused of there'd be no need to come up with something new, but the media (and recruiting companies hitting them up for some publicity) are nothing if not inventive and relentless in this regard.

As for the amendment to the hagwon law, I haven't had a chance to look at it yet, but this summary says that


When hiring foreign instructors to work in hagwons, the law legislates that in addition to criminal record checks, health checks, and education certificates, that their passport, visa, and alien registration card also be confirmed.