The Constitutional Court rules on the Vandom case

It was over two years ago that the Constitutional Court agreed to accept Andrea Vandom's petition to find mandatory in-country HIV tests for non-Korean non-citizens on E-2 visas unconstitutional. For more background, see these articles:

Foreign Teacher Renews Visa With No Health Checks
A letter criticizing Vandom and her response to it.
Teachers to Go to Court Over Visa Rule
Prejudice or ineptitude? Let court decide
Teachers Fight Over Unfair Visa Rule
Infected, Detected, Rejected in South Korea
Victims of HIV-related Travel Restrictions in Korea

Two days ago the court gave its decision - the petition was rejected. It should be pointed out, though, that "the Court has not ruled the tests are "constitutional" - it has rejected the petition."

A summary of the decision can be found here (in Korean).

Hopefully I can post a translation before too long, but for now, Benjamin Wagner's comments on the decision are worth reading:

At 2PM on Thursday the Court rejected Andrea Vandom's petition because in the Court’s opinion the immigration office didn’t force Andrea Vandom to do the HIV and drug tests "required" by the E-2 visa, they just requested her to do the tests. The Court said that just asking for the tests isn’t enough to constitute an action by the government that would violate the rights of a foreigner in Korea.

We had hoped the Court would decide the constitutionality of a rule that required foreigners to be tested for AIDS and drugs merely because they were foreigners and give us a clear ruling that such a practice is discriminatory under the Korean Constitution. We didn't get that but there is much that is positive about this case. First, the Court has NOT said that it is constitutional to conduct mandatory in-country HIV and drug tests on foreigners. Second, the Court’s decision cast a great deal of doubt on whether the tests are mandatory. The government's argument was that it had merely asked for Vandom's HIV status and it made no attempt to argue that mandatory rules were in place to force her (i.e., deportation, visa cancellation) to comply. If someone were to refuse a blood test and argue that a self-declaration of HIV status was all that was required, this case would offer support for that position.

In its decision the Court focused on regulations promulgated on April 3, 2009, which the immigration office calls a "self-health statement" or a "self medical check" (this link downloads a .hwp copy). The questionnaire looks like this (note that the "self" part is only in the Korean version, marked yellow): 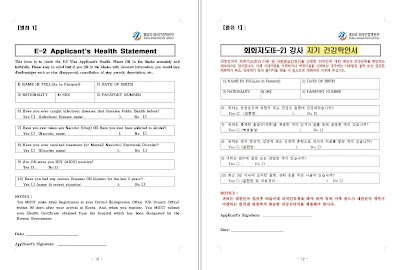 The Court looked at questions 7 and 9, which ask:

7) Have you taken any Narcotic (Drug) or have you ever been addicted to alcohol in the last 5 years?

So for E-2 visa holders who have taken AIDS tests, and repeat AIDS tests – some 80,000 of them over the past four years – the immigration office says (in this case at least) they were just asking for them, not requiring them.

I discussed this so-called "self-health check" in Feb. 2009 and mentioned how it disingenuously tried to pass off the tests as voluntary measures, pointing out "it appears to be a 'self-check' until you get to the bottom of the page," which reads:

"You MUST make Alien Registration at you District Immigration Office (OR Branch Office) within 90 days after your arrival in Korea. And when you register. You MUST submit your Health Certificate from the hospital which has been designated by the Korean government."

While examining the questionnaire, the Court, for whatever reason, does not take this binding language ("You MUST submit...") into consideration. And perhaps, according to the Court's opinion, this statement should be interpreted as a mere request since the Court's opinion indicates that it's not clear whether the government would take any action if an E-2 holder refused to comply with a hospital exam and just submitted a self-declaration.

Nevertheless, before anyone makes the decision to refuse the hospital tests they should be aware that (in 2009 at least) the immigration office has said the following:

※Those that list history of drug usage, AIDS, or other disease the law defines as serious contagious disease in their self health verification are not allowed to be issued a visa issuance certificate

※Those that are found to have drug intake, AIDS or other disease the law defines as serious contagious disease in their health examination will have their stay cancelled and be deported.”

(This dire warning, to my knowledge, is no longer posted on the immigration’s website. I mentioned this in the NHRCK report (p. 8, FN 27) and there’s copy of it here.)

In 2010 the immigration office stated that persons with HIV will not be rejected for E-2 visas, will not have visa status canceled and "will not be forced to leave Korea." If this is indeed the case then a self-declaration should suffice.

Yet, keep in mind that Andrea Vandom, who made it known that she was not HIV positive, was threatened with deportation by the immigration authorities on numerous occasions for refusing to provide hospital test results – including this threat in the press:

"After the incident, the immigration office said the approval was a mistake by an official and that it would ask her to submit the necessary documents. The office added that it would deport her if she didn't heed the request."

The Court did not take these deportation threats into consideration, however, and focused on the so-called "self health check" document.

* * *
I'll conclude with a thought provoking statement from the case that Judge Kim Jong Dae gave in a separate (concurring) opinion. Judge Kim stated that

While the Constitution does indeed use the word "national/citizen" [kukmin] when referring to all fundamental rights, there are several Korean Constitutional Court decisions asserting that foreigners in the territory (and in one case outside of the territory) are in fact entitled to fundamental human rights under the Korean Constitution. Not to mention the repeat declarations by the Republic of Korea (“ROK”) to the international community, which state:

“The principle of respect for human rights and the principle of equality of individuals before the law, as enshrined in the [ROK] Constitution, also apply to foreigners.”

Judge Kim's opinion on foreigners' rights under the constitution is disappointing, but his validation that foreigners' rights are indeed guaranteed by international law and treaties (which is clearly stated in Art. 6(2) of the Korean Constitution) is very positive. However one wonders why this Court didn't go ahead and apply them in this case. If it had, it would have given us a clear ruling that requiring foreigners to submit to HIV tests which are "just intended to assure the parents" is a stigmatizing and discriminatory practice that is forbidden by international law and treaties.

In January 2010 the ROK announced to the world that it was abandoning HIV restrictions on foreigners and was congratulated for it by the UN [link]. In March of the same year, before the Human Rights Council, the ROK said that “early this year as part of the effort to eliminate all forms of discrimination” the ROK had revised restrictions on “foreigners living with HIV in compliance with UN recommendations.” [link to video]

This case should be seen as progress toward confirmation that HIV tests for foreigners on E-2 visas are voluntary. The Korean immigration office should make it clear that those who intend on treating them as such will suffer no adverse consequences.

I've been here 15 years. Things HAVE changed. Many of the rights foreigners now have didn't exist back then. Count yourself lucky things have changed in the way they did. Changes in the future are inevitable, just not on a timetable to our liking.

Things most certainly have changed, as Darth Babaganoosh states. Interestingly, the griping and grousing and whining of kvetchpats goes up with inverse proportionality to problems disappearing.