45 years of calling for revisions to the SOFA

This year there have been a handful of articles portraying Itaewon as dangerous and complaining about the 'shocking' behavior of foreigners there since the curfew for US soldiers was lifted last year. Now that a new curfew has been put in place, Itaewon is being portrayed as a place of peace and calm.

This is quite reminiscent of what happened in Hongdae in January 2007, when YTN broadcast a report on the outrageous behavior of foreigners, especially GIs, which was turning Hongdae into a "lawless zone." Shortly thereafter, USFK command banned U.S. soldiers from Hongdae, and YTN celebrated with a report which stated that, "Since U.S. soldiers stopped going to Hongdae, peace has returned to the area."

Despite there being SOFA in place, if the media place enough pressure, the US has shown that it will place bans, or, most recently, re-instate the curfew, which is wanted mostly for symbolic reasons than for any practical reason. The idea here is to assert sovereignty over the soldiers in an indirect way.

Well worth reading is Gi-wook Shin's paper, "The Media and the U.S.-ROK Alliance:
The South Korean Case," which can be found here. As he notes,

Observers of Korean affairs note that the Korean media have contributed to the rise of the South Korean public’s adversarial attitude toward the U.S. and its changing perceptions of the alliance with the United States.[...]

The concessions referred to here are apologies for the 2002 accident and a ban on beef more than 30 months old in 2008.

Oddly enough, a group claiming responsibility for contributing to the 2007 Hongdae ban was Anti-English Spectrum:

2007.01
Personally went on location to shoot a report on the problems with Hongdae Club Day, the gathering place of low-quality foreigner English teachers, for the purpose of broadcasts and press exposure. Breaknews, YTN broadcast the report numerous times by the hour. A barrage of civil petitions were sent to Mapo Police Station, and after the news broadcast, the police announced that it would implement a crackdown.[YTN: "Hongdae, Foreigner 'Lawless Zone'" - links: English Korean]

What's interesting is that though the SOFA may shield soldiers from Korean law - or at least that's how the Korean media describe it - the fact that they are subject to military command means that, through media pressure, soldiers' free time can be controlled to some degree through blanket curfews or bans. This is not the case with foreign teachers, hence AES's call for "continuous monitoring" of foreign teachers.

At any rate, with more calls to revise the SOFA in the air, it might be worth mentioning how it was first negotiated: 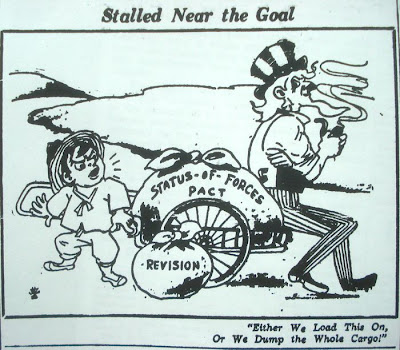 Yes, indeed - after the draft was released to the public, the media decried the fact that the Philippines had a "better" SOFA, and calls were made to revise the treaty. So Koreans have been calling for revisions to the SOFA since before it was even ratified.

Calls for the SOFA to be revised after it was ratified first occurred after 'Anti-American Hatefest '88', otherwise known as the XXIV Summer Olympics, but that's a story for another day.
Posted by matt at 11:05 AM