Second half of Incheon Airport Subway to open December 29

Or most of it, anyways: 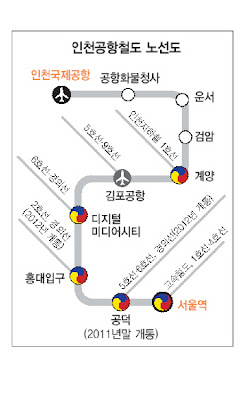 According to that map, the stations at Hongdae and Gongdeok won't be open until 2012 and the end of 2011, respectively. According to the Hankyoreh,

Travel between Seoul Station and Incheon International Airport will become faster and more convenient, as the Phase 2 section (20.4-kilometer section linking Seoul Station to Gimpo Airport) of the Korail Airport Railroad opens on Dec. 29. This construction follows the Phase 1 section (37.6-kilometer section linking Gimpo and Incheon airports) that opened previously. It has been almost 10 years since the project started in April 2001.

Travelers can also check in luggage at Seoul Station before leaving for the airport, the Ministry of Land, Transport and Maritime Affairs said Wednesday. They will pay 5,300 Won ($5) for regular trains traveling from Seoul Station to Incheon Airport in 53 minutes, and 13,300 Won ($12) for express trains in 43 minutes.

They just switched over the signs at Gimpo Airport station the other day. Previously the two levels of the station had the express train to Incheon Airport at level B4, and the all-stop train at level B-3, but now the latter level has signs reading "To Seoul Station," with both the express and regular trains leaving from level B4 (the north side of the station is the platform for line 9). I read somewhere (I can't find it now [update: Wikipedia says this]) that when the Seoul Station portion is complete, some trains from Incheon Airport will shift tracks and take Line 9's route to Gangnam.

The construction taking place in the Magok-dong fields (which I've written about before) has been pretty much completed for some time now (though up until a month ago part of the tunnel appeared to still be uncovered), and trains have been doing test runs for a few months now as well. It's disappointing that the connection to line 2 at Hongdae won't be finished for another year or so, but I can't complain about a subway option that can get me from Gimpo Airport to Seoul Station in 20 minutes.

This is way cool for me. My place is just up the hill from Seoul Station, which means a much easier (and more reliable) ride on the train. The Airport Bus, while cheap, was a bit of a crap shoot, schedule-wise.

And being able to check my bags in at the station? Sweet!

Thanks for pointing this out, Matt. When I'm in Seoul, I'm really good about keeping up with these things, but I might have missed this had you not printed it up. And then I probably would have still caught the bus back into town, unaware of the train beneath my feet.

I have taken the train from Inchon International to Kimpo, and even met one of the foreign engineers overseeing part of it. He was quite proud of the job they were doing. I look forward to riding it all the way in.

Nine years seems like a long time (and it is) but in Southern California it takes about eight years just to decide where to put the new lines. Here in Honolulu they've been charging us a half-percent sales tax for our future rail system — for four years now! Even though nothing... NOTHING... has been started on it.

Hey Matt, that is great news to finally hear the 'Grand Open' date.

You never know, I might even make it over to Korea to catch the second opening day.I was there when the first half opened.

(My blog still gets a small number of hits from people searching for AREX.)

"KTX will be connected to Incheon International Airport in 2012."

This is good news. I often pass the bridge for the airport railroad while cycling at the Han River, and I wasn't sure how much longer it would be under construction.

I was at Hongdae Station the other day and construction on the connection has started. This being Korea, it's probably going to materialize very quickly. Also I noticed on at least one subway map that the airport line appeared

I've taken the airport line a couple of times. It doesn't seem to be very heavily used...even I prefer the buses to the airport. But I'm sure things are going to change once people can catch it from Seoul Station instead of having to ride line 5 or 9 out to the boonies.

Jon:
I've thought of you as I've watched some of the construction going on. The bridge was finished when I got back to Korea in January, and trains have been running on it for a few months (I saw one crossing the bridge for the first time the other day). Be nice to see how it looks at the other end at Seoul Station. I also managed to get out to the site in Magok-dong (where I shot this video in summer 2009 of the Line 9 part of Magongnaru station) the other day - since they finished construction and filled in the trenches, the security out there has disappeared. I'll post some photos before too long.

Andrew:
I didn't know the KTX was to be extended out there... interesting.

Marc Hogi:
I'm out in the boonies, so I've used the airport railroad a few times. The connection to Seoul Station in 20 minutes will certainly make it less 'boonie-ish'.