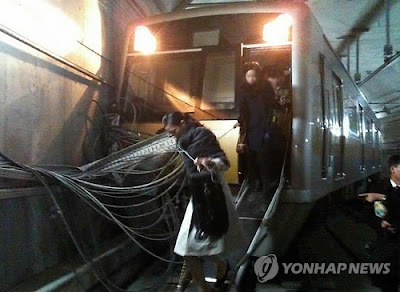 According to Yonhap, at 8:10 last night, train 0913 on Line 9 derailed as it headed towards Sapyeong station (in the direction of Shin Nonhyeon Station). Luckily, it was going under 20km per hour when it happened, so there were apparently (according to Metro 9 officials) no injuries. As can be seen above, passengers exited out the front of the train. SBS has a video here which the following photos are taken from (YTN also has video, and according to YTN it took only 8 hours to restore service). That's quite the spacious tunnel. I've taken photos before out the front of the train as it's moving and thought that it might be fun to walk around the tunnels - but a derailment would not be my first choice in getting such an opportunity. 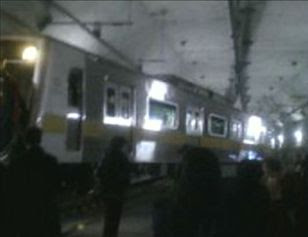 It's also not exactly comforting that it happened on Line 9, considering I take it every day.
Posted by matt at 12:47 PM

Weird how this is the only place I've seen it reported in English. Glad there were no injuries, although it did force the Lady in Red and I to detour via bus. The line 9 train we were on stopped at Dongjak station; a bunch of announcements came on, and everyone exited the train. The train then proceeded to go the OPPOSITE direction (WTF?), and several dozen people stood around for the next train. When we were told the trains weren't going to Sinnonhyeon station, we went up top and caught a bus.

They let Kelly drive it? She's the only person I know with derailment experience.