The government released some new reading material the other day:

South Korea’s latest weapon in the fight against Kim Jong Il’s regime is a 32-page manga comic strip that seeks to dispel public doubts about North Korea’s responsibility in the deadly sinking of a patrol boat.

The Ministry of National Defense yesterday began distributing the cartoon story to schools, libraries and government offices in a bid to turn back a wave of skepticism among the nation’s youth. More than half of South Koreans in their 20s don’t trust their government’s latest account of the March 26 sinking of the Cheonan, according to a poll by Seoul- based research company Realmeter. 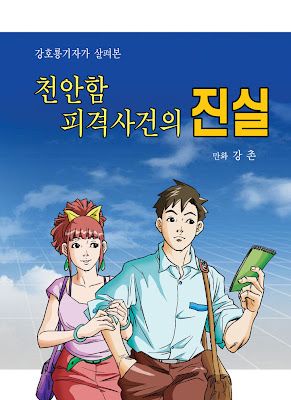 The Truth about the Attack on the Cheonan
The comic can be read online here. Whether this will help communicate the government's position or simply be perceived as propaganda remains to be seen.
Posted by matt at 10:57 PM

In a private email exchange, some other bloggers and I were discussing this comic, with one suggesting this was a typical FAIL idea of a right-wing administration (I'm paraphrasing and adding color).

I wondered, though, and I guess you might be one who knows the answer... weren't comics used for political informatizing during the Kim Daejung and/or Roh Moohyun administrations? It seems to me I saw some, but I recall neither the contents nor the title, which makes tracking them down quite difficult.

And it's possible I'm just flat out wrong.

I'm not sure if they ever used comics. A quick search didn't turn anything up. The only comics that come to mind were the ones I mentioned here pushing the Saemangeum project.

A gov't comic was used in '91 or '92. It was produced by the Ministry of Agriculture and Fisheries (if that was the name at the time) and was distributed to all the schools. Purpose was to instruct Korean children of the dangers of foreign food and to show them how to monitor and dissuade their mother's purchase of it. One of the pictures was a child scolding his mother. It sparked a bit of an uproar w/ Korea's trade partners.

Thanks for the comment. Would this be it? Might just have to make a purchase. The New York Times mentions it:

Trade relations have also deteriorated with South Korea, where American officials say there has been a backsliding on commitments combined with anti-American rhetoric. One example is a comic book published by the National Agricultural Cooperative Federation, a farm group controlled by the Government of President Roh Tae Woo, showing that foreign food products are unhealthy and that their purchase would force Korean farmers from the land.

Actually, searching through Google News turns up a lot, but this Kyunghyang Sinmun article has a reprint of the Washington Post's reprint and translation. Looks like fun, especially this paragraph from the Post article:

Several consumer groups, angry over perceived U.S. "interference" in Korea's domestic affairs, threatened a boycott of American goods unless the United States apologized for its trade pressure. And even the semiofficial Yonhap news agency, weighed in recently, declaring: "If date rape is what happens when a man forces his attention on his girlfriend, then what the United States is doing to Korea in the name of free trade deserves to be called trade rape."

Sounds like we have a trio now: A U.S. trade representative, a GI, and an English teacher walk into a bar...

At any rate, matt's link suggests it was from Nonghyup, a non-government collective, not the Ministry of Agriculture and Fisheries, a government agency.

The article does describe Nonghyup as "a farm group controlled by the Government of President Roh Tae Woo," but I'm not so sure how true that is. It seems that would be like saying the UAW is an arm of the Obama administration.

matt, nice find. Didn't occur to me that it would be for sale. 20k won is a bit steep. It was a freebie 20 years ago. I was looking through some of my boxes of Korean treasures w/o success. I don't recall the cover, but I also don't remember another comic of the same ilk being published, so it highly likely you found it.

kushibo, you'll notice that I specified the early nineties, which is clearly neither the era of The DJ nor Roh the II. I was providing info re "Using Manhwa for PR" rather than answering your question about comics used in The DJ and Roh the II era.

I think you don't know nonghyup all that well. A good start is the research of Larry Burmeister who has long studied it. Like much of modern it can be traced back to Korea Pres. Park. And like almost everything else in Korea at the time is was run by the central gov't; its leaders were often high-ranking military officers. This parastatal entity
helped advance two national development goals. Of course it was to organize crop production and distribution. Moreover, the gov't used nonghyup's farmers to subsidise the domestic fertiliser industry, which was the starting point for the petrochemical component of Korea’s heavy industrialisation drive in the seventies. Nonghyup was entrusted with the development of two strategic businesses, agriculture marketing and fertiliser supply. BTW, Korean farmers paid higher than world market prices for fertiliser, and Korean consumers paid higher than world prices for rice.

Fast forward to Chun's overthrow. Though there was liberalisation within nonghyup, there wasn't much of it within the central gov't. Neither Roh the I nor YS Kim tossed out bureaucrats; central control remained strong. It wouldn't be until '97 and The DJ's admin that central gov't control would lessen.

On to the comic. Based on what I've provided you, I'm pretty confident it can be labeled a gov't produced comic book. But let's imagine for a moment it is a non-government comic as you state. How would you explain this non-governmental agency's success in distributing the comic to all the government controlled schools of 1990 Korea?

seouldout wrote:
kushibo, you'll notice that I specified the early nineties, which is clearly neither the era of The DJ nor Roh the II. I was providing info re "Using Manhwa for PR" rather than answering your question about comics used in The DJ and Roh the II era.

Sorry, my bad. I did in fact think you were answering my question, but that you were doing so with an "oh, here's another example" kinda thing. Obviously, judging by your comments at The Marmot's Hole and elsewhere, you are clearly knowledgeable enough to recognize that 1991 or 1992 are not the Kim Daejung era, so my apologies if I sounded like I was correcting you or something.

As for Nonghyup, although I'm familiar with its Park-era origins and some of its military-era functions, I thought that by the late 1980s and early 1990s it had morphed somewhat into a bit of a leftist organ that gave cover for the chinboistas, since their pro-Pyongyang, anti-government teachers' union and student union were not yet legalized and taking up the cause of the peasantry was within their ideological time frame.

From there, fighting against the ROK government's willingness or acquiescence to open up all sorts of economic activities through the Uruguay Round of the WTO, if I remember correctly, became a cause célèbre for them. More importantly, it pit them against the government. IIRC, the protests were, like in 2008, more against Seoul for selling out the farmers (or consumers), than against Washington.

And if I'm right about that, a Nonghyup-produced comic book may actually be counter to the government's commitments at the time, enough that I'm not so sure it would be appropriate to call it a government-supported comic book similar to the one on Ch'ŏnan. (And it would take me a while to look for dead tree media to support my point; I'll try to thumb through some yearbooks when I get to the library.)

How would you explain this non-governmental agency's success in distributing the comic to all the government controlled schools of 1990 Korea?

If the chinboistas were using the famers' cooperatives to promote their agenda, it would make perfect sense that they would try to push that through in the schools. I'm not saying this is what actually did happen, but it's perfectly plausible, since that's what they've done with other issues.

It wouldn't be until '97 and The DJ's admin that central gov't control would lessen.

Maybe so, but that wouldn't preclude chinboista infiltration, particularly at lower levels, a popular m.o.

How accurate is this statement? (Asking, not saying.) If Nonghyup is the financing arm of the Ministry of Food, Agriculture, Forestry, and Fisheries, what is Suhyup then? This sounds a bit like an oversimplification, but even if it's exactly right, does it preclude Nonghyup acting independently to influence public opinion against government action in favor of the peasant farmers?

At any rate, I'm not setting off to show that the use of such comics is not a Korean thing or that it's only a right-wing government thing. If chinboistas embedded in Nonghyup were behind this despite some government control over their organization, that would be a sigh of leftists using the same tactic. It would be interesting to know if something directly from the government came down during the Kim Daejung or Roh Moohyun administrations, especially to counter complaints of right-wing government abuse of public opinion.

I think you're right.