As has been noted by Roboseyo, there's quite a lively discussion about interracial relationships going on, starting here, where commenter Jake (a co-founder of Asian Male Revolutions) left comments painting white men and especially the Korean women who date them in a less than positive light, followed by James' rebuttal at the Grand Narrative, and this response by I'm no Picasso, who I agree with Roboseyo is the best blog I've come across this year.

I left a comment at Grand Narrative yesterday, and I'm going to expand on it here. In the comment I pointed to an article that needs some setting up first. Three years ago, several articles appeared in the Korea Times written by Jason Lim. He seemed to have a dislike for English teachers, which came out in this article in late 2007.

I still remember being chewed out by the president of the language institute I worked for 10 years ago because I hired a Korean American UCLA graduate who was far more qualified than one of those 'Let's travel through Asia while earning money as English teachers and score some women at the same time, dude!" types of instructors that were so prevalent in those days.[...] Many lacked professional qualifications, lied about their academic training, and enjoyed less than exemplary lifestyle involving the proverbial sex, drugs, and rock n roll.

This article was criticized by Brian Deutsch at the time. Also worth reading is this article, which did a great job of taking Yonhap to task for this hatchet job (which expressed similar attitudes as Lim's article):

This article is not a search for the truth but a list of disparate episodes that have been connected in such a way as to create a narrative that is unjustified, inaccurate and dishonest. It's alarmist. Worse, it's outright racist because it attributes certain failings ― in this case, nothing less than a failure of character ― to a whole group of people based on the actions of a few individuals because they bear superficial physical resemblance, come from comparable cultural backgrounds, or share a similar language skill set.

It's a well written article, but most surprising is that it was written by Lim himself. He explains his change of heart in this article, where he elaborates on his feelings towards foreign men:

I was a bigot because there was an ingrained prejudice deep in the darkness of my mind that, somehow, Korean women were the exclusive property of Korean men. I was the self-appointed knight in shining armor protecting those who needed no protection against those who weren't even threats, except in the irrational and selfish recesses of my mind. And if you didn't need my protection, fie on thee. I am going to marginalize you as sub-Korean and insult you as a Yankee lover. So the betrayal I felt was toward the Korean women who would debase themselves with foreign men, and the violation I felt was an attack on my bigoted sense of what ought to be.

Do read the rest of his article, and more articles can be found at the Times by doing a search for his name.

One wonders what people of this mindset (and I don't just mean a dislike of interracial relationships, but also the offering of pseudo-academic justifications for such relationships that attempt to rob them of legitimacy and their participants of agency) would react to this film (the sound isn't great, but it's worth watching):

Then again, people who are opposed to such unions probably rarely (never?) have the opportunity to see them from the inside, as that film allowed its viewers to do. This video by T(Tasha) (Yun Mi-rae) talking about her childhood gives a pretty good idea of what it was like to be "marginalize[d] as sub-Korean." [I just noticed this was posted in the comments of James' post as well.]

I've written before about negative portrayals of white male English teachers as sexual predators, and the reactions to them in the Korean media, as well as a comparison of media portrayals of western men and western women, with women invariably being portrayed as sex objects. How long this portrayal of western women has been going on, I'm not certain. Perhaps when Seo Jae-pil returned to Korea in 1896 with an American wife, people started getting ideas (his protege, Syngman Rhee, certainly followed in Seo's footsteps, and thinking of the opinion that "A Korean man dating a white woman is an indication of self-hatred" (from I'm no Picasso), I can only chuckle at the idea of a self-hating Syngman Rhee, first president of the ROK ).

Okay, it likely didn't start there, but what I did find interesting was, while searching through 1970s-era newspapers, I kept coming across pictures of foreign women in bikinis. Here are a few examples, with some translations: 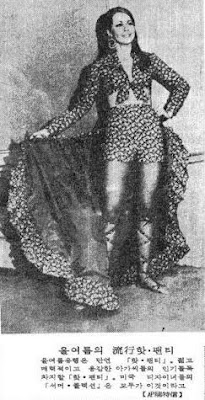 [That one is amusing to read since it reads in hangeul as '핫팬티,' which sounds like 'hot pantie(s)' in English.] 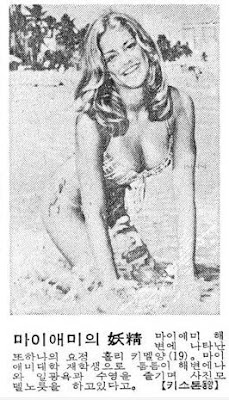 "Holly Kimel (19), another pixie who appeared at Miami beach. Enrolled at Miami University, she sunbathes and swims in her spare time, playing the part of a model." 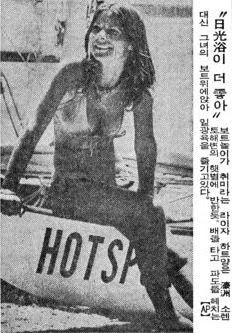 January 31, 1976
Liza Hart, whose hobby is boating, sunbathes sitting on a boat after a boat ride at Sorrento Beach in Australia. [AP] 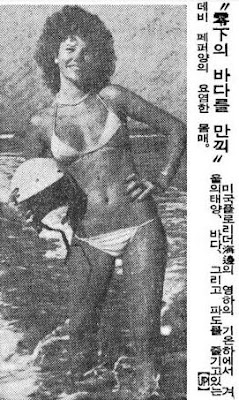 February 5, 1976
“(I) enjoy the freezing sea”
"The voluptuous body of Debbie Pepper, enjoying the sun, sea and waves in below zero winter temperatures at a beach in Florida, USA. [UPI]" 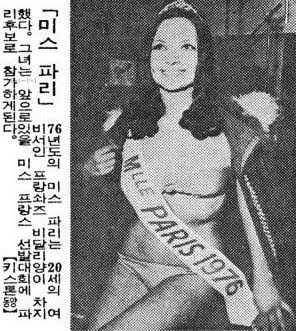 
Just in case you think they are all white women, that isn't the case: 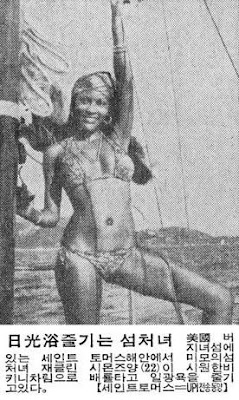 February 3, 1976
Island beauty Jacqueline Simmons (22) sunbathes on a boat while wearing a cool bikini on the sea near Saint Thomas in the US Virgin Islands. [UPI]

Some of the photos come from places other than AP or UPI, however, and feature somewhat more 'local' girls: 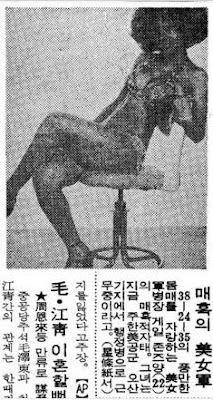 December 03, 1976
"Bewitching female US soldier."
"Proud of her curvy measurements of 38-24-35, Female US sergeant Gale Jones (22) has a captivating figure. She is currently serving in the USAF at Osan AB. [Stars and Stripes]" 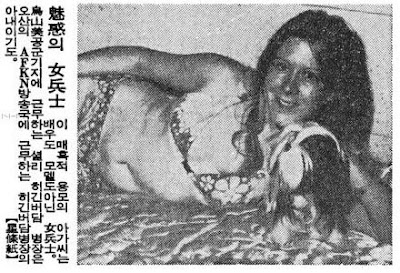 March 2, 1976
"This captivating young woman is not an actress or model, but a soldier." 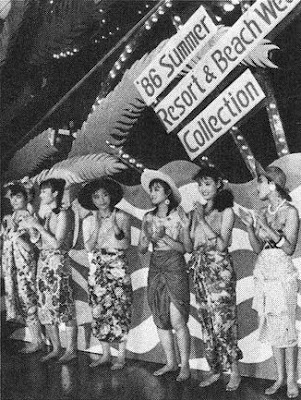 In fact, it could have been 20 years - or perhaps almost 30 years later, and you might have seen almost the same amount of skin.

This 1976 advertisement, showing a mother and daughter, show how far along the western beauty ideal had come by that point. 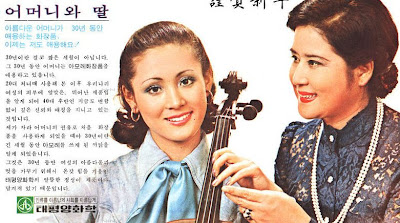 At any rate, I'm not sure when this practice of publishing photos of western women in bikinis started (all of those photos are from the Kyunghyang Sinmun - I didn't look through the Chosun Ilbo's archives, so I'm not sure when they started with their galleries of school girls), but it suffices to say that western women have been portrayed like this in newspapers here for at least three decades, and for most of that time Korean women were most certainly not seen scantily dressed in newspaper photos - and neither were western men. I can only imagine that portrayal of western women filtered into the culture in other ways (Hollywood movies, for instance, though really racy stuff would have been censored back in the day), and I don't think it's that difficult to start connecting the dots between this selective portrayal, the fact that only foreign women were used as models for lingerie (though this is apparently changing), and, "Are you Russian?" Still, there's an irony in the fact that the images published in these Korean newspapers (or the films showing western women as sex objects which might have been shown in Korean theatres) were made in the west (AP, UPI, Hollywood), so the west's own sexism (ie, in the Toronto Sun, the Sunshine Girl is on page 2, while the Sunshine Boy is buried somewhere in the back), has helped shape the Korean view of western women as well.
Posted by matt at 9:01 AM

Whenever the subject comes up--which thankfully is quite rarely--I acknowledge that my Korean wife and I are indeed a mixed family--I'm Methodist and she's Korean.

We once knew a half-black Korean-American woman who was raised in Korea. She was cheerful enough, but neither of us cared to dwell on what her childhood in Korea must have been like.

Don't forget So Jai-pil Philip Jaisohm) who married an American woman in the late 1880s/early 1890s (don't have my notes). What I find interesting is the very limited number of early Korean/Western relations.

The earliest that I can think of was Lowell in 1884/5 who supposedly lived with a Korean woman. The next would be So Jai-pil or the French missionary who allegedly returned to France with his Korean lover. The Korean girl spent a couple of years in France and then returned to Korea where she committed suicide. In the 1910s Dr. Irvin in Pusan ran away with and married his Korean mistress.

I have no idea when (but I would like to know) when the Western/Korean relationships became more common.

Matt, I don't have your e-mail address, but I just wanted to let you know that my friend sent me a very enthused e-mail after reading your post:
"That article you posted on Facebook about resentment to Yellow fever and associated links are awesome and occupied pretty much my whole morning at work."
Keep up the excellent work!