Which is the Korean race's biggest holiday?

Old news, I guess, but I was just looking through this article and came across this statistic about the rainfall last Tuesday:

The Gangseo region in southwestern Seoul and Gangnam area in the southern part saw 293 mm of rainfall[.]

I live in Gangseo, and had had no idea how bad it really was until later. I woke up to the wild sound of the wind and rain and went back to sleep, opting to stay in until it had mostly stopped. I'd noticed that the ground floor of my building was quite wet, and figured water must have gotten in (it's on an incline, where you need to go down two steps to the back door, and up four or five steps to the front). There didn't seem to be any sign of flood or water damage in the area, however (including a nearby basement supermarket).

A few days later, a friend of mine showed me his cell phone photos of his trip back to Banghwa-dong from Bucheon that day, which revealed streets that resembled rivers, and shots taken from the rear door windows of the wake of the taxi in this river.

I decided to look around and found this article which has quite a few photos of the effect of the rain on the Gwanghwamun area, Gwanghwamun subway station, and Kyobo bookstore, as well as Cheonggyecheon. 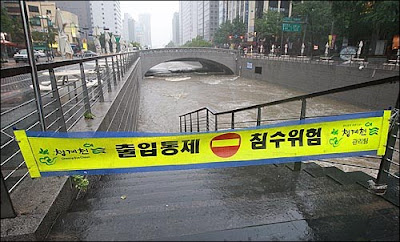 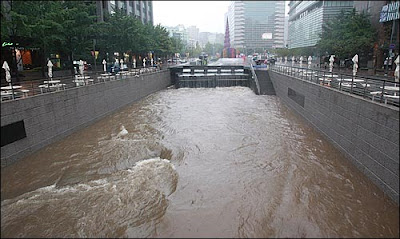 I believe the last time it looked like this was during the flooding in 2006, when the Han River overflowed its banks.

One thing that got my attention was this caption on almost all of the photos in the Ohmynews article: "민족 최대 명절인 추석 연휴 첫날인 21일 오후..." As an introduction to the photo, it reads, "On the afternoon of the 21st, the first day of [our] race's biggest holiday..." Okay, I guess minjok could also be translated as 'nation,' (as it may be here, where "the nation's biggest holiday" is used) but it seems to be an example of how overused the word minjok can be. I can understand a description like that being in English-language articles, as there might be an expectation that the fifteen or so foreign tourists who read the KT, KH, and Joongang (combined) might not know much about Chuseok, but it seems rather odd to use it for Korean readers, though a Naver search reveals that it is widely used.

That it might be little more than a rhetorical flourish, however, is revealed in a cafe post (first result here) where the poster says that last Lunar New Years, an announcer on TV clearly said that Seollal is the minjok's biggest holiday, only for announcers to say last week that Chuseok is the minjok's biggest holiday. He asked, "So which one is it?" and then complained that he'd fought with his wife for two hours due to this broadcast and the question it raised. There was no complaint about the use of the term minjok itself, of course, but it does seem that there's awareness that some media outlets overuse superlatives attached to the term.
Posted by matt at 1:15 PM

I curse the day that the Japanese brought that word to this place as "minzoku" to describe the great Yamoto Race.
Geez, leave it to the Korea "minjok" to rip-off a term like this.

Has the wonderful science of genetics and DNA profiling not taught these NE Asians anything?