The Joongang Ilbo published an article the other day about covering and modernizing outdoor traditional markets:

[M]any of the 1,550 traditional markets around the country have gone through [...] renovations during the past decade.

Leading the effort to transform Korea’s regional markets are the Ministry of Culture, Sports and Tourism and the Korea Federation of Small and Medium Business, or Kbiz. The two collaborated to launch a project to transform traditional markets into more than just retail spaces and is trying to add “culture” to the mix.

The project is called Culture-Tourism Markets, and it was launched in 2008 with initiatives for 18 traditional markets in Korea worth up to 20 billion won ($17.1 million). Both the government and private sector are investing in each market, and the Agency for Traditional Market Administration, under Kbiz, is handling the actual execution of the projects.

As part of the mass-makeovers, markets introduced cultural programs like merchant theater groups that perform inside the markets. In addition to remodeling the exterior and interior of the markets, famous regional tourist attractions have been specially branded and connect to the markets.

It also has a nice photo of Jjimdalk cooking in the Andong market - a dish which makes it well worth visiting. A year ago I posted about the covering of Bangsin Market it Banghwa-dong. Here are some more photos of it after the renovations and covering were finished. 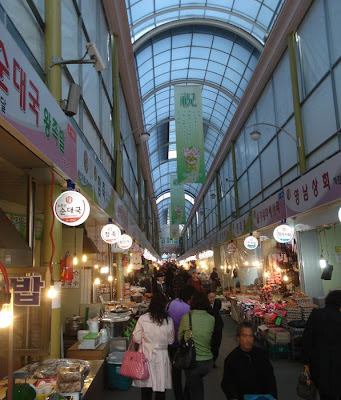 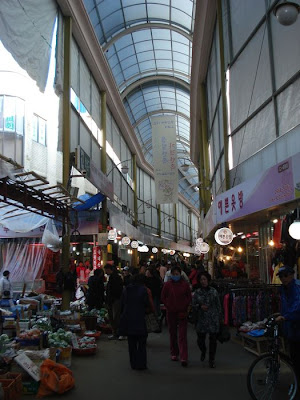 There's now standardized signage and lighting, and the entrances all look similar: 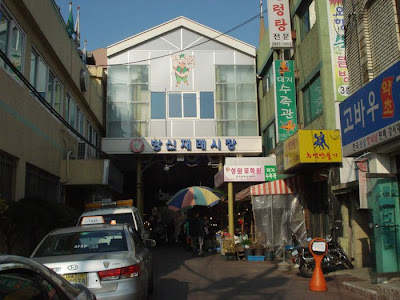 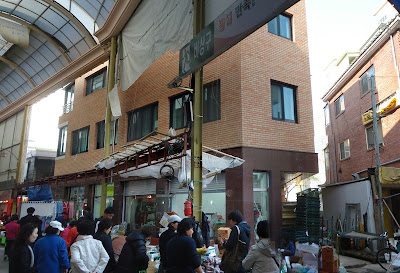 Above is the new building which was erected after a fire destroyed the previous buildings in March 2009. 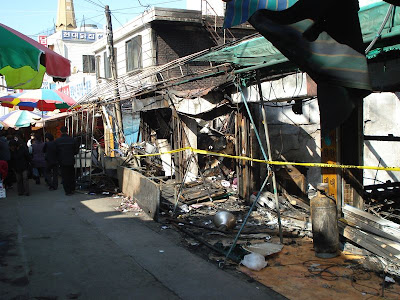 The article goes on to mention that in Japan some covered markets are not being uncovered so as to become more 'authentic.' I'm not sure if the covered shopping arcades I've walked through in every Japanese city I've visited are the same as the markets the article refers to, but it's interesting that the Japanese are moving in the opposite direction. It's hard to believe that 15 years ago most shopping was done in markets or small stores, while the market share of modern retail formats such as department stores was only about 14 per cent. More on that change can be found here and here.

I just look forward to the day when they start tearing down apartment complexes to build modernized hanoks.
Posted by matt at 10:49 AM

The resilience of SoKos to remain outside no matter what the weather is eroding. If covering markets is what's necessary to get people to shop the traditional markets during inclement weather, so be it.

If there really is a trend in Japan to uncover some markets, I wonder what the weather is like in those parts of the country (or is it uniform across the nation?). After all, (I think) there are a lot more people in parts of Japan with a climate like Pusan or Cheju than there are in South Korea.

Actually, I'm thinking not just in terms of heat/cold but also precipitation.

Uijeongbu's covered market looks very similar to those pictures. The seafood section is unbearable though with no room for the stink to dissipate.

If the uncovered markets are anything like the ones I saw when I was in Japan, which is possible considering they were in Asakusa and touristy/traditional area, they might be talking about some sort of retractable/movable roof replacing a permanent building.