Nice to see the Korean media in top form regarding U.S. speed skater/great satan Apolo Anton Ohno. You'd be forgiven for overlooking, in this article (via Brian), that Korea had won the gold medal.

For South Koreans, the name Apolo Anton Ohno doesn’t ring the most pleasant memories. And Ohno made a comment that made South Koreans bristle.

Ohno won a silver medal at the men's 1,500-meter short-track final at the Winter Olympics on Saturday in local time in Vancouver as two South Korean gold favorites -- Sung Si-bak and Lee Ho-suk -- crashed into each other in their final stretch toward the finish.

The incident made Ohno, who was trailing behind them, grab the silver medal.

You have to wait awhile for that piece of information, though. Which strikes me as odd, considering Ohno won silver, a medal - along with bronze - which when won by a Korean is usually followed by an apology to the nation for not winning the gold and being the best. But then, if we remember what happened in 2002, we shouldn't be surprised, considering the damage done to the nation the way in which the Korean media ignored the fact that it was Korean skater Ahn Hyun-soo who caused the four-skater wipeout that cost Ohno a gold medal in the 1000m race three days before the more (in)famous 1500m race.

Shocking that the US commentators above didn't engage in histrionics and compare Ahn to Osama Bin Laden or something like that. Or like this: 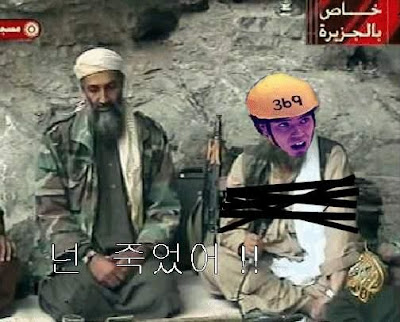 You're dead!!
Another example is here. Intelligent, thought provoking stuff, to be sure. Another article mentions that, regarding the 2002 incident:

The incident so enraged Koreans that some say he contributed to instigating anti-American sentiment in South Korea.

I'd like to say that it was more likely the Korean media's biased coverage that contributed to it, but then considering the reliance of the media on what netizens (who could all be the same person, for all we know - that's not really an exaggeration of how the internet panic that fanned the 2008 Mad Cow protests came to be) have to say, I guess it's a bit of a chicken-egg proposition (it did seem to influence this happy sunshine(policy) little tune). At any rate, such Olympic-related go back further than 2002. As Ian Baruma described the Seoul Olympics,

Korean chauvinism was often hysterical, particularly when it involved Americans or Japanese. During the games, many ordinary Koreans went out of their way to be polite and helpful to foreign visitors. But there was a mean-spirited edge to comments in the Korean press. When the Japanese brought over for the first time since the end of the war an entire Kabuki theater troupe, the Korea Herald ran a headline saying: "Coarse Kabuki Show Fails to Impress." The play, the story went on to say, "stirred up bitter memories of the Japanese samurai culture, or Japanese militarism…which clashes with Korea's time-nurtured consciousness of literati." I thought of the images I had seen in the papers of Korean athletes being drilled in boot camp, wearing full military gear, and screaming "Fight, fight, fight!"

As I noted in more detail before, the New York Times also had an interesting article:

The uproar began after American television audiences watched a Korean crowd explode Thursday night after a referee's decision to penalize a Korean boxer. Enraged Korean boxing officials punched the referee, some threw chairs into the ring, and a disconsolate boxer staged an hourlong sit-in to protest the decision.

Koreans' shame at the incident has turned to rage at NBC and other foreign news organizations' coverage both of the boxing imbroglio and of South Korea itself.

NBC was accused by, among others, members of the ruling Democratic Justice Party of being anti-Korean, even of insulting the "Korean identity." One wonders whether Bryant Gumbel even knows what the Korean identity is, let alone desires to insult it.

According to a man running a law office interviewed by the NYT,

''I heard that NBC repeated the boxing scene for an hour,'' Mr. Chung said. ''It was news, but it was not something to be picked over like that.''

I'm sure the same could be said regarding this latest Ohno episode.
Posted by matt at 1:17 AM

They took down the video.

The incident so enraged Koreans that some say he contributed to instigating anti-American sentiment in South Korea.

I think it was a symptom of, not a cause of, the anti-American sentiment that was going on in 2002. It was just a perfect storm crap, precipitated in particular by the "Axis of Evil" comment which had a lot of Koreans freaked out that there would be a war with North Korea — started by the Bush.

but then considering the reliance of the media on what netizens (who could all be the same person, for all we know - that's not really an exaggeration of how the internet panic that fanned the 2008 Mad Cow protests came to be)

How right this may be:

During that period, 41,944,832 people visited Naver News. Of these, 350,545, or 0.84 percent, left at least one comment. This means that less than one person in a 100 who read a piece of news leaves a comment. And of those that left comments, the 11,878 members of the “Super-Comment Tribe,” who write on average over 70 comments a month, left 2,212,813 of the 4,373,306 comments that were left during the 10-day period. In other words, they were responsible for 50.6 percent of the total comments from the survey period. The Super-Comment Tribe might make up only 3.4 percent of commenters, but they form the “hub” that manufactures Internet opinion. Yonsei University psychology professor Hwang Sn-min said, “That comments are driven by a minority of netizens means it’s hard to consider them representative of Internet opinion.”

At any rate, the KT report notwithstanding (and Brian got it very wrong with part of his criticism about Yonhap and KT, I think most Koreans who care about this are mostly pointing the finger at 이호석, not 오노.

Calling for International Olympic Committee Criminal Record Checks on people like Lee, Kun-hee(former Chairman/CEO of Samsung) who are allowed to participate in Olympic Medal Ceremonies.
http://www.koreatimes.co.kr/www/news/nation/2009/12/116_58119.html
Apolo Anton Ohno and J.R. Celski were both let down by the United States Olympic Committe(USOC) and the International Olympic Committee(IOC). I couldn’t believe it when I saw Lee, Kun-hee walk out and give flowers or whatever he gave to the 3 medal winners of the 1500m Short Track Race. After all the hard work Olympic athletes put in they get awarded by having a big-time criminal come out and give you something/shake your hand etc…Appalling, I’m calling for people to contact their homeland Olympic Committee and the IOC http://www.teamusa.org/contact_us/ngb
Or an IOC member i.e.
http://www.olympic.org/en/content/The-IOC/Members/Ms-Anita-L-DEFRANTZ/

Weirdo dude in toronto. Where is Zanta now?

The Korean short track teams should be banned, if not, the entire event should be. Korea usually dominates/wins most medals but still whines and crys almost constantly during events no matter what. It's time for the IOC to act. Why isn't more attention brought upon male coaches beating teenage Olympic hopefuls/athletes? Of course the link below isn't the first time this has happened...
http://www.cbssports.com/olympics/story/7877340

Nice point bringing up the reference to Koreans' general Olympic behavior and the boxing incident.

Shouldn't they be happy that they took the gold? Here's my two cents on my Korea/America blog.

This is probably a reason Samsung and Lee, Kun-hee can do anything they want in the eyes of the IOC...
http://www.olympic.org/en/content/The-IOC/Members/Ms-Anita-L-DEFRANTZ/?articleNewsGroup=-1&articleId=76859
Let my quote an excerpt..."And for the first time ever, Samsung makes the WOW technology platform available to the general public for Vancouver 2010 allowing fans from around the world to download and install the Public WOW Application to receive up-to-the-minute information, including real-time Games progress,
medal standings and more on their Samsung mobile phones."

I'll have to go into my local LG Telecom store in Seoul and see if I can get "up-to-the-minute information," in English? Someone might think there isn't a connection between LG and Samsung but when I had a problem with my phone in the past I had to go to a Samsung service center to get it fixed.

Such silliness over something the rest of the world couldn't care less about. What the heck is short track speed skating anyway???
Looks to me like a bunch of dorks
dressed up like blue Kermit the Frogs on ice. Let's put those boys in a hockey ring and see who survives!

Exit86,
Yes, what is Korea doing in the Winter Olympics anyway? They compete year after year in the same events.

Is there any Koreans competing in snowboarding/halfpipe?

Is the woman Korean, I can't find the pic on the net now but I saw a tv report and she looked asian...?
http://www.cnn.com/2010/SPORT/02/20/lago.snowboard.pictures/index.html

I saw a tv report/picture and she looked Asian, could be Korean. I think the pic is being hidden, must be a very important female kissing Scotty Lago's bronze medal below his waist. He has left the Vancouver voluntarily.
Congrats, Apolo Anton Ohno for doing something no Korean short track skater will ever do!

Scotty Lago getting his medal kissed by a Korean female(below the waist...
http://www.tmz.com/tag/scotty+lago/

Is this worse than Englishspectrum gate? He doesn't teach English on the side does he?

If Scotty Lago was half Japanese can you imagine what would happen?

You can find the picture in this report on AES going to the low-quality English teacher source itself, Vancouver. ;)

Is the woman Korean? Well, some have speculated it's Michelle Kwan.

The four-skater wipeout you discussed is particularly famous in Australia, because that wipeout directly contributed to our first-ever gold medal in the Winter Olympics. Indeed the name 'Steven Bradbury' has become synonymous with success attained through the failure of others; for example winning a game by default because the other team failed to show up on time. "Looks like we just pulled a Bradbury."