[Update]
I was thinking about how in my last post about Kim Yuna that the people watching had clearly never seen her James Bond program before, and realized that the women in Dunkin' Donuts didn't realize that Kim had clearly won - Asada would have had to give birth to baby Jesus on the ice to beat her - so I guess that explains their gloating over Asada flubbing the landing on one of her jumps. Explains it, but doesn't excuse it, it my eyes. 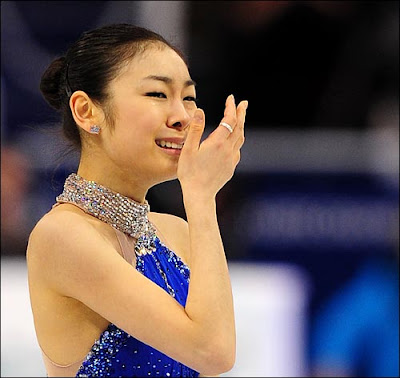 Kim Yuna's reaction after skating a clean program.
Kim Yuna not just won, she shattered her own previous records for long program and combined total, scoring 228.56 points (18 points more than her previous record). An outstanding performance on her part for both of her programs. You had to feel for Mao Asada, who must have known it would be impossible to top Kim's score (she came right after Kim). I watched them skating at the local Dunkin' Donuts, where half dozen customers (all young women) cheered in delight when Asada flubbed a landing. Nice, especially when it was clear Kim had already won. Asada still did well, at 205.50 she got the best combined score of her career, but it was just not good enough to beat Kim. At any rate it was nice to see Joannie Rochette overcome the personal tragedy of the past week to get bronze, and odd that the final top three were the same as the top three in the short program. 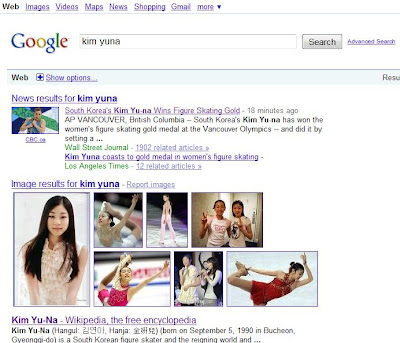 That's what the Google results for "Kim Yuna" are at the moment, and the top right picture of Kim and Asada links to my blog (here), resulting in some 6,800 hits Wednesday, and 4000 hits in the last hour. Fun.

Yeah, I was in a restaurant and some ajjuma scoffed and gloated at the Japanese mistake. The rest of the customers were OK, though.

Maybe now the mad dogs of the Net will leave Jim Hewish alone. Or not.

Check out this Yuna fan

Great for her! I'm not a fan of any skater but of how she performed last night, I can really say she deserves the gold!

Congratulations, that's an insane number of hits. You didn't put up the link to that old post, so I'm curious, how did you label the picture? Did you get any new comments to that post about the "rivalry"? I wonder if people actually read it, or simply opened the picture.

Canadian, what do the Beijing Summer Games uniforms have anything to do with Kim Yuna (or the Vancouver Winter Games)?

Wow. I saw a bump of about a hundred or so over the past week from "Kim Yuna+nude," but nothing like that.

Canadian, what do the Beijing Summer Games uniforms have anything to do with Kim Yuna (or the Vancouver Winter Games)?

Darth, The Canadian has been inundating dozens of Popular Gust posts with the same links over and over again. Thanks to post subscription, my own inbox this morning was flooded with dozens of emails from this mook.

Brian,
Thanks, it is pretty wild. The post in question is here, and I just translated the photo's Korean title: "we are rivals and friends". There haven't been any new comments about the rivalry - just a few about Yuna. Perhaps they just opened the photo.

When you look at Google now the photo is not on the front page, but is still near the top when you look in the Image Search. I "only" got 7600 hits yesterday.

Kushibo:
"Kim Yuna+nude" - ah, the internet. And now, now - let's be kind to the 'Canadian' I obviously mean a lot to him, and after leaving 150+ spam comments over four or five hours on a Saturday night, it's clear he doesn't have a life. 150+ comments! It'd be funny if it wasn't so sad.

I had two students in the same classroom with their names as "Kim Yuna". Those were their actual names. Thankfully they went by English names in class.
I currently teach an actual Park Ji Sung.

Canada inspired by impromptu national anthem: "With Britain leading by one in the last end, the crowd began belting out "O Canada" en masse, forcing the curlers to halt play until the song ended." ""I thought it was hilarious," Murdoch said. "That's not something you're ever going to see ever again, is it? A curling game coming to a complete standstill due to the crowd cheering the national anthem. It's great to see." Go Canada!

Darth, The Canadian has been inundating dozens of Popular Gust posts with the same links over and over again. Thanks to post subscription, my own inbox this morning was flooded with dozens of emails from this mook.

Ah, I'd only seen one of his posts and didn't realize he was a spambot. Galbijim has it's own spambot problems, but they don't seem to be doing anything to stop them (maybe they are, but it's ineffectual?).

Not a spambot, but a spammer.

Well, not exactly same same. If the spammer is who I believe it is, it's a person who has it in for matt, and that may make him more of a nuisance that's hard to get rid of. Spambots don't yet have the skill to have it in for someone — not yet.