I had just finished the last post and the title popped into my head, based on this poem by Francois Villon (arguably France's best medieval poet, who seemed equally happy making allusions to classical figures as writing about his exploits in bars and brothels, and also someone who escaped the gallows for murder and theft). Translated, the line 'Mais où sont les neiges d'antan?' means 'But where are the snows of bygone years' (quoted in such different places as Tennessee William's Glass Menagerie and Quentin Tarantino's Inglourious Basterds). The point? After writing the title and posting the post, I looked outside. 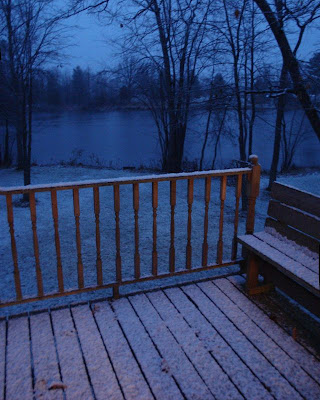 I'm sure what's fallen in the last hour will be more than Seoul will get all year, unfortunately. Because hey, if it's gonna be cold, you might as well have snow. As it turns out though, Seoul's lack of snow isn't anything new. As Percival Lowell wrote of his visit to Seoul in 1884:

Owing to the latitude of Soul, thirty-seven and a half degrees north, the sun's power there, even in midwinter, is so great that the snow at the sea-level never lies deep upon the ground. After a heavy snow-storm, the evening before, it is surprising to those accustomed to more northern latitudes to notice how quickly it vanishes in places exposed to the sun. If it were not for repeated additions, there would be very little even in the depth of winter; and as the season advances and the days lengthen, you may trudge homeward some night through a heavy fall of snow, to find on the next afternoon no trace of it left. You have therefore, almost simultaneously, the coming of snow, like a snow-storm in New York, with a disappearance of it worthy of Virginia ; and yet it may be far colder on the day it vanishes than on the day it appeared.

I guess the lack of snow explains why people my age remember using spent yontan to roll into snowballs to make a snowman when they were young...
Posted by matt at 8:42 PM

The photo is '쓸쓸하다'.(I think there's no suitable word for this in english.)
I don't remember using spent yontan to make a snowman. (I remember some evil children using that to make stronger snowballs for snowball fight.) When I was young I had lots of snow a couple of times every winter. so we could roll big snowballs and make a big snowman. My cousin even made igloo for me.(nice memory..)
I still keep making snowman whenever it snows in the same place.
But we get less snow and hard to keep the snowman. it melts too soon..

Peaceful it the word that comes to my mind. I could do with such a view as antidote to hectic Seoul...