My own private subway station

I've written about Line 9 and posted photos of Sinbanghwa Station before, but there is another station nearby, out in the fields of Magok-dong, called Magongnaru Station (due to the fact that there will be a marina and lake park there one day). This station is in the middle of the fields, with only farm roads to access it, and while the construction is essentially finished on it, it will also connect to the Incheon Airport Subway line, and that line (and that part of the station) is under construction nearby. I'd ridden past it before, but had only figured out how I might enter the last time I went by. 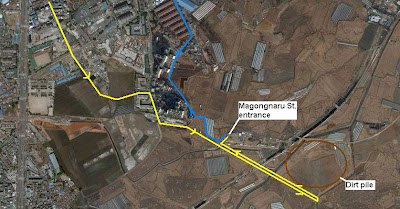 On my way I followed the street I (used to) live on and continued on into the fields. As there are scrap metal places all around, I'd assumed it was off limits and a dead end, until a student told me she walks to school using that path every day (we confirmed that was the entrance by using the 'road view' function on Daum Maps). So, I ventured off down the path.

There were several boards laid down at points over the mud, though why the fields were flooded I wasn't sure - for the first time, there are no rice crops being planted this year. It seems this area's development will come about in the relatively near future.

On the other hand, there were quite a few vegetable patches being planted by old people, and the spot where buildings for the Line 9 construction once stood is now a 'weekend farm,' with little plots for several people. At any rate, I headed off towards the main part of the Magok fields, and came across the construction for the Incheon Airport Line, which is quite a bit more extensive (and deeper) than it was two years ago (in fact, I find it hard to believe it's been that long). 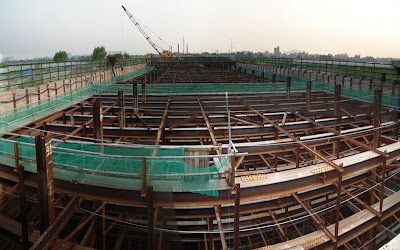 Visible from the streets that border Magok-dong is this massive pile of earth, the result of digging the tunnel for the Incheon Airport Line through the fields.

As dusk approached and the elderly people gardening near the slightly raised mound to the west that covers Magongnaru station started to head home, I headed for the only subway exit built so far (ironically, it's at the opposite end of the station from the guard houses). 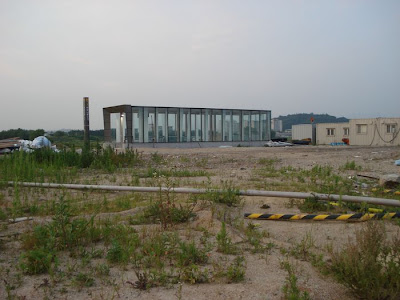 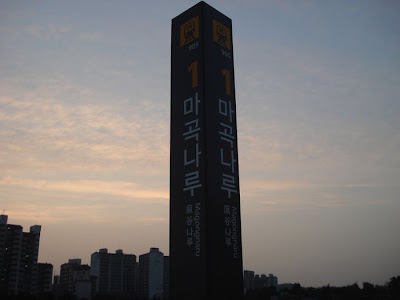 There were a few workers off in the distance, but no one was near the exit, so I (quietly) headed down. 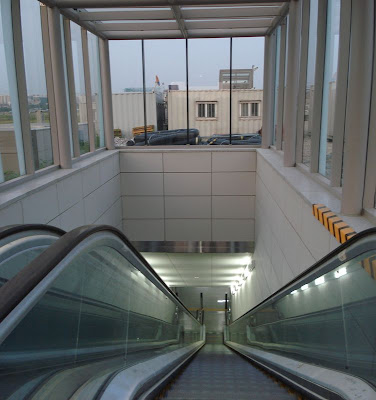 What was eerie was the recorded voice (set at too loud a level) booming from speakers at the bottom of the escalator repeating the same announcement over and over again...

...and in the empty, cavernous station, it echoed and could be heard almost everywhere. 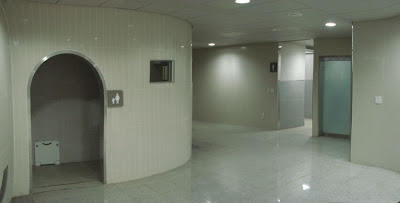 There was no one around, though there was still some work to be done. Below the wires sticking out of the floor for the as-yet non-existant turnstyles are visible.

I went off to the left and came to the escalators going down to the subway platform (I didn't see any stairs in the station at all).

The platforms were also empty, except for the train that passed by (but didn't stop, as this station, much like Magok station on Line 5) will not open for years. To the right above is the regular train, while on the left is the express train. 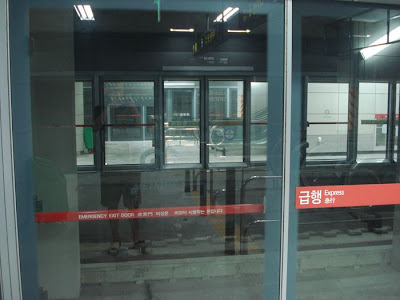 I then headed back upstairs into the still empty station, passed by the endlessly repeating announcement, and headed home. 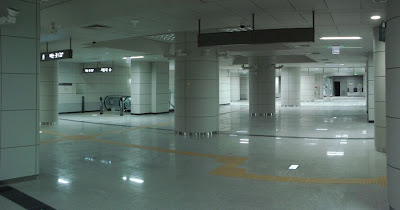 On the way home, I passed by a neighbourhood next to the fields that I'd photographed last year, only to note that the buildings all lacked windows. I knew then how I'd be spending part of the next weekend.

Here's a short video of the visit:

Here at Dangsan they have blocked up all the entrances to the new Line 9 station. At first it was green construction netting, but now all the entrances (except one that's out of the way and not so obvious) are blocked off with 2m high wooden boards.

I noticed that Gonghang Market was boarded up the other day; Sinbanghwa might be as well now. The reason Magongnaru isn't is because, being in the middle of a field, they don't expect anyone will drop by.

nice video. i get a real "2001: A Space Odyssey" feel from that empty subway station.

I remember the photos of the empty station from your camera.