I quit my job and moved out of the apartment I'd lived in for over five years. All I can say is: Leaving packing to the last minute? Don't do it. Nothing like spending 24 hours straight packing. 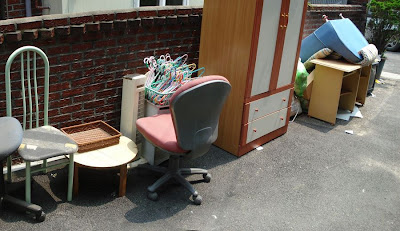 What amazed me was how quickly everything disappeared (it was in a neighbourhood of villas, so it's lower or lower middle class housing). The chairs, TV, the metal on the bottom of the sofa chair, the fridge and washer, all of it disappeared within an hour or two of it being put out. One man knocked on my door and we had kind of a funny conversation, as he asked me if everything above had been thrown out, and I said, yes, everything. He then asked if he could take the wardrobe. Take anything, I said. It was when he thanked me in Mandarin that I realized he must be the guy with the Chinese name I've seen on the bills in the mailbox over the past few years.

Anyways, I enjoyed lots of food before heading back to Canada for a few months. Green tea-flavoured naengmyeon: 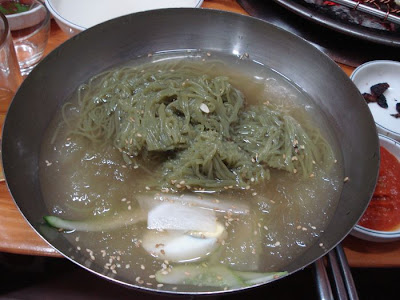 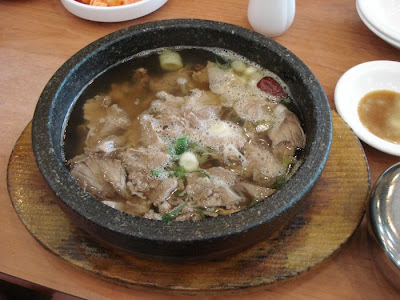 Jjim-dalk (not as good as that found in Andong, but pretty tasty, and with the friend who introduced me to it in 2001 (on the same street, to boot): 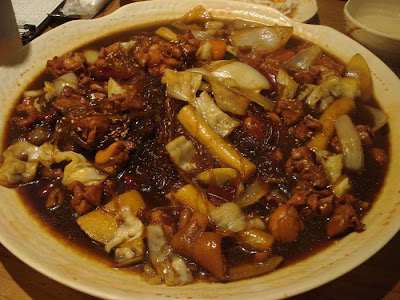 Dubu-jeon (while I'd eaten several 'dubu-dipped-in-egg" dishes over the years, I hadn't had anything quite as good as this (or with the name 'jeon' in it)): 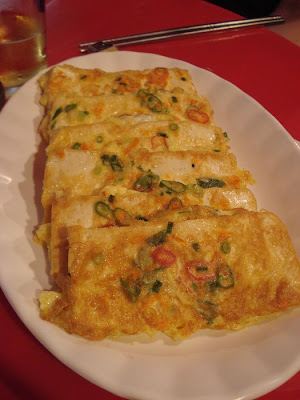 Two friends drove me to the airport and brought along kimbap and jumeokbap to eat at the airport (along with our Dunkin' Donuts coffee). I'd never actually had real jumeokbap before, and filled as it was with tuna, it was delicious. It was purchased at the Kimbap 365 near my (former) home, which I hadn't realized was possible. A nice send-off snack. 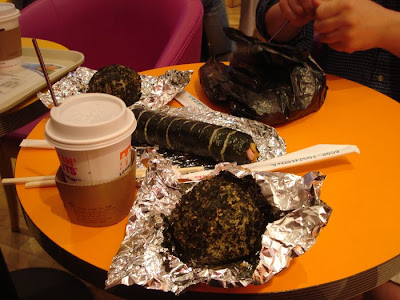 And I can't even begin to describe my gratitude to my friends for the ride to the airport, as the weather last Thursday was horrible - pouring rain which made it hard to see the road. In fact, we saw three accidents on the Incheon Airport expressway, with this one being the worst: 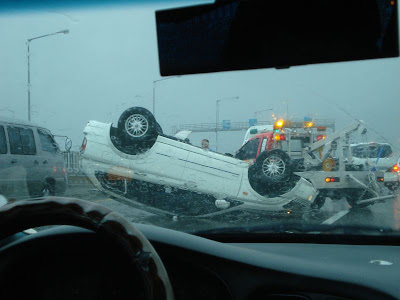 A bus next to the car with a dent in its left front corner made it clearer what had happened.

It was a pretty painless flight all in all, except for the baggage carousel in Toronto - it was full, jammed, and no other bags could get onto it. I was thinking I should just start pulling bags off, when someone asked a worker if it was not his job to remove the bags. When he tried to shirk the responsibility, another guy in his late '20s asked if he could volunteer for the job, I said I'd help, and the two of us cleared the bags while everyone else watched. Within five minutes the carousel was cleared enough that the baggage was flowing again and I found and grabbed my bags and headed home. I still find it perplexing (and amusing) that people just sat there not helping, even though it was in their best interest to do so (it certainly turned out to be in my best interest!).

I'll be on a very slow, 26 kbps internet connection for the summer, so blog output may slow down a bit (especially when I'm at the cottage, where there is no internet at all (not even a road into the place, actually). I'll try to schedule a few posts though...
Posted by matt at 6:58 AM

So you're coming back, right? I mean, you're not going to stop posting, right? This is one of my all-time favorite blogs, and Korea would not be as bright a place if I didn't have this blog to use as an occasional reference point.

kushibo:
Yes indeed, I do plan to come back. Thanks for the kind words.

Matt Strum:
Yes, the car blocked two lanes, and the bus that hit it blocked another, so traffic was almost stopped dead. The other accidents I saw weren't as bad - in one, a car likely hydroplaned into the guard rail.

You're lucky you made it to the airport.

In seven years of driving or being driven to IIA, I've never once encountered anything resembling a traffic slowdown on that highway.

Enjoy your prolonged vacation, and glad we'll have you back eventually.

I never thought you would leave Banghwa Matt, although you did mention it when I was there in January. The last of the old crew to leave there, makes me feel a little sad and nostalgic, although we do have a Korean guy from there staying with us for a year.

So amazing that that little apartment can fit so much stuff huh?


Anyway man, have a nice few months chiling out. Any plans to go down and visit Scott south of the border?

The terrible picture(car accident) is on here!