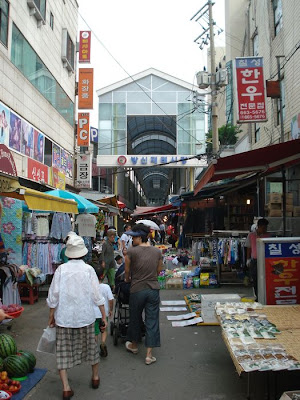 I've mentioned Bangsin Market before in less happier times - after a fire destroyed several shops back in March - but a month or so ago I was surprised to see construction surrounding the market, as a roof was being built. I went back the other day to take a few photos. 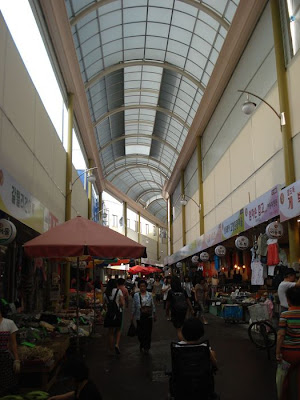 Here it is from above: It's nice to see that the market is being supported by the local government. The market is usually quite busy, especially on weekdays, and usually serves as a source of vegetables, fruits and meats for nearby households (as opposed to heading to one of the nearby small supermarkets or to Nonghyup or E-mart). The market also branches off of Banghwadong-gil, the street which curves from north to south and from which Banghwa-dong originally grew. It can be seen at the top right of the map above, from perhaps 50 years ago. 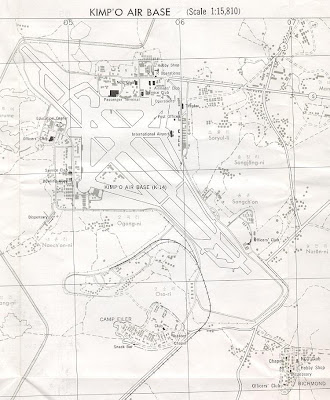 Photo from here.
The street can be seen below running from north to south below, with the other streets from that time marked. The street running from east to west at the bottom of the map is Gonghangno, and was built when Kimpo Airfield was built in the early 1940s (as a Japanese air base). The red line represents Bangsin Market. 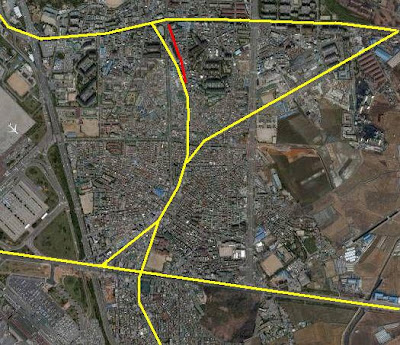 One of these days I'll do a post looking at the history of the area - I've just amassed so many maps and photos over the past few years that it's hard to know where to start...
Posted by matt at 2:39 AM

hey man, i was arguing with Jon Dunbar last night about the Cheonggyecheon restoration vs. people's history/victims of said restoration, and then there was an NYT article about it today so i wrote about it and linked to your stellar entry from May '08. god, what an awesome piece. it filled me with shame to even write about the same topic, but thanks anyways. hope canada is fun, and keep up the nice work!

I think the covered markets are a nice idea. They're very common in Japan, but not so common in Korea, so I hope this is part of a trend. Just last week I was in Hiroshima, specifically in Hondori, talking with a Japanese friend with an interest in Korea about how this is one of those things that would go over well in Korea.

Traditionally located markets are competing with big-box discount stores. If they want to be able to get more foot traffic, they have to be more accessible, and by that I mean more comfortable to visit. Or rather, less uncomfortable.

This is so true. I love the little markets in Korea and although I know next to nothing about econmics I've always felt a nagging sort of worry at how much business the "marts" must be taking away from them.

I try to do one big shop at a department store (for organics and imports) and then once a week I hit a chain supermarket for booze and bread and stuff but the rest of the time I try to use the market. All this running around means that I get lots of exercise too! Lol. Lot's of pointless information in this comment.

The covered markets are common these days in Korea.I have three in my area. Competition with big shopping malls. They cannot survive without reconstruction.
But I still prefer E-mart or Hyundae department store.

it's nice to have a cover for the rains

Thanks for pointing out the NYT article Andre - I hadn't seen it. To be fair, the writer writes about environmental issues, and much of what he writes is true, but the he spends no time at all looking into the larger picture, into how it was all carried out, and the social costs of the process of uncovering the stream. He also misses that the whole point of Cheonggyecheon was to make Gangbuk more competitive and attractive to foreign investors and to serve as a focal point for the redevelopment of the entire downtown area (including Gyeongbokgung, which is being 'restored').

Kushibo:
I find the covered markets in Japan to be more like covered malls - a little more upscale. I agree with you that markets need to be more accessable, or they will only serve the immediate area.(And I hope you got to eat some okonomiaki in Hiroshima).

Melissa:
I tended to run around to several different stores/areas to shop as well. I think there might be some stats on the dropping market share of markets in one of my posts on convenience stores.

Anonymous:
The two markets in my area were not covered (and now only one is) while most of the markets in Bucheon were covered (and there were also travelling markets that came to certain 'Maeuls' or apartment complexes in Bucheon once or twice a week). My area is poorer and is only getting them (well, one of them) covered now.

And Dokebi, yes, the covers are nice for the rain - I'm glad the market in Banghwa was finished before the rainy season (I just hope it doesn't leak).

matt wrote:
I find the covered markets in Japan to be more like covered malls - a little more upscale.

I agree, but I think this is for one primary reason: The covered markets in Japan are revamped central markets (in smaller cities) with covering a part of an integral and integrated part of the process.

By contrast, so far Korean markets that have been covered are smaller local (as in neighborhood) markets where the capping is a stand-alone process, not part of a sweeping revamping of the market.

But I think we'll see a change if older markets are revamped and include covering, or if new markets are built with a covering planned from the beginning.

My apartment is near Seoul Station, and not far from there is Huam Market. Huam Market is really old school, reminding me of what was in Shinchon until the mid 1990s, before Grace Department Store (which later became Hyundai Department Store) was built... yeah, I've been in Seoul off and on since I was a teenager.

Huam Market hasn't been upgraded because they've been waiting to see what happens to the area, which is now designated to be razed and replaced with medium-rise (15 to 20 stories) apartments. If the market is still zoned as a market, I could see them putting in a nice set of shops under a covering, à la parts of Hondori.

By the way, the neighborhood on the Namsan side between Seoul Station and Sookmyung University Station still has many nice old homes from before the war, all of which will be razed (along with the "newer" homes from the 1970s, 1980s, 1990s, and even this decade) to make room for those apartments. My 1935 home, which doubled as an office for my fledgling company, was a nice structure that was later knocked down by the no-class new owners. That's why I ended up buying an apartment, though, the tiny space wasn't able to have five or six people comfortably hanging about as before.

I agree with you that markets need to be more accessable, or they will only serve the immediate area.(And I hope you got to eat some okonomiaki in Hiroshima).

I had some nice Hiroshimayaki. iPhoto has been acting weird, but as soon as I get my photos downloaded, I'll post some pictures.