It's long been clear that the most expensive consumer item in Korea is an apartment. The Korea Times has an interesting article on rebranding apartments. 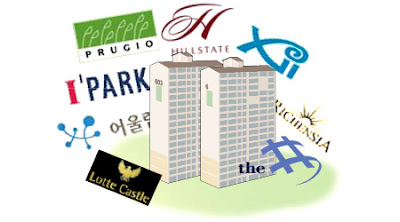 Dongbu Ichon-dong resident Kim Ji-na says her apartment value edged up about 20 million won (approximately $21,000) two summers ago at a time when the central Seoul, riverside area's overall real estate prices were at a standstill. What was the magic factor?

"The only recognizable change was that my apartment had gotten a brand facelift,'' she said. From plain "Daewoo Apartment'' to "Prugio,'' the Daewoo Engineering and Construction apartment buildings were slapped with fresh paint and a newly designed logo. [...]

Samsung E&C, the first builder to front its apartment brand "Raemian'' in 1998, enjoyed a significant boost in its properties' value, which triggered others, including Hyundai, Daewoo, POSCO and GS, to follow the same strategy.

And those efforts gave birth to GS' "Xi,'' Hyundai's "I-Park'' and "Hillstate,'' POSCO's "The # (Sharp) and Samsung's "The Tower Palace,'' all of which boast a luxurious image, posh living and unconventional design.

Of course, one bit of information about this, which Antti noted back in September of 2006, was left out:

A recent piece of news in Hankyoreh was that apartment blocks are forbidden to repaint their old names to match the "apartment brands" that the original construction companies are currently sporting. [...] Seems that those already did the repaint job are allowed to remain so, while the future offenders are levied a hefty fine of five million won (4000 €). (What is 5 mil W compared to anticipated housing price hikes?)

It would seem, considering the price hike mentioned above, that this rule is being ignored.

For an example of rebranding, here's a shot of a (very ugly - I like the green translucent covers on the balconies) Shin-donga apartment near my house taken in 2005: 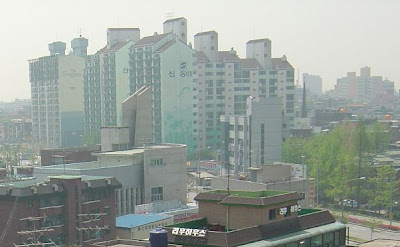 Here's a shot of the same apartment taken a few days ago, now branded as Shin-donga "파밀리에" (Familie): 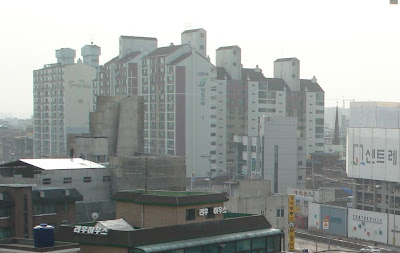 If having a look around the Familie website doesn't convince you of the degree to which apartments have become consumer items in Korea, perhaps this ad at a bus stop near Mapo Gu-cheong station for Hyundai's Hillstate apartments (in Paju) featuring Ko So-young will help: 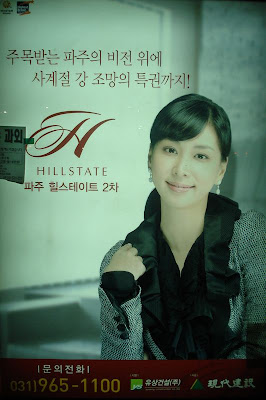 The icing on the cake is the ad for home tutoring taped to the Hillstate ad - the two largest drains on household finances together at last!
Posted by matt at 2:59 AM

Quoting an old post of mine (is it already that old?) is a bait I can't resist. I had to do some searching, and found out this one from Newstown, which tells that the Seoul Administrative Court had ruled that Dongjak-gu was not right in refusing the application of the residents of Lotte Nakcheon Apartment to change its name to "Lotte Castle." The residents had had the outer renovation made, 3/4 of the residents and the construction company had given their consent, but Dongjak-gu had refused the application on the grounds that "there are no specific rules." The wording of the ruling, quoted in the article, is interesting: "The surface or the name of an object has a value, and the value is becoming more and more important" and "nowadays, there is no need to refuse the residents' aspiration to increase the beauty and the cultural image of the apartment building."
So it'd seem that legislation is not there, and implementation of any regulations that there might be is not on a steady basis...

Thanks for the comment - the ruling is interesting, recognizing as it does the effect of branding. Taking it further into left field, when you consider that the most successful brand of 2005 - Cheonggyecheon - has no real substance (despite the attempts to link it with history, culture and environmentalism), you realize that it, too, derives its value from its outward appearance and name.