On Sunday I was at Hapjeong station and noticed the redevelopment there. With a camera and some time on my hands, I decided to have a look around. I'd found these renderings of the planned redevelopment awhile ago: 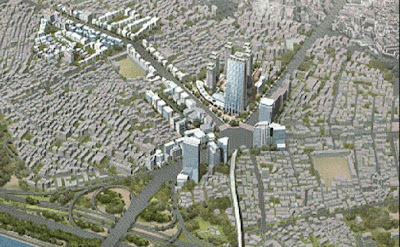 The Han River is at bottom left, and the street running towards top right leads to Hongdae and Sinchon. 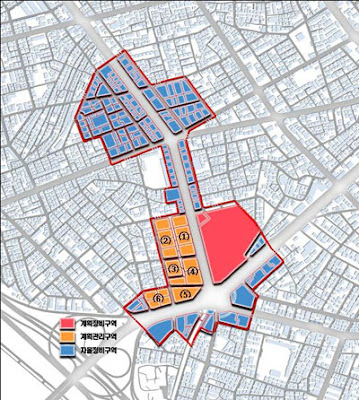 The pink section in the map above is the area that has been mostly demolished, and is marked off on the map below. Hapjeong Station is at the intersection. Also, a few of the tall buildings seen below at the bottom of the map seem to be part of the development. 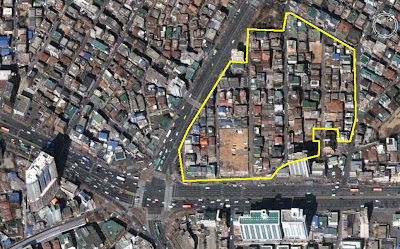 They can be seen upon entering the area:

As you can see only a few buildings remain standing.

Notice the single house cordoned off with a fence in the center of the photo below. It seems its owners haven't settled for compensation yet.

The single building standing at the far left of the photo above seems to have once contained bars on several levels. Here's a shot from the stairs inside: 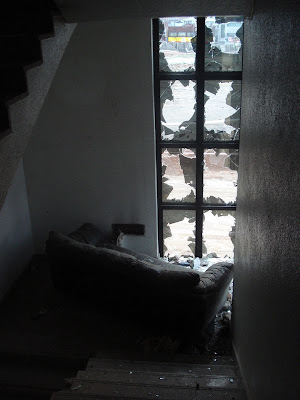 This photo was also taken from an upper floor in the same building:

Two more shots of the shell of a building seen on the right in the photo above: 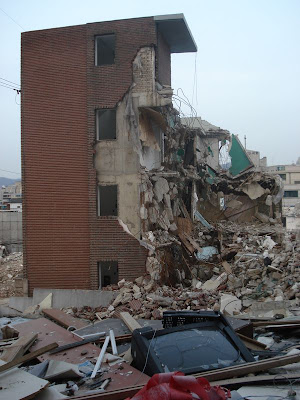 The shells of buildings facing a street which forms a boundary of the development:

The roads are still in use by people living in the surrounding neighborhood.

The road on the left above is seen at right in this photo, taken from the other side of the area.

It will probably be years before this section of the planned development is finished, to say nothing of the other sections.
Posted by matt at 3:40 AM

i had lots of pics of this contruction part but lost them all...and really appreciate sombody out there done this job. where did you get first two photos with Korean and lines? just curious!! thanks!

Actually, I forget where the top two photos were from... I'm sure it was simply by doing a Naver search for 합정역 or 서교동 and 재개발. It's too bad you lost your photos - it's pretty difficult to go back and take them again...

thanks for the reply. can u send me ur email i would love to send you some text about my question of redevelopment and idea etc? otherwise here is mine. jooyounglee25@gmail.com