My last post was just one example of many redevelopment projects in Banghwa-dong at the moment (many of which are within a five minute walk of my home).

Here's a map of developments that have occurred in Banghwa-dong between 1990 and the present; there have been quite a few of them (click to enlarge). 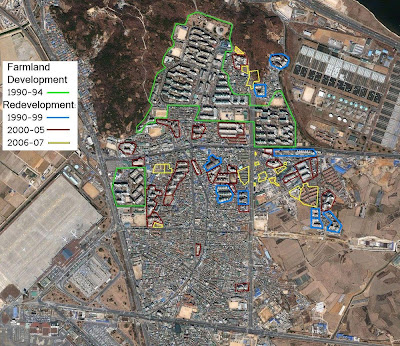 If you're wondering why the southern third of Banghwa-dong has very little development, it's because they're going to build a new town there: 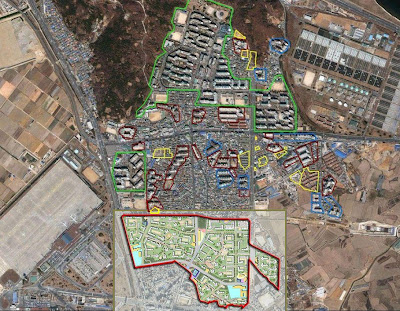 The fields on the right will be developed under the Magok 'R&D City' plan. This is just one of many plans floating around, so I wouldn't trust it too much.

At top right is the Incheon Airport Railway bridge, next to Gungsan (I took photos of both here). Banghwa-dong can be seen at left (my neighbourhood is jutting into the Magok area at top left - I love how it's depicted as being nothing but apartment buildings). At bottom center is the Balsan development.

I thought I'd try to animate (sort of) my map above, but the results aren't great on Youtube...