That's the translation of my new word for the day: 기절놀이. For the unenlightened (as I so recently was), this Joongang Ilbo article provides an introduction.:

An elementary school boy in Gunsan, North Jeolla, was found unconscious around 9 p.m. on Thursday at home by his father. The boy appeared to have strangled himself with a cord used to carry a book bag, police said yesterday. The child was moved to a nearby hospital, but died Friday.

“He used to play the choking game, in which he strangled himself with a rope. I have scolded him many times,” the victim’s father was quoted as saying by the police. Police believe the boy killed himself while playing the dangerous game. Choking has become an increasingly popular schoolyard activity in Korea in recent years among some elementary and middle school students, educators say.

In the game, youngsters restrict the supply of oxygen to the brain, often by pushing hard on the chest or through strangulation. It is said to create a sense of euphoria. 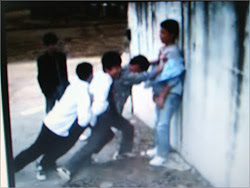 It is not the first time that the highly dangerous activity resulted in serious injury. In July last year, a middle school student in Iksan, North Jeolla, died after he passed out during the game and fractured his skull on the floor.

There are a few videos and photos to be found on Naver, but not many, though news articles referencing this pastime go as far back as June, 2004. The photo above dates from last year. The Chosun Ilbo also has a brief article about this most recent episode, while another photo, said to be of a boy holding a string intended for choking, can be found here: 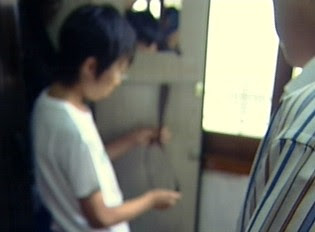 A news report using the footage from a year ago can be found here. In it, a young student is asked by a reporter why they do it. The obvious reply? "It's fun."

Apparently, it's thought to be fun by kids from all over the world, at least according to wikipedia:

Practitioner demographics are strongly weighted towards juvenile males but includes females and adults of both genders. The activity has been responsible for a large number of juvenile deaths and permanent neurological disabilities almost entirely among the juvenile male cohort. There are estimates that as many as 250 to 1,000 young people die in the United States each year playing some variant of the choking game. Tracking the exact number is difficult because many of the cases are reported as suicides.

You learn something new every day.

Oh, hold on, Lost Nomad has a post about this - the comments are worth reading. So does the Paint Roller blog, where Joe makes clearer the idea that this has come from the US (or elsewhere in the world) to Korea. Whether that was around 2004, when the first articles on Naver turn up, or earlier, I have no idea.
Posted by matt at 2:26 AM