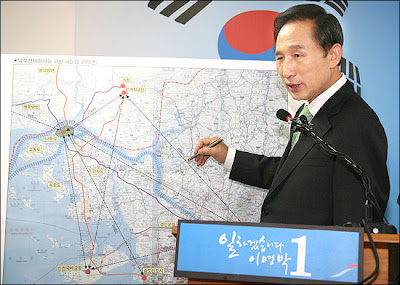 Yet another bone tossed to the construction industry (from here).
This is from a few weeks ago, on June 18:

Dubbed "Na-deul," which means a narrow waterway in Korean, the manmade island would be home to a 30- million-square-meter industrial park aimed at "combining North Korean labor and South Korean capital" and helping the communist country open up, Lee told a news conference at his Seoul office.

The island, proposed on the west sea of the peninsular, "would serve as an 'open square of unification' bringing the North out into the open," Lee said ahead of Tuesday's presidential policy debate within the Grand National Party (GNP).

Funny, last time I looked at a map of the west coast, there were lots of islands, so I don't really see the need to build a man-made island. Sure, people might live there already, but that never stopped Lee from booting merchants from the Cheonggyecheon area when it was redeveloped, or from pushing New Town redevelopments that have seen 76% of people forced to leave the Gileum New Town area, unable to afford the new apartments. Of course, pretty much every single endeavour Lee has undertaken has involved the construction industry, so simply moving everyone off their land may not be quite the handout of taxpayers' money that the industry was hoping for - best to build a fake island, to add to the fake stream downtown and the fake rivers his canal plan will create. In fact, he's linked the canal and the island together:

Lee suggested his proposed inter-Korean complex near the border with North Korea could serve as a gateway to the canal, adding the North would be open to the project. "There is nothing to worry about because the North wouldn't take it as a direct threat to its regime," Lee said.

A post on this topic over at One Free Korea touches on why it wouldn't be a threat:

Lee Myung-Bak wants to build another [Kaesong], even though the costs are so much more manifest than the gains. And if the idea isn’t stange enough, North Korea has about 300 miles of wasteland — just look on Google Earth – on which it could be built. Instead, Lee insists on helping Kim Jong Il isolate any reforming influence by building an island to put it on, which reveals just how insincere the reform-through-slave-labor theory really is.

Also to be found at One Free Korea is a very thorough look at Lee Myung-bak written two years ago, which also led me to an article criticising how much Lee spent on PR during Cheonggyecheon's construction and around the time of its opening (which may have helped it become the 'hit product' of 2005). Also worth mentioning is that Lee isn't doing anything new here, even for the GNP. I talked to someone in the planning department of the Gyeonggi-do government who told me that they had been planning for a few years (under Sohn Hak-kyu) to develop Paju into a transhipment area for goods from North Korea.

Of course, Lee may have other things to worry about these days, what with his reporting of fake residences coming to light, as well as his apparent selling of land to relatives in a district which was chosen as a New Town when Lee was mayor of Seoul. If the latter allegation turns out to be true, it will be interesting to see how he tries to weasel out of it.

As for Nadeul Island, I found this to be pretty funny: 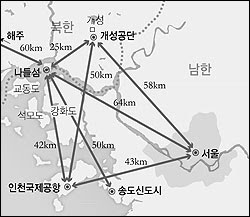 Look closely at the Han River in Seoul. Notice the two islands? One is Nanji-do, which disappeared decades ago (after it became a dump, and is now World Cup Park), while the other is Jamsil-do. I was surprised to stumble onto this fact as well - that the Jamsil area was once an island, and was reclaimed before being developed in the 1970s. What's also interesting is looking at the west sea coastline around Incheon, because it no longer looks like that at all. The Songdo new city should be about a centimeter south, and much of the coast is now several kilometers further out into the sea (though for some reason, despite it being an old map, they chose to make Incheon Airport (also built on reclaimed land) look correct). I wonder if, by choosing such an old map, the paper was trying to say, "Ahh, the whole damn coast is fake - why not built another fake island?" More likely it was just a mistake, but the juxtaposition is a little odd.
Posted by matt at 4:10 AM

Lee 'Putin' Myung-bak seems to get more bonkers all the time. For some reason I have this image of him lying awake in bed at night coming up with these crazy schemes. It sort of makes me wonder about the schemes that were just too crazy to make it into the light of day - perhaps a giant Korea-sized umbrella (the 'Usan21 Project') to prevent flooding in the monsoon season or an eight-lane bridge connecting Tokto to the mainland. The mind boggles.