My latest article for the Korea Times, "Itaewon once again at center of virus fears," looks at the COVID-19 outbreak in Itaewon, touching on topics I covered here and here back in May. Also worth reading is the article "COVID-19 devastates Itaewon businesses."

Here is the "Sorry! Foreigners are not allowed to enter" sign I mentioned in the article (from here): 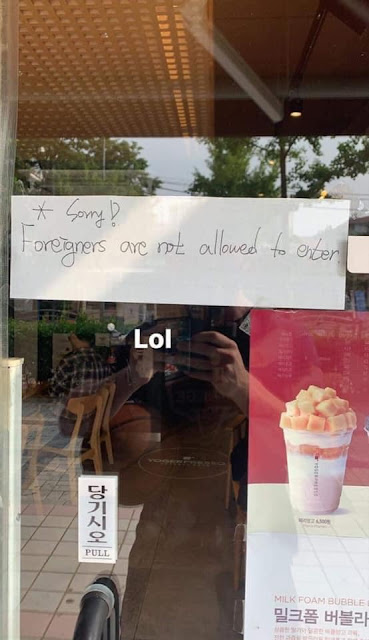 As for the recent removal of automatic re-entry for many visas and the need for a medical certificate attesting to a lack of COVID-19 symptoms in order to re-enter Korea (see here, for example), the government was quite open about its desire to "curb non-essential travel." Though, after complaints from chambers of commerce, the medical certificate requirement was dropped for business / journalism / academic trips of three weeks or less.

One announcement also reads that "As of 27 May, a total of 78 accumulated cases were reported since January 2020. This accounts for 53% of all 145 imported cases by foreigners, meaning long-term foreign residents are involved in over a half of all imported cases."

It didn't say how many of those long term foreign sojourners were on F-4 visas, but [as statistics available here reveal] while F-4 visa holders make up over 25% of foreigners on long-term visas, they only made up 5.5% and 5.8% of foreigners entering the country in March and April, respectively, so the number of cases involving them is likely small. Due to the Korean government's support of a race-based right of return for ethnic Koreans on F-4 visas, that visa category is legally separate from others, and to threaten to bar their return if they lack a medical certificate would require legal changes, unlike other visa categories for which the government has much freer reign to impose restrictions.

Still, considering that long term foreign sojourners have made up only 6.4% of imported cases, it seems to create burdens while having little positive effect on the caseload here, particularly considering that everyone gets tested at the airport anyways.


In other foreign teacher-related news, Yonhap published a report a couple weeks ago titled "Native-speaking teacher gets three and a half years in prison for production and possession of obscene material involving teenage middle-school girls."

It notes that a 31-year-old South African native speaking teacher in Suwon was sentenced to three and a half years in prison for violating the law on sexual protection of children and adolescents (production, distribution and possession of obscene material).

He must also complete a 40-hour sexual assault treatment program and is banned from working at child and youth-related institutions and welfare facilities for the disabled for five years.

He was prosecuted for taking and sending obscene photos and videos to two teenage girls he met through a chatting application in October last year.

Though he confessed to the crime and admitted the charges during the initial police investigation, in court he argued that there were procedural problems, and that he was not shown a warrant. Unfortunately for him, the police sergeant involved testified and the judge did not accept the teacher’s claim that he had difficulty communicating during the arrest because the police sergeant, who had served as a KATUSA , confirmed his English proficiency in court.

This is a pretty strong sentence - it seems authorities are starting to take these cases quite a bit more seriously than in the past - though I imagine the fact that he did not admit guilt or show proper remorse in court contributed to the length of the sentence.

What was odd about this is that after seeing more than 80 articles about foreign teachers and Itaewon after the outbreak there, I could only find 12 articles about this case. You never know what the media is going to focus on.

Also, if you remember the Canadian woman who was arrested by police for violating the Child Welfare Act after she showed young students a "what does human flesh taste like" video earlier this year (see here and here), a court ruled she was not guilty, mostly due to a lack of intent on her part and her lack of previous criminal record. Civic groups complained about the ruling, saying the children's testimony was not taken enough into account, though it seems she's already left the country.
Posted by matt at 2:10 PM