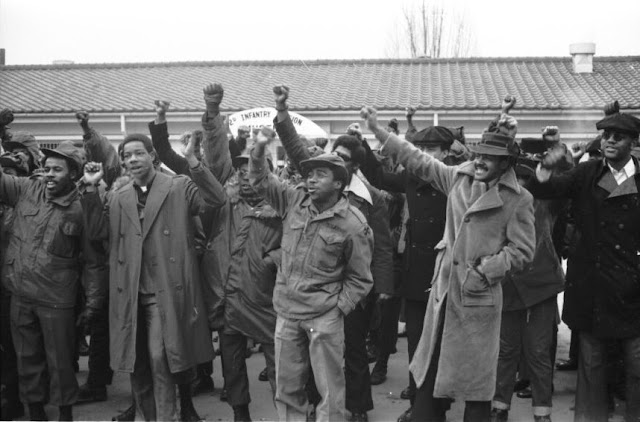 Years ago I wrote about the Anjeong-ri race riots of July 1971, which took place outside Camp Humphreys. In the comments to the two posts I wrote (here and here) a number of soldiers who served at Camp Humphreys left comments describing their memories of that event. What was confusing, I realize now, is that there were actually two incidents that took place that year, seven weeks apart, at Camp Humphreys, and the soldiers at times referred to both. The reason I understand this now is that I recently looked through my Korea Times archive, where I found a number of articles about black soldiers in Korea demonstrating against discrimination going back to at least late 1970. What set the tone for 1971, however, was a rally held by black soldiers in memory of Martin Luther King on January 15, 1971, the third anniversary of his assassination his birthday.

Here is the Korea Times article about the rally from January 16, 1971:

A few months ago, through this article by Jon Dunbar about Martin Limon's latest book, I was made aware of the newspaper Overseas Weekly, which was a tabloid weekly out of Germany that covered stories Stars and Stripes wouldn't. With the help of Jon, and Jacco Zwetsloot, we discovered that some of Overseas Weekly is preserved on microfilm here, but more easily accessible are some of its photos, searchable at the Hoover Institution (the Korea-related ones are here). It was there that I found scanned contact sheets for this rally (here, here, and here; click "Download low resolution copy" at right). I've posted some of them below. This page describes how the images of the rally itself were obtained: "All pix are of the protest meeting on RC One that the press were barred from. A guy slipped me the film." "RC One" referred to Recreation Center 1, which was located across the road from Camp Beard and next to the Yongjugol camp town in Paju. 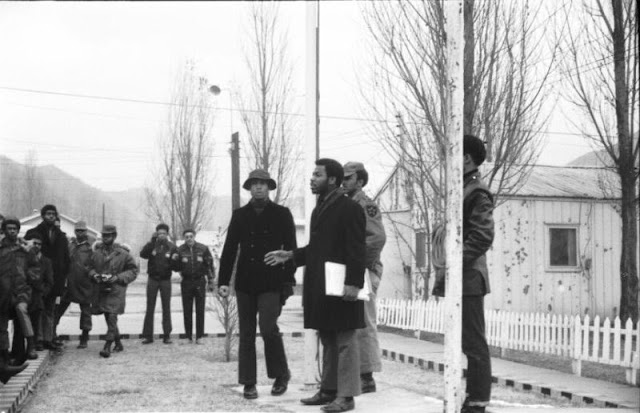 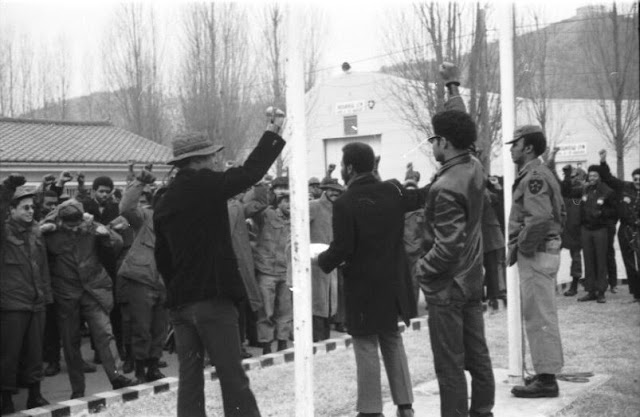 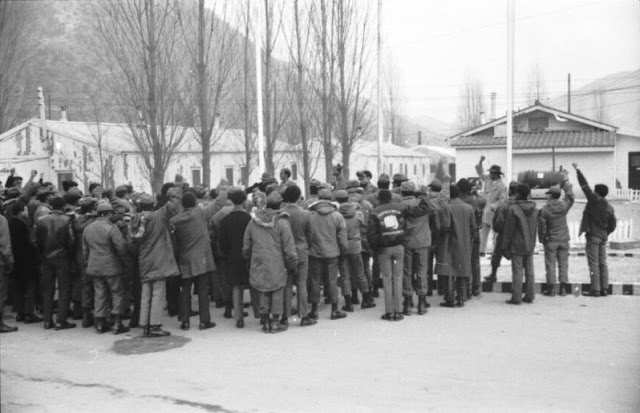 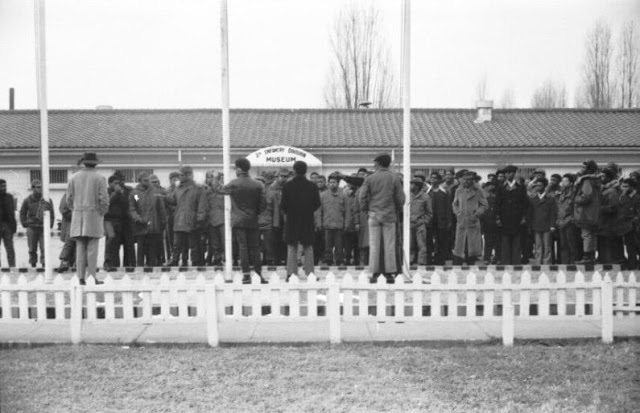 The rally was held in front of the 2nd Infantry Division Museum, then located at RC 1. 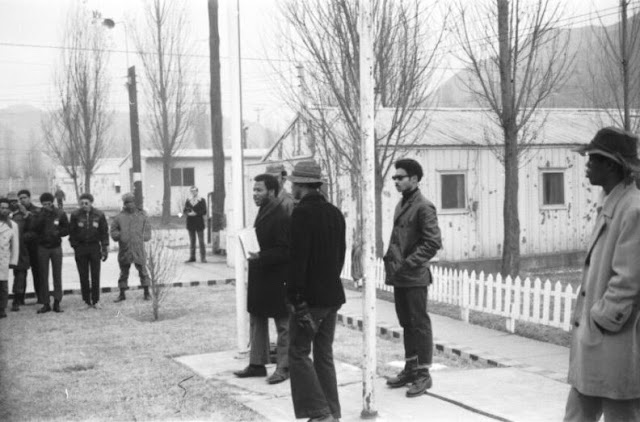 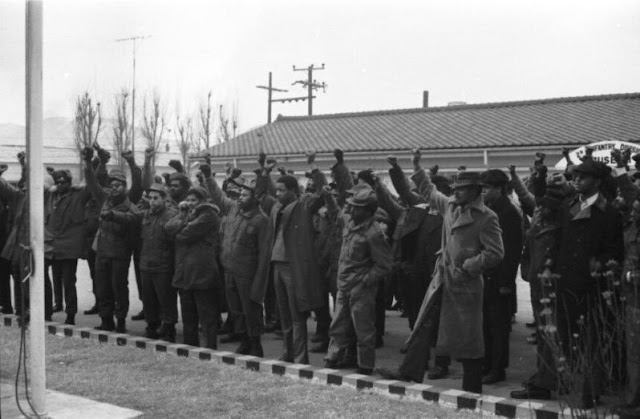 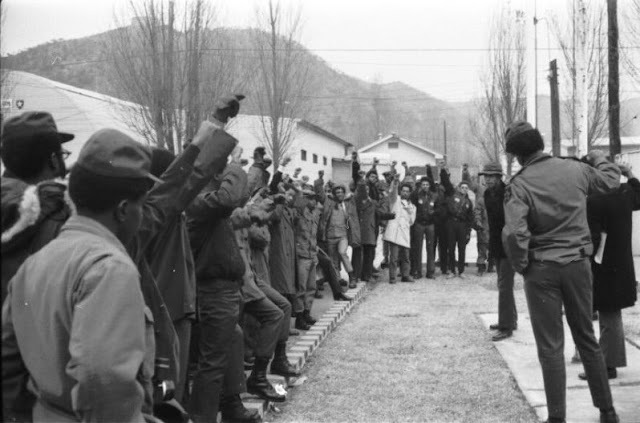 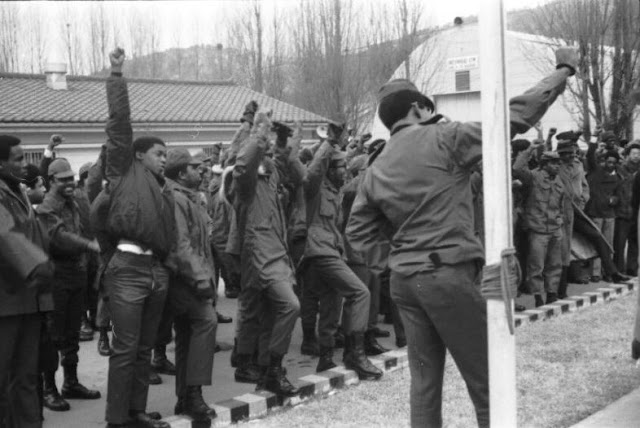 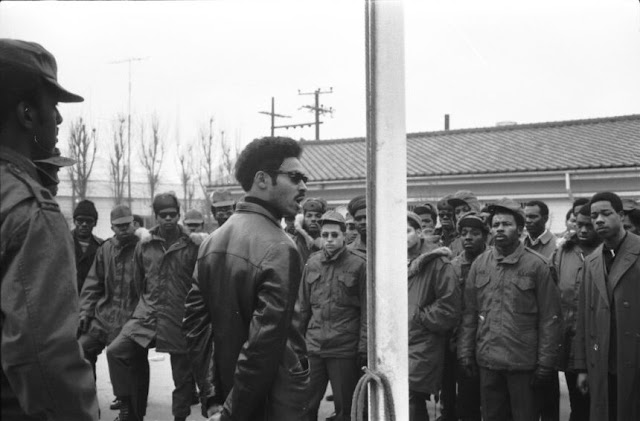 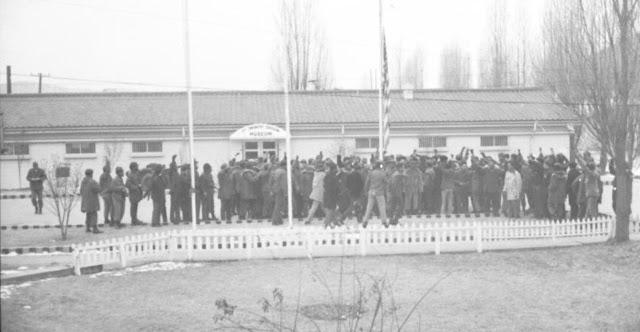 It appears they finished the rally by lowering the flag to half mast.

As the Korea Times article noted, however, there was a significant response to this rally by USFK. Below are photos of MPs gathered on the football field (and go-kart track) at RC 1. 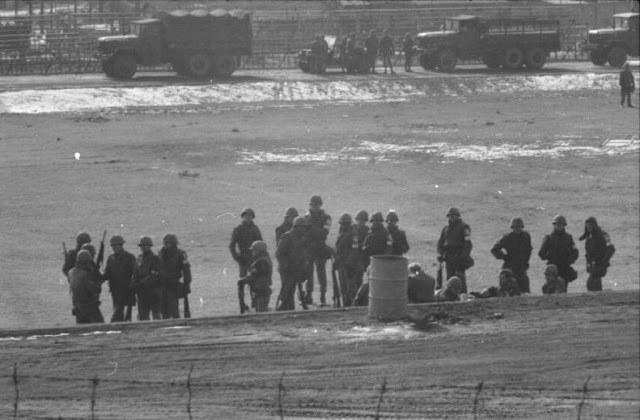 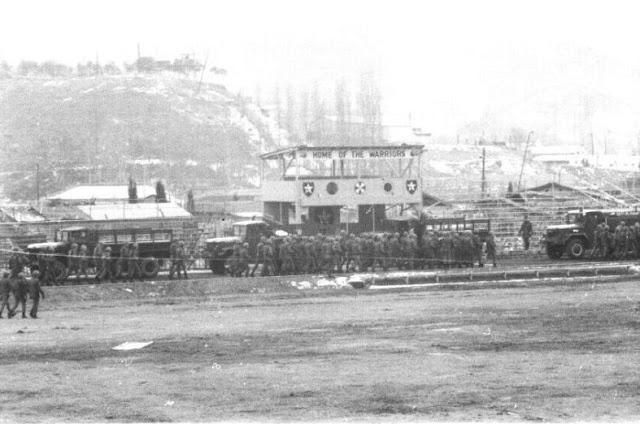 APCs on the move through Yongjugol. 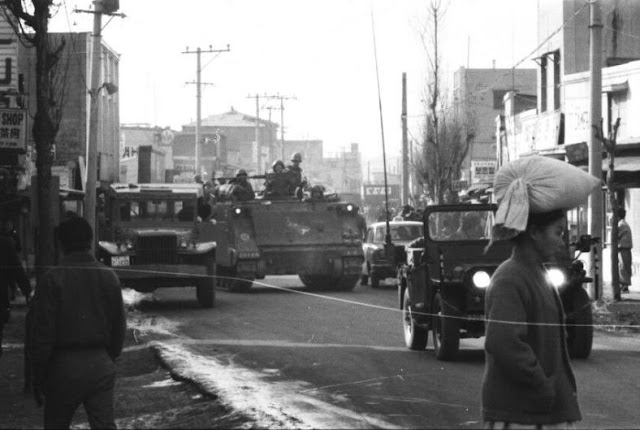 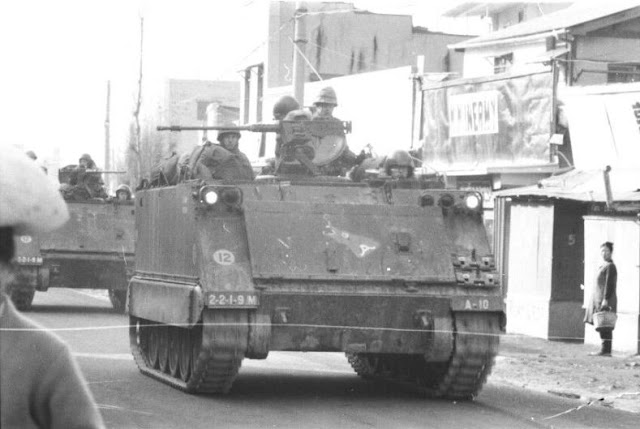 As for it not initially being clear, as the Korea Times noted, whether the movement of APCs to the area was related to the rally or not, the following photos make it clear they were in the streets as the black soldiers walked through Yongjugol. 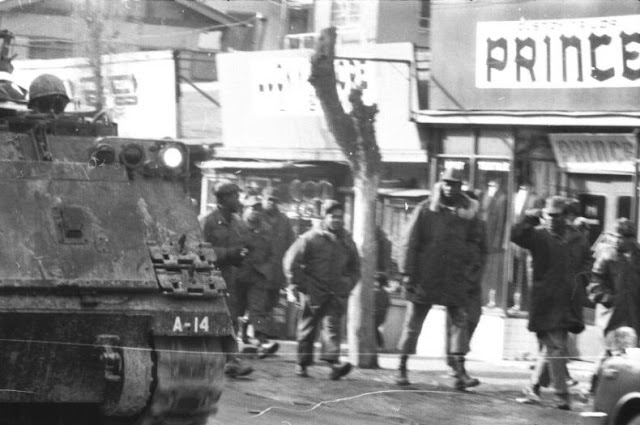 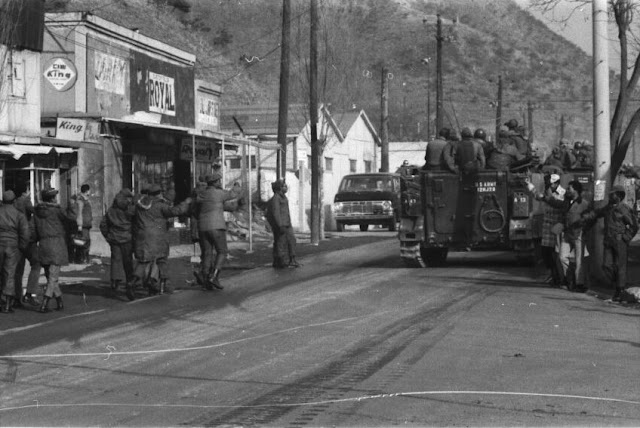 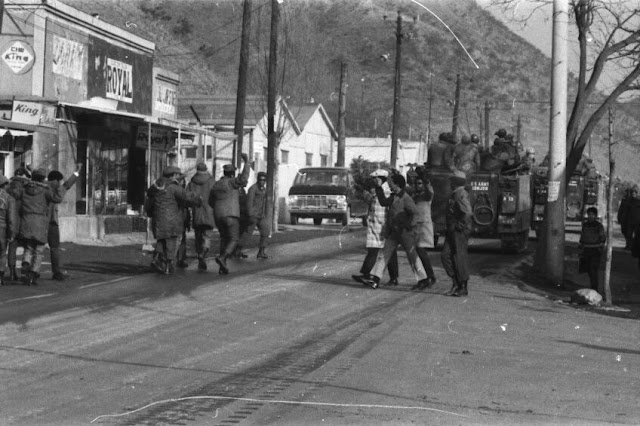 In fact, the Korea Times' photo of the APCs shows the soldiers walking on the right: 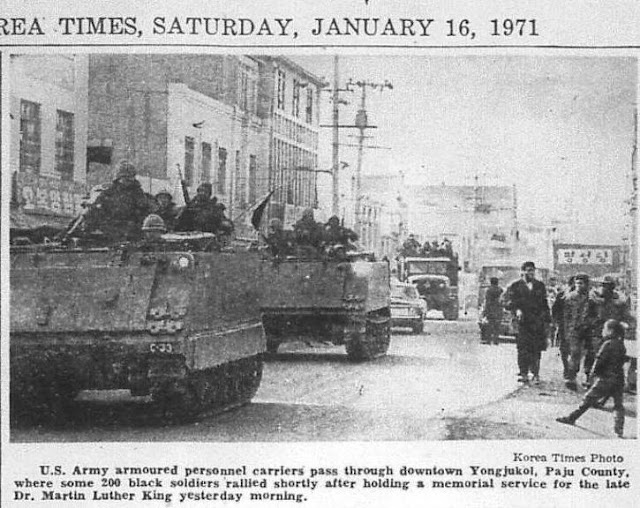 As the photographer described it, this photo shows "a helicopter that was orbiting the site": 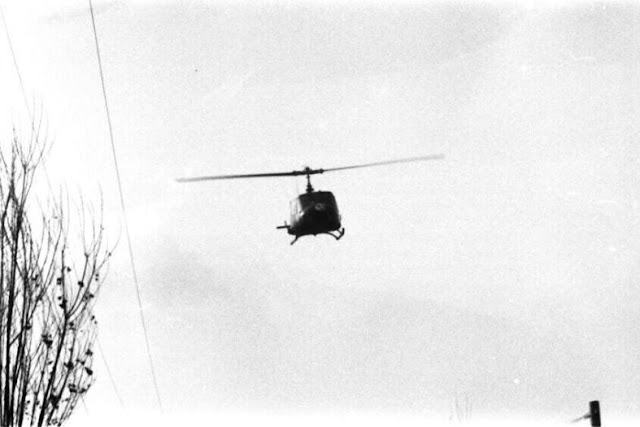 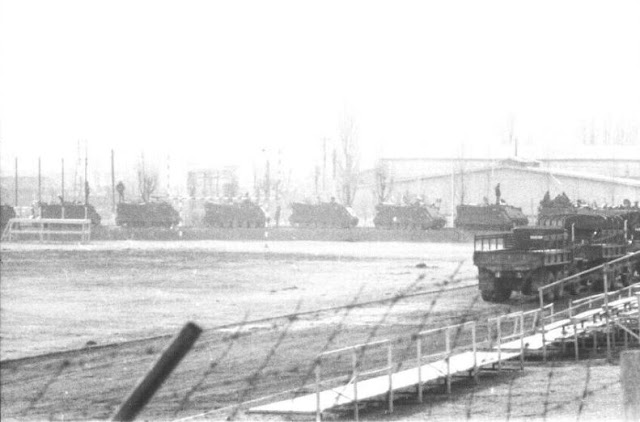 There are 3 more photos that, with the one above, make a panorama showing that the football field was half-ringed with APCs, of which I could count at least 23.

A series of photos, including the one below, was described as showing "some troops in what appears to be a riot-control formation. I guess they were practicing." 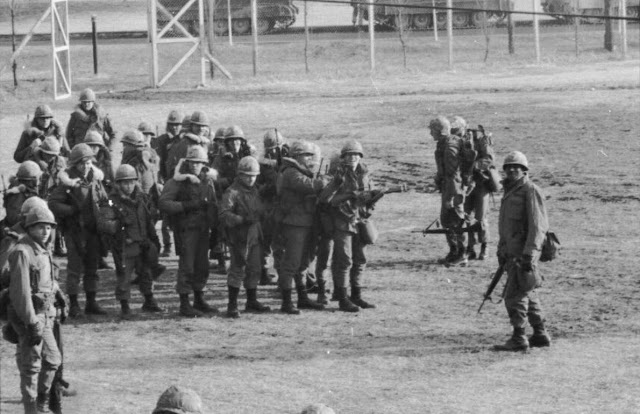 It's unfortunate there aren't any photos of the club where the soldiers ended up continuing the rally, or of soldiers blocking entrance to it. What is clear, however, is that USFK authorities barred press from attending the initial rally at RC 1 and mobilized MPs, soldiers in 30 APCs, and helicopters to intimidate participants or stifle the rally after they left RC 1.

While the US military's response to the violence at Camp Humphreys six months later was to criticize the role Korean racism played, little was said in regard to the way in which USFK consistently stifled and suppressed rallies by black soldiers against discrimination that year, including this one and others in Seoul and Busan. A subsequent post will deal with these, and the way they led to the Anjeong-ri race riots.


As for where this rally to commemorate Martin Luther King took place, here is a map I made of the area, which is a 5-km drive east of Paju Station. 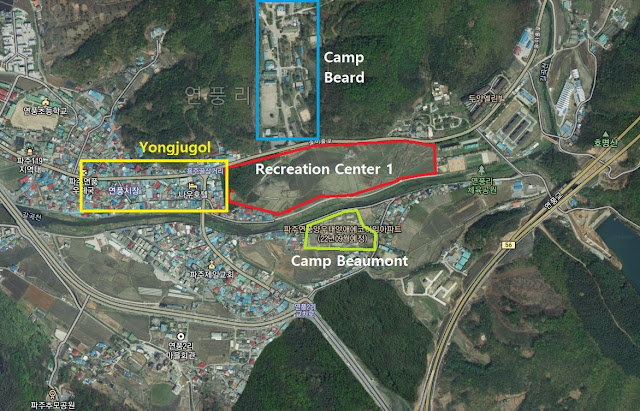 Photos of the Yongjugol area taken in the early 1960s can be seen (particularly if you follow the links) at this page about Camp Beaumont, and some basic information about Camp Beard is here. While written information online about Recreation Center 1 is sparse, there is a lengthy film of it taken in mid-1970 here (shown below). All of these camps have long since closed. The more recent Yongjugol red light district mentioned in this article is south of the stream from the 'Yongjugol' marked above, and served Korean soldiers stationed in the area.