Anti-war protest by GIs in Seoul in 1971, and my article on USFK race relations that year in the Korea Times

Yesterday, my latest Korea Times article filled in some of the events that occurred between the January 15, 1971 rally in memory of Martin Luther King held in Paju and the Anjeong-ri race riots of July that year, which I wrote about here and here.

Since writing that article a week or so ago, I began looking through the Stars and Stripes archive to discover that the story was far, far more complex (and covered in far more detail), than I had imagined. The incident at Camp Kaiser in May 1970 where various fires were set around the base seemed to be point where race relations became something to be concerned about in Korea, at least according to articles written later that year.

The army reacted by setting up different councils to try to address the problems on base, and tried to work with club owners to stop segregation in clubs. But some of the articles made clear that things were pretty dire at the time: racist graffiti in latrines, crosses burned onto blankets of black soldiers, which suggested Klan activity, areas of Dongducheon that black soldiers declared their own and essentially made off limits to white soldiers on pain of beatings, a bomb attack on a club frequented by black soldiers in Paju in the months after the January 1971 MLK rally, an earlier series of firebombing attacks at Camp Humphreys and in Anjeong-ri in April 1971 that predated the grenade attacks of May and the race riots of July, and the list goes on. Interesting as well is the fact that the Korean press sometimes provided details that Stars and Stripes did not, but Stars and Stripes also noted that the Korean press tended to sensationalize these events. They also - and this is true in the case of the Korea Times - tended to put the blame for these events on the black soldiers.

Needless to say, there's far too much there to cover in a post, and it will take time to sift through these articles. Something I covered in my KT article that can be dealt with in more detail at the moment is the May 17 anti-war protest by GIs in Myeong-dong. Here is the report on the protest published in Stars in Stripes on May 19, 1971:

SEOUL — Thirty-one American soldiers were arrested by Korean police Monday night after an anti- Vietnam war march through the streets of downtown Seoul.

The soldiers were taken to a nearby police station after Korean police arrested them in the Myongdong entertainment district in the center of the capital.

No violence was reported.

It was believed to be the first public organized antiwar demonstration by American soldiers in Korea, although in the past individual soldiers have worn black armbands in protest against the war.
The soldiers were released to American military policemen late Monday night after being questioned for three hours at Chung Ba Police Station where they were charged with blocking traffic and assembling without a permit, according to a military spokesman.

There was no violence observed during the demonstration which began at about noon with five soldiers silting on the steps of a downtown Seoul building. By 5 p.m., about 30 others had gathered. All wore black arm bands and demonstrated peacefully, attracting crowds of several hundred curious Koreans before police led them away without incident to waiting vans.

The demonstration, which leaders had earlier said they expected about 500 soldiers to join, had been planned for two weeks, they said. Printed flyers, criticizing the Indochina war and urging participation in Monday’s demonstrations had been distributed to most major U.S. military camps in the republic. Attempts also were made to elicit Korean University students' support for the anti-war rally, according to students.

At least two Koreans did join with the protesters briefly but were led away by Korean police almost immediately. Three other persons, who identified themselves as American military dependents also participated but were not taken into custody.

Demonstrators said they had gathered solely to protest the Vietnam War and to show their support for recent Washington marches. They were careful to stress that in no way were they demonstrating against Korea or the American role here, but were acting only as "concerned Americans wanting to end the Indochina debacle."

The soldiers were released in groups at about 11 p.m. from the police station where they said they had been questioned by men identifying themselves as Korean Central Intelligence agents.

As they were being trucked away to the Yongsan Provost Marshal's office they reported that they had been treated well, although they said they had not been allowed to contact American authorities or been advised of charges against them.

Police at the station refused admittance to reporters and police officials would not comment on the incident, saying only that "an investigation is in progress."

Army officials to whom the protesters were released said Tuesday morning that all of the men had been released to their units. The military spokesman was not able to comment on what further action might be taken against the men, but official legal sources here said any measures would probably be a matter for the Koreans to decide under the Status of Forces Agreement, because apparently the protestors had violated no American military statutes.

AP reported Korean onlookers showed no reaction to the antiwar march but called the marchers “Yankee beggars," apparently referring to their clothing.

(Korea is a staunchly anti-Communist, country and about 50,000 Korean troops are fighting in Vietnam in support of the Saigon Government.)

One wonders what the KCIA agents thought of the protest.

Here is a photo from the Korea Times: 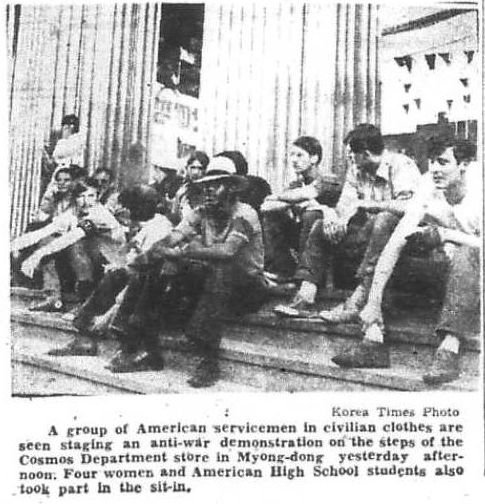 Below is a photo from the May 18 Maeil Gyeongje, which played down the number of protesters ("around 10"), focused on the black soldiers present, and said the sit in only lasted one hour: 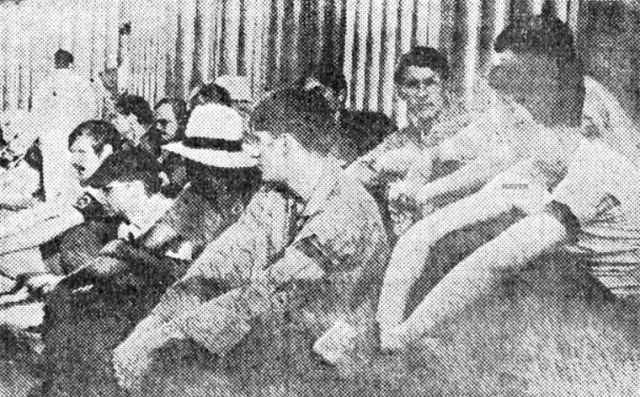 Below is a photo from the May 18 Kyonghyang Shinmun, which reported that around 5:15 pm Ernest Hirst (22) and about 30 other US soldiers in civilian clothes and wearing black armbands gathered in front of the Cosmos Department store in Myeong-dong and had flyers calling for an end to the war in Indochina. Then then marched for ten minutes to the Chosun Hotel and held a sit-in there until police convinced them to leave, so after that they returned to Myeong-dong where they held a silent protest for 3 hours. Gwon Yeong-ok (20), who lived in Chongsin-dong, joined in the demonstration briefly with three other Koreans and they were all taken to Namdaemun Police Station where they were released after a warning. 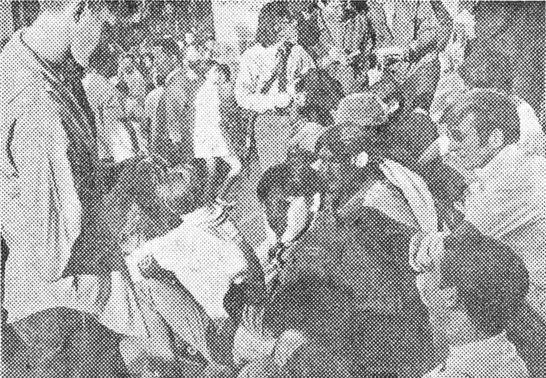 Below is a photo of the protest from the May 20 Stars and Stripes:

Stars and Stripes reported that day that Korean police had decided not to charge them; whether USFK would charge them was still being decided. 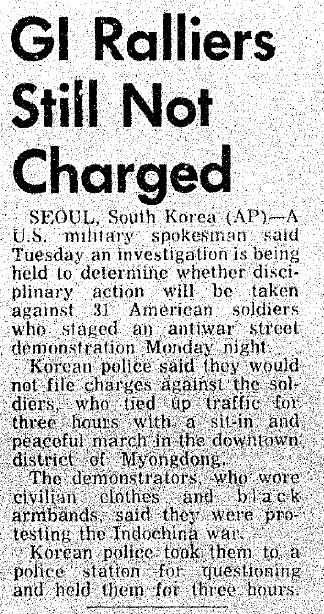 I haven't found any reports after this discussing the matter, so one assumes USFK authorities let it drop.

I would certainly be curious to hear first-hand accounts of this protest.
Posted by matt at 3:01 PM

It had to be in the first line, didn't it? Thanks for catching that!