Today is the 39th anniversary of the Kwangju Uprising.

I've written quite a bit about the uprising in the past. A brief timeline is here, and there are also background posts about the situation in 1979 leading up to Park's assassination and Chun Doo-hwan's 12.12 coup. I've written more in-depth looks at the events of the uprising, such as the violence on the first day, the escalation of violence over the first three days, forcing the military out of the city, as well as an analysis of US news reports from May 22. I also looked at the retaking of the city by the military and the death toll.

A bibliography of books in English about the uprising is here, links to literature inspired by the film are here. A series I started last year titled "The 1980 Kwangju Uprising and the United States" begins here.

Last weekend I had dinner with Paul Courtright, a former Peace Corps Volunteer who was one of four PCVs who were in Kwangju during the uprising. The others were Tim Warnberg (who wrote the first journal article about the Uprising, "The Kwangju Uprising: An Inside View," in 1987), David Dolinger (who I've met on several occasions and who has left comments on this blog about his experiences in 1980), and Judi Chamberlin.

Courtright has been working on a memoir of his experiences during the Kwangju Uprising, and during his visit to Korea, he planned to spend time in Kwangju brushing up on his Korean and visiting some of the sites to jog his memory. Instead, he was shocked by the current lack of understanding of what happened during the Kwangju Uprising and the prevalence of the belief that North Korea was involved. As an example, here is a poster at a conservative rally March 1 which purported to use facial recognition technology to reveal that leaders of the citizens' army in Kwangju were people who are now in Kim Jong-un's circle: 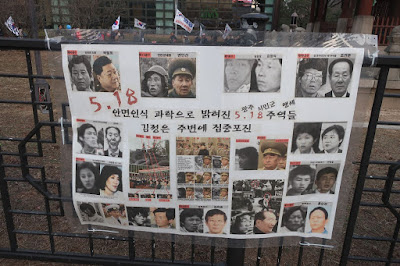 As a result of such misunderstanding, he has been giving interviews to try to share what he witnessed. He was interviewed by the Korea Herald and by the Kwangju Ilbo, which published two articles about him and what he saw. One article was about his experience during the uprising and why he was writing the book, while another article was about what he witnessed when he rode his bike into Kwangju from the south on May 22. As he put it in the Korea Herald article, "when I came across the soldiers (between Gwangju and Nampyeong), there were a number of buses and cars that were full of bullet marks. They were completely bullet ridden and there was blood everywhere.” The bodies were nowhere to be seen, and some of the buses were being used for a roadblock. While the shootings of at least two other buses by the army is well known (28 people died in two bus shootings on the outskirts of the city on May 23), it appears shootings at that location are not. The Kwangju Ilbo also published an article on the need to shine a light on the activities of the PCVs during 5.18 (something, since both Courtright and Dolinger have told me a number of stories, I'll write about in a later post).

I should add, however, Dolinger's account of military helicopters when he returned to Kwangju on May 21:


As I walked towards the center of town I was greeted by the sound of helicopters. With their approach the people in the streets all headed tor cover. Troops in the helicopters were firing on the citizens. The next day I saw the results in the hospitals. Patients with wounds entering in their shoulders or chests and exiting from the hips and lower backs. People paralyzed. The helicopters brought fear, maiming and death with their sound.

One story I was not aware of, but which recently had more light shed on it by Jon Dunbar, was of a helicopter firing on a building with a newspaper office in it. To this day one floor of the building still has the bullet holes in the walls and ceiling, and after restoration of the building that floor will be preserved as evidence of the shooting.

The Kwangju Ilbo also published an editorial on new information coming to light this week about 5.18. In addition to Courtright's testimony about the bus shooting, Kim Yong-chang, a former agent of the U.S. 501st military intelligence brigade, gave testimony at both the National Assembly and the May 18 Memorial Culture Center in Kwangju.

As reported by the Korea Times, Kim retold a story he had previously told during an interview with JTBC in March, and said he "decided to break his silence because attempts are still being made to distort the truth about the movement" (ie. 5.18). The story was a rather important one:


Kim reiterated that Chun [Doo-hwan] secretly came to Gwangju on May 21, 1980, by helicopter to meet four military leaders including Chung Ho-yong, then-commander of special operations, and Lee Jae-woo, then-colonel of the Gwangju 505 security unit[.]

As the Korea Herald reported his testimony,


“Chun came (to Gwangju) at around noon on May 21 (1980). He attended a meeting, including then-commander Jung Ho-yong. This is the unchangeable truth. I do not know the conversation they had (in the meeting). A mass shooting took place in front of the South Jeolla Provincial Government Office at around 1 p.m. Based on reasonable assumptions, the order to shoot was given at the meeting[.]” [...]

Heo Jang-hwan, a former investigator with the Gwangju 505 Security Unit during the uprising, said: “I saw the shootings myself. The ‘sit-down shooting’ posture is not for self-defense. Chun had ordered (the soldiers) to shoot (civilians).”[...]

Addressing the narrative that ordinary citizens used violence against soldiers, [Kim] said, “There were undercover soldiers [acting as agent provocateurs to discredit the movement]. About 30-40 soldiers came to Gwangju from Seongnam Air Base around May 20 (1980). They stayed at the K57 hangar for about two to three days. Upon receiving the tip, I went to the hangar and checked it out myself.”

According to him, the undercover soldiers were in their 20s and 30s, and some of them wore wigs and worn-out clothes.

He dismissed the idea of North Korean infiltration, saying the US would have noticed any large-scale infiltration, in part due to the fact that "Two US satellites specifically focused on North Korea and Gwangju." The above-linked article also includes a photo of "a deserted boiler room where [Kim] alleges bodies of killed protesters were incinerated...during a visit to the site of a former military hospital." This is interesting, considering former Peace Corps Volunteer Tim Warnberg wrote in the article, "The Kwangju Uprising: An Inside View," that on May 26

It seems clear something was going on with bodies at the hospital. Perhaps two different disposal methods were used; Warnberg's conversation with a direct witness seems more a more trustworthy source.


Kim's testimony also raised questions about what the US knew or did not know about events in Kwangju. As reported in the Korea Herald, Kim was "one of the four experts dispatched to Gwangju during the May 1980" who, the Korea Times said, "was in charge of reporting facts and information he received from his informants in the South Korean government and military to the U.S. military." It is also said [in the Korea Herald] he reported to the US Department of Defense.

It adds that he "filed 40 reports to the US officials...[which] included the military’s corpse disposal, helicopter shooting, sexual assaults and takeover of Gwangju Prison." As well, "three of [the reports] were read by then-US President Carter."

Finding out more about these reports seems imperative. What were their detailed contents, did Carter read any, if so, when, and what did they contain - there are many questions to be answered.

Tim Shorrock summarized the Defense Intelligence Agency reports on the Kwangju Uprising and found them to be far more detailed and aware of what was going on than the embassy. They can be found under the heading "H1. DIA Kwangju Reports" here. Shorrock stated that "Some of the reports were received from an U.S. Air Force intelligence officer stationed at the nearby Kwangju Airbase, but others appear to be written by U.S. intelligence officers stationed in Seoul." Unless Kim was a source for the USAF officer at Kwangju Airbase, it's unlikely these were based on his reports. More to the point, it is hard to imagine Shorrock would not have mentioned the "military’s corpse disposal, helicopter shooting, sexual assaults" that Kim asserts he wrote about had they been in the DIA reports.

A reading of the US Embassy - State Department cables (those for May 1980 can be read here) reveals that, when it came to events in Kwangju, the Embassy was often reliant on distorted information gleaned from Korean media reports and the ROK military (both of which were controlled by Chun Doo-hwan). It would seem that the US military had access to more accurate information, but whether this was shared with those making the political decisions in Seoul and Washington is not yet known, but should be looked into.

I recently read a comment saying something along the lines of "Isn't this settled by now?" This week has shown that there is more yet to learn about the events of May 1980.
Posted by matt at 8:27 PM