My latest article for the Korea Times, about comic book reading rooms and the censorship of comic books in the 1960s and early 1970s can be found here. Perhaps things have changed very recently, but two years ago when I tried to find academic articles on this topic, I found nothing in either Korean or English, though I imagine there must be something in Korean somewhere. I had previously thought the crackdown on comic books was more a product of the Yusin (1972-79) era, but discovered that was not the case. The pertinent photos I was able to discover in my Korea Times archive are posted in the Korea Times article; this one is certainly memorable: 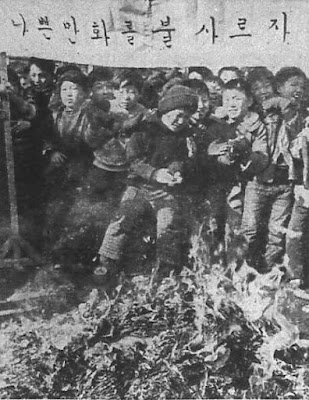 This particular bonfire occurred at the elementary school attended by Jeong Byeong-seop, the 12-year-old boy who hung himself in imitation of a comic book character in early 1972.

In the aftermath of his death, Police in Seoul seized 20,400 "bad comics"; below is a photo of 8,600 seized by Dongdaemun Police Station: 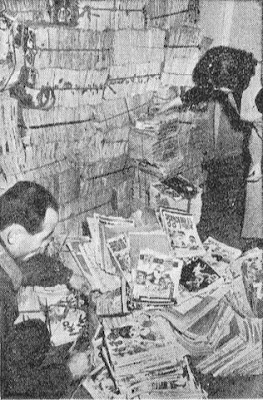 Even more memorable is this video taken at the time:

Also in my research I've come across newspaper cartoons' take on political and cultural events. One event that was well-covered the first crackdown on long hair on men in August 1970. Of the half-dozen cartoons I've found, Kobau is the most memorable (published August 29, 1970 in the Donga Ilbo): 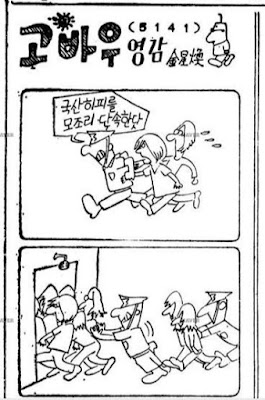 "We're cracking down on all the Korean hippies." 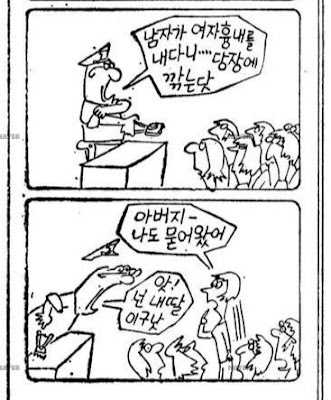 "Men who are imitating women will have their hair cut right now."
"Dad, I was brought in too."
"What?! You're my daughter!"

(One of the many criticisms of this initial hair crackdown was that the standards for determining what constituted "long hair" were so vague as to be meaningless, though the cartoonist in this case is probably focused more on a 'they look like girls' joke than anything else.

For more on Kobau and other newspaper cartoons of the time, see the rather informative Korea Times article from October 1970 I uploaded here.

Kobau was also featured a great deal in the cartoons US ambassador Philip Habib sent in a cable to the State Department in March 1973. This came just months after the advent of the dictatorial Yusin constitution, and according to Habib they were about the only public source of criticism, mild as it was, of government policy at that time. Habib's cable, which was part of  a collection of such cables at the National Assembly Library website, can be read here.

I know of one person who was doing their PhD dissertation on newspaper cartoons from this time (particularly Kobau and its cartoonist, Kim Song-hwan). Considering newspaper cartoonists' role as critics at that time, as well as the efforts the government made to control children's comic books (as well as the popularity of webtoons in Korea today), the story of the comics industry from the 1950s to the 1980s deserves more attention.
Posted by matt at 10:20 PM

Interesting article. Thank you for sharing.