The 2018 Seminar for Foreign Language Institute Instructors in Gyeonggi

On October 30 the Korea Times published an article on this seminar, for which I was interviewed, titled "Foreign teachers told 'Don't molest students.'"

Fellow blogger Zen Kimchi was forced to attend a training session for foreign hagwon instructors this weekend. At 8am on Saturday. In Icheon. He managed to salvage something from the fustercluck by writing about the experience here.

I seem to remember something similar occurring in Seoul when I worked at a hagwon over ten years ago. It may have been organized by the hagwon owner's association or perhaps by the local district. I was told I had to attend the training session early on a Saturday morning. I believe we were told it was mandatory. I told my boss I'd try to make it. I didn't try very hard, and never heard a thing back about my absence. I read later (or perhaps it was about a similar such session) of teachers being told to salute the Korean flag, and a few teachers complied...with sarcastic Nazi salutes.

There has been a legal basis for such training sessions for years now. In November 2009 National Assembly Representative Cho Jeon-hyuk submitted bills to revise the hagwon and school laws so as to require foreign teachers to take a class on Korean culture and practices. “He said the revisions are aimed at raising the quality of the nation’s English education programs by mandating that foreign teachers have better knowledge of Korea.” This was eventually included in a revision of the hagwon law passed in June 2011. As the pertinent revision read,

The amendments to the hagwon law in 2011, which not only mandated cultural classes but also drug tests for foreign instructors, were first suggested in 2009 during a period of intensely negative media coverage of foreign English teachers. Such negative coverage began in 2005 during the English Spectrum incident, when media attention was drawn to an online forum called English Spectrum, where foreign English teachers bragged about their sexual conquests and posted photos of a party featuring foreign men and Korean women dancing together. Outraged by the impropriety of both parties, netizens formed an online café called Anti-English Spectrum and, over the next few years, managed to unearth stories of misbehaving foreign teachers, share them with the media, and then petition lawmakers to change relevant laws by citing the articles they had contributed to. They were ultimately invited to a Ministry of Justice policy meeting in 2007 where they convinced the ministry to institute HIV tests for foreign language instructors on the E-2 visa.

As the number of foreign teachers rose, peaking in 2011, fears of foreign teachers committing crimes, especially sex crimes against children, were stoked by journalists and politicians. One standout example of media bias occurred in 2013, when the story of a foreign teacher suspected of having sexually assaulted a minor who was extradited to the US was covered by 80 news articles – half of them TV news reports. In contrast, during that week the case of a Korean elementary school vice principal who was sentenced to 6 years in prison for molesting nine elementary school students appeared in only 14 news reports – none of which were on TV. Despite a dramatic decrease in media scrutiny since that time, the education program the hagwon teachers were subjected to this weekend reveals that these attitudes are still alive and well among officials. 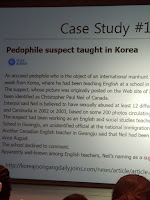 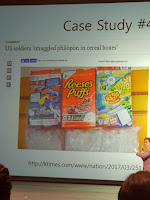 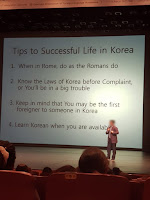 (Thanks to Joe for letting me repost these.)

As well, it is not clear what power those running the session have to penalise hagwons for their instructors not attending. There is nothing in the law itself which allows for such penalties. Overall, reading Joe's account, I'm left remembering Homer Simpson saying "It's the least I could do. Well, actually, the least I could do is absolutely nothing, but I went one step further!" Or something like that. I could ask, "How hard would it be to find some qualified people to give presentations that might actually be relevant and related to the ostensible purpose of the seminar?" But that would require putting in some effort and perhaps even - shudder - talking to some foreigners and asking (and actually listening to) their opinions rather than just using them as rubber stamps for already-decided on policies.

The handout for the seminar is worth looking at: 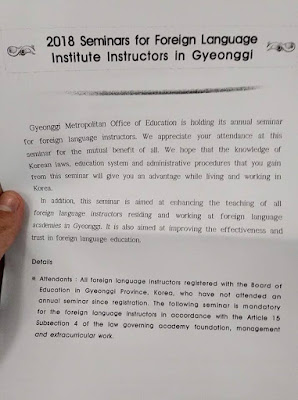 (Thanks to Joe for permission to re-post this.)

I found this interesting: "It is aimed at improving the effectiveness and trust in foreign language education." Clearly the former was not much of a concern, so perhaps the latter part I put in italics is. Because no trust in foreign teachers hurts the hagwons' bottom line (unless creating distrust of foreign teachers is part of your sales pitch). Much more worthy of note is the law used to justify the seminar. Compare the article and paragraph they cite to what I cited above and you'll realise (if you check the law) that they could not be bothered to even cite the correct part of the law!

Overall the "training" session sounds like a pro-forma attempt to follow a rule seen as annoying by both those subject to it and those tasked with implementing it. (Which probably sums up the entire E-2 visa process, except for the hospitals making money off of administering the health checks (still complete with the HIV tests that were supposedly gotten rid of).) The half-assed, ill-thought out program which was interpreted by many attendees as “please love Korean culture, you potential child-molesting drug addicts” may have indeed taught the foreign instructors something about Korea, but it probably was not the lesson the education authorities were hoping for. If those in charge can't be bothered to do their jobs, why should the foreign teachers feel any different?
Posted by matt at 3:10 PM