If you walk along Daehangno about halfway between Jongno 5-ga Station and Hyehwa Station you'll come upon the gates to Seoul Sadae Buseol Elementary and Girls Middle School. 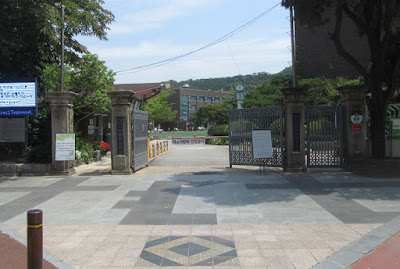 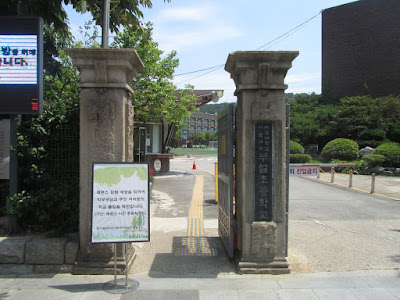 These gate pillars originally stood at the entrance to Pagoda (now Tapgol) Park, Seoul's first modern park, built under the direction of John McLeavy Brown in 1897. [Hat tip to JiHoon for showing this to me.] About the only photo of the gates I've ever seen is this one from the time of the Samil Uprising in 1919: 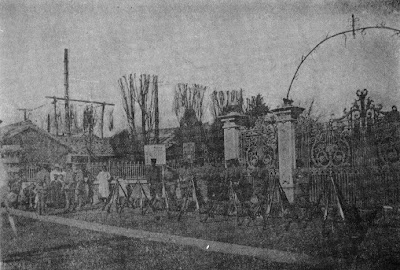 I originally posted that photo in this post, which includes photos taken from this page, which has scans of a 1919 Korean Red Cross pamphlet about the suppression of the Samil independence movement. It includes the declaration of Korean independence, 34 photos (taken by Francis Schofield), and a statement from the Korean Red Cross. It was in this park, of course, that the declaration of independence was read on March 1, 1919.

Before the park was built, the ten-story pagoda it is named after stood surrounded by houses, as captured by Percival Lowell in 1884: 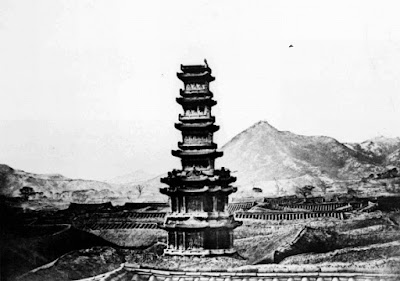 Many more photos of the pagoda from both before and after the area became a park can be found here, while Brother Anthony has posted a detailed history of the pagoda (and another that it was modeled after) here.

I hadn't realized the fate of Wongaksa, the temple it was built to be a part of. As Wikipedia reveals, King Sejo had Wongak-sa temple built in 1465, followed by the pagoda 2 years later. on the site of an older Goryeo-period temple, Heungbok-sa. The temple was closed and turned into a kisaeng house by Joseon's most notorious king, Yeonsan-gun (who ruled from 1494 to 1506), and his successor, King Jungjong (ruled 1506–1544) turned the site into government offices.

This was actually part of a spate of temple building / improvements by King Sejo, as Gregory Henderson explained in his 1959 article for Transactions of the Royal Asiatic Society, "A History of the Chŏng Dong Area and the American Embassy Residence" (available as a .docx file here - more Transactions articles can be found here). He made a specific addition to Hŭngchŏn-sa, a temple which stood near present day Deoksu Palace:


In 1462, King Sejo, a devout Buddhist, deeply conscience-stricken over his murder of his own nephew Tanjong to attain the throne, repaired and built many temples, notably Wŏngak-sa in Pagoda Park with its pagoda; with these repairs he had a great new bell made for Hŭngch’ŏn-sa in the seventh year of his reign. For more than thirty years the temple continued with this embellishment and with its high tower. In 1495, however, there came to the Korean throne one of the most notorious tyrants of Korean history, Yŏnsan-gun, a man dedicated to sybaritic personal habits, malice and impetuousness. In July, 1504, he ordered the temple razed and built in its place an extra office for the care of his royal horses and their accoutrements. The next monarch, Chung-jong, after overthrowing Yŏnsan-gun, abolished this extravagance and built a public office here. Of the temple, only the five-story shari hall remained.

Of that five-story hall, Henderson tells us that on


the night of March 28, 1510, the students of th[e] central Confucian college, firmly convinced by their instructors that Buddhism was heresy, marched on the shari hall and enthusiastically set fire to it. [...] The bell now alone remained and this, after many perigrinations through Seoul’s palaces, finally came to the grounds of the Tŏksu (Duksoo) Palace where it hangs today, the only remaining reminder of this temple’s colorful history.

And that's the history of the bell (this one, from this page) that you can see in Deoksugung Palace today, which was cast around the same time as the Wongagksa Pagoda in Tapgol Park was built, the park which saw its original gate pillars moved to an elementary school on Daehangno. A bit of a detour, but hopefully the ride was worth it.

I'll save the story of one of the architects of Yeonsan-gun's overthrow, and his tomb behind where I used to live in Banghwa-dong, for another day.
Posted by matt at 4:11 PM