There's an issue of the British illustrated magazine The Sphere from 1945 posted at Ebay which has an interesting image of Seoul (click on the third image here - hat tip to Hamel): 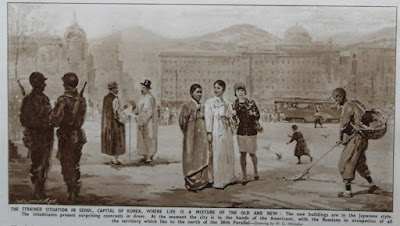 One gets the idea it's supposed to be at what is now Seoul Plaza in front of City Hall, but the building at center appears to look like the Bando Hotel (which stood where the Lotte Hotel is now, and was certainly taller than City Hall), but on top of it is City Hall's tower, and the building at left is topped by Seoul Station's dome. An odd choice, especially considering the artist must have based the painting on actual photos.

On the other hand, It's not like the Seoul Metropolitan Government hasn't done the same thing, in a manner of speaking (Coex - among others - next to Cheonggyecheon?)... 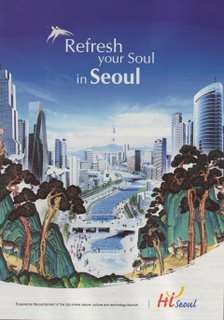