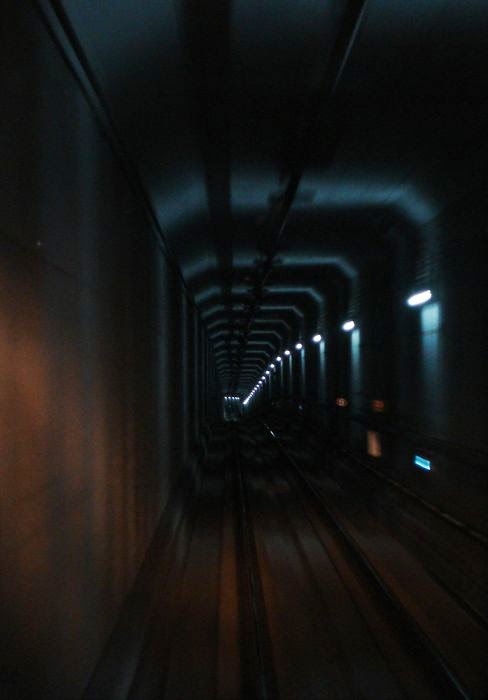 Line 9's extension from Sinnonhyeon Station to Sports Complex Station on line 2 officially opens today (they seemed to be doing trial runs to the latter station in recent weeks; last week I got on at Gimpo Airport and the announcement and on-train information screens both said it was heading to Sports Complex). In late January they changed the schedule to prepare for this opening, going from one express train for every two all-stop trains to a one to one ratio. While this meant more express trains, it also resulted, as Kojects tells us, in there being 60 less train tripss per day, and intense overcrowding at rush hour, as this JTBC report on the 'hell train' - translated at Korea Bang - tells us.

This all looks rather familiar. While I was lucky enough to be able to take the express train towards the tail end of morning rush hour (catching it between 8:10 and 8:25), I used Line 9 to commute to work for five years, and it was still quite crowded at that time of day. The report notes that the most crowded stretch is between Yeomchang and Dangsan, and that doesn't surprise me; my commute ended at Yeomchang, and I was always amazed at how crowded it got, sometimes having to fight my way off the train (much more aggressively after once being pushed back onto the train and having my foot drop into the gap). Another memory that stands out is seeing people cram on at Gayang Station (the express stop between Yeomchang and Gimpo Airport) and seeing a man leaning at a 45 degree angle as he pushed the people ahead of him onto the train. The only way to ensure I could get off was to stand next to the door when I got on, otherwise it would likely have been impossible.

One problem leading to overcrowding is that there are only four cars in each train, while every subway platform has room for at least eight cars. At this point, the solution won't be more trains running, but more cars on each train. Unfortunately, as Kojects notes, 20 new cars won't be added until late next year, with more to follow the following year. Since the new schedule with more express trains was implemented in January, the number of people using line 9 has increased by an average of 2,700 daily, and the projected number of people using it after the extension opens will be 610,000 daily (compared to 250,000 in 2011, when more trains were added). For now, one rush-hour measure by Metro 9 has been to operate express buses, but I hardly see how useful they'll be in rush hour traffic. 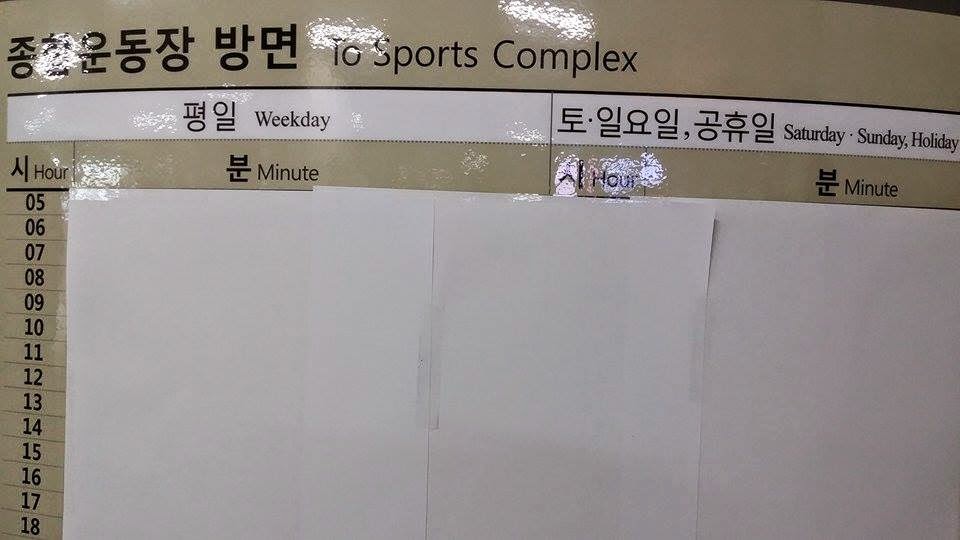 Covered up schedule for trains to Sports Complex at Sinnonhyeon Station yesterday (hat-tip to Ami).
Posted by matt at 3:50 PM

Interesting to read the experiences of someone who uses the line regularly. I recently saw a current affairs item and have heard from friends that the all-stop trains are actually bearable, even during peak hour. It seems that everyone just wants to only take the rapids. Have you had similar experiences?

Yes, I've found that the all-stop trains might get crowded at peak hours, but have never been that bad compared to the express trains, which are often crowded once you get a few stations in from either end of the line (Yeomchang when you head east, and Sinnonhyeon or Express Bus Terminal heading west). Saving time is a big draw, but sometimes I'll just take the all-stop to enjoy a seat.